Opening Day's here - so are our 2018 MLB picks - BaltimoreBaseball.com

It’s Opening Day. I don’t care what the temperature is or what the calendar says – we’ve made it to the real first day of spring.

Dylan Bundy will throw out the first pitch around 3:05 p.m. this afternoon and 2018 – in baseball and Balmer terms anyway – will commence.

Bundy and the Orioles will face the Minnesota Twins, who were the biggest surprises in the major leagues last year, going from 103 losses in 2016 to a playoff spot in 2017.

I didn’t see the Twins’ transformation coming. But, then again, if you recall my predictions from last year, I didn’t see a lot of things coming.

I did correctly predict all six 2017 division winners, but that wasn’t particularly difficult. In contrast, I had the Orioles winning 90 games, finishing second in the AL East and earning a playoff spot. What a ridiculous homer.

Want more from the “Connolly is an Idiot” department?

I selected Ubaldo Jimenez as my biggest Orioles’ surprise for 2017 – seriously. I didn’t think he’d have to do a whole lot to pleasantly surprise a jaded fan base. Let’s just say I was wrong, and now we can all move on.

I’ve come to two conclusions after looking at last year’s BaltimoreBaseball.com’s predictions: 1. I was terrible. 2. We can’t all be Adam Pohl.

Pohl, the voice of the Double-A Bowie Baysox and the host of our wildly popular “Minor League Podcast,” was a veritable Baseball Nostradamus last April. He had the Houston Astros and Los Angeles Dodgers in the World Series, and, thankfully, for our collective sanity, picked the Dodgers to win it all.

So, he ain’t perfect. But Pohl also predicted the Orioles’ biggest surprise would be Trey Mancini and the club’s biggest disappointment, Mark Trumbo.

If you are a betting person, and believe in Pohl a second consecutive year, go to Las Vegas and put it all on an Astros repeat. And also pay close attention to Caleb Joseph this season – in a good way, Pohl suggests.

Here are all of our predictions, including my bold assessment that the Orioles will finish the year at exactly 81-81. I’m playing it conservatively in 2018. 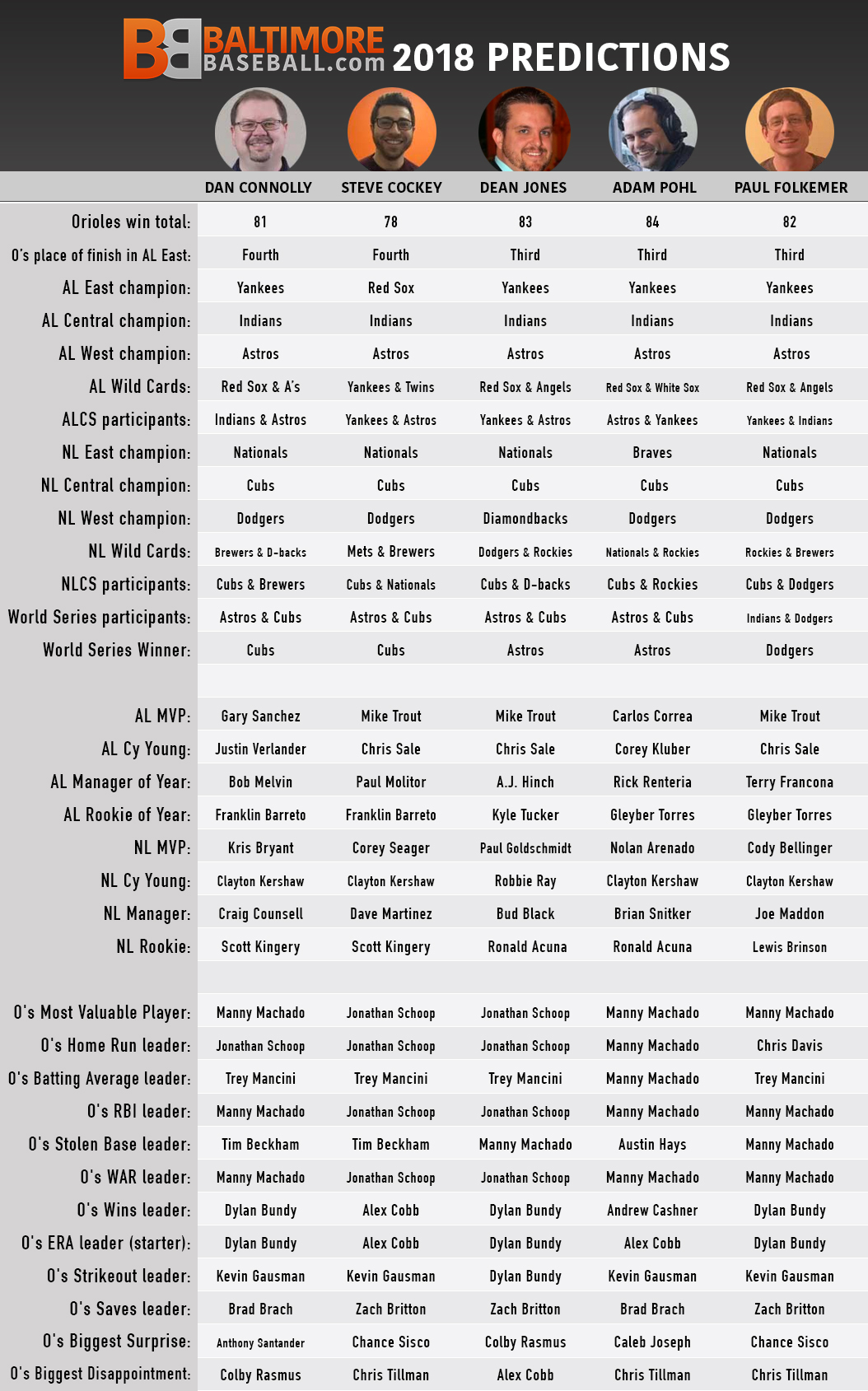