Baseball's back – here are our staff's predictions for the 2017 season - BaltimoreBaseball.com

Happy Opening Day. You’ve made it to another one. Congrats.

Before the first pitch is thrown at Camden Yards, before celebrated tenor Richard Troxell rocks the National Anthem, before you drink your first beer at Pickles or your first fake one at Connolly’s Tap Room, we wanted to share our thoughts on this upcoming 2017 season.

We also don’t want you hold us to these predictions at the end of the year. Please. Be kind.

Because these are just predictions. Shots in the dark with a modicum of knowledge. I never get them all right. I rarely get some of them right (though I was only one Orioles’ win shy in 2016).

But I like reading prediction pieces. And we thought you would, too.

So, we’ve dusted off the crystal ball at BaltimoreBaseball.com. I’ve listed my thoughts on various, rapid-fire questions about the upcoming season – the Orioles, the American League and the National League. So did our site’s founder, Steve Cockey, our minor league writer Dean Jones Jr., Orioles writer Paul Folkemer and minor league podcaster Adam Pohl.

Here are a couple quick explanations on my end:

I could see them winning a one-game playoff this year, but not much beyond that. Just so many good teams in the AL.

Two, it’s not a typo. My pick for the Orioles biggest 2017 surprise is Ubaldo Jimenez. I almost went with Gabriel Ynoa, but my gut says Jimenez has his best year as an Oriole this season. It’s a contract year and he was pretty darn good in the second half of 2016 (not including the Wild Card game). What does surprise mean? Well, I think he’ll be fairly consistent and post a solid ERA – at or under 4.00 – at season’s end. I know, that’s a bit of a limb. But this is supposed to be the surprise category, right?

Three, it’s a bit unfair to predict outfielder Seth Smith, who has yet to play an inning for the Orioles, as the club’s biggest 2017 disappointment. Smith seems like a good fellow, and he can hit. But he’s 34 and missed a chunk of time in the spring with a hamstring injury.

He could be fine and we may not talk about his health for the rest of 2017, but it’s not a good harbinger. Plus, right field has become an Indian Burial Ground of sorts at Camden Yards – it used to be left field – since Nick Markakis went to Atlanta. I just think there’s bad karma there now. (Travis Snider, Michael Bourn, Alejandro De Aza and Gerardo Parra may agree.)

OK, that’s irrational. But so are predictions pieces. Here is ours: 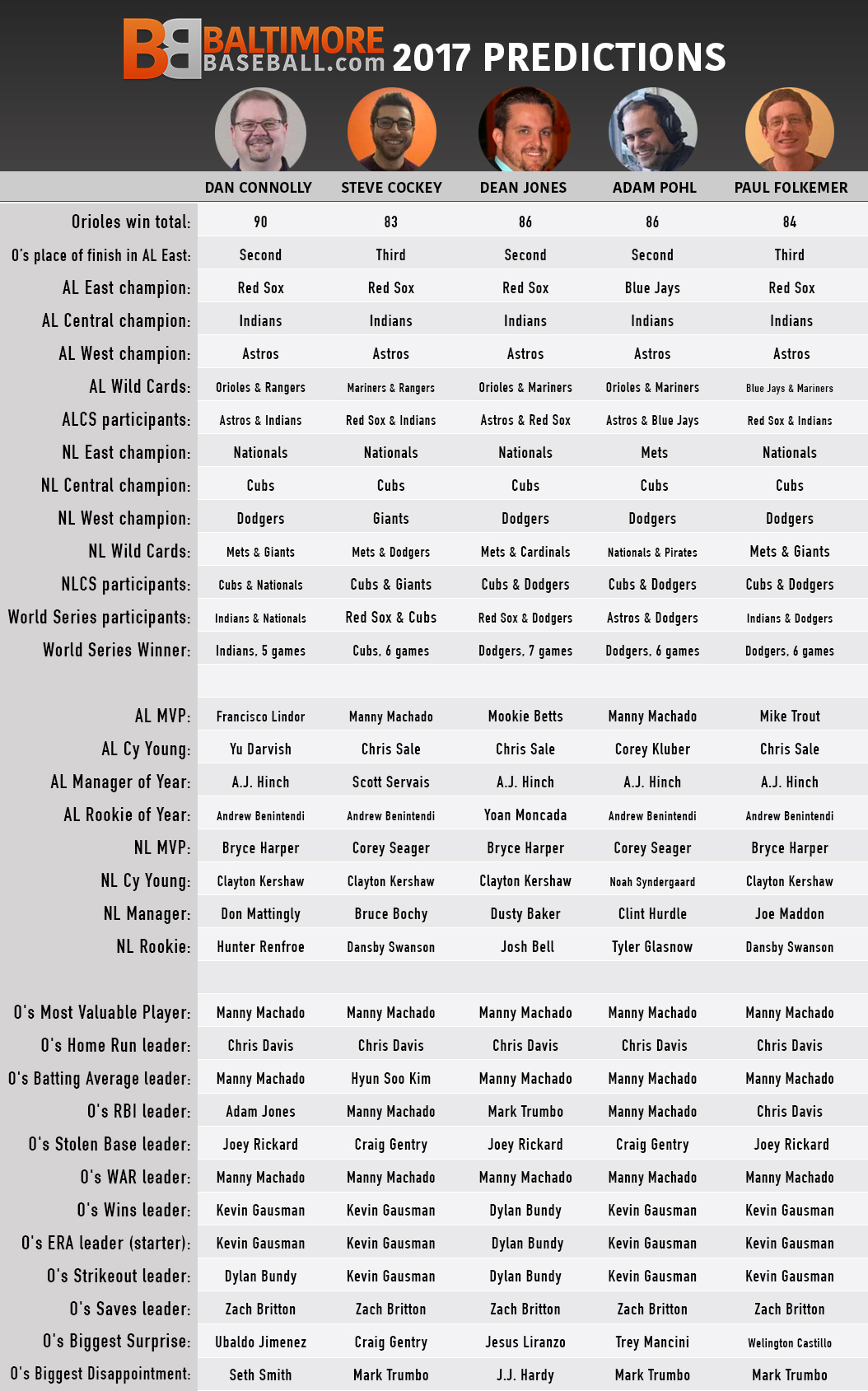