Does Mike Elias face a tougher rebuilding task with the Orioles than with the Astros? - BaltimoreBaseball.com 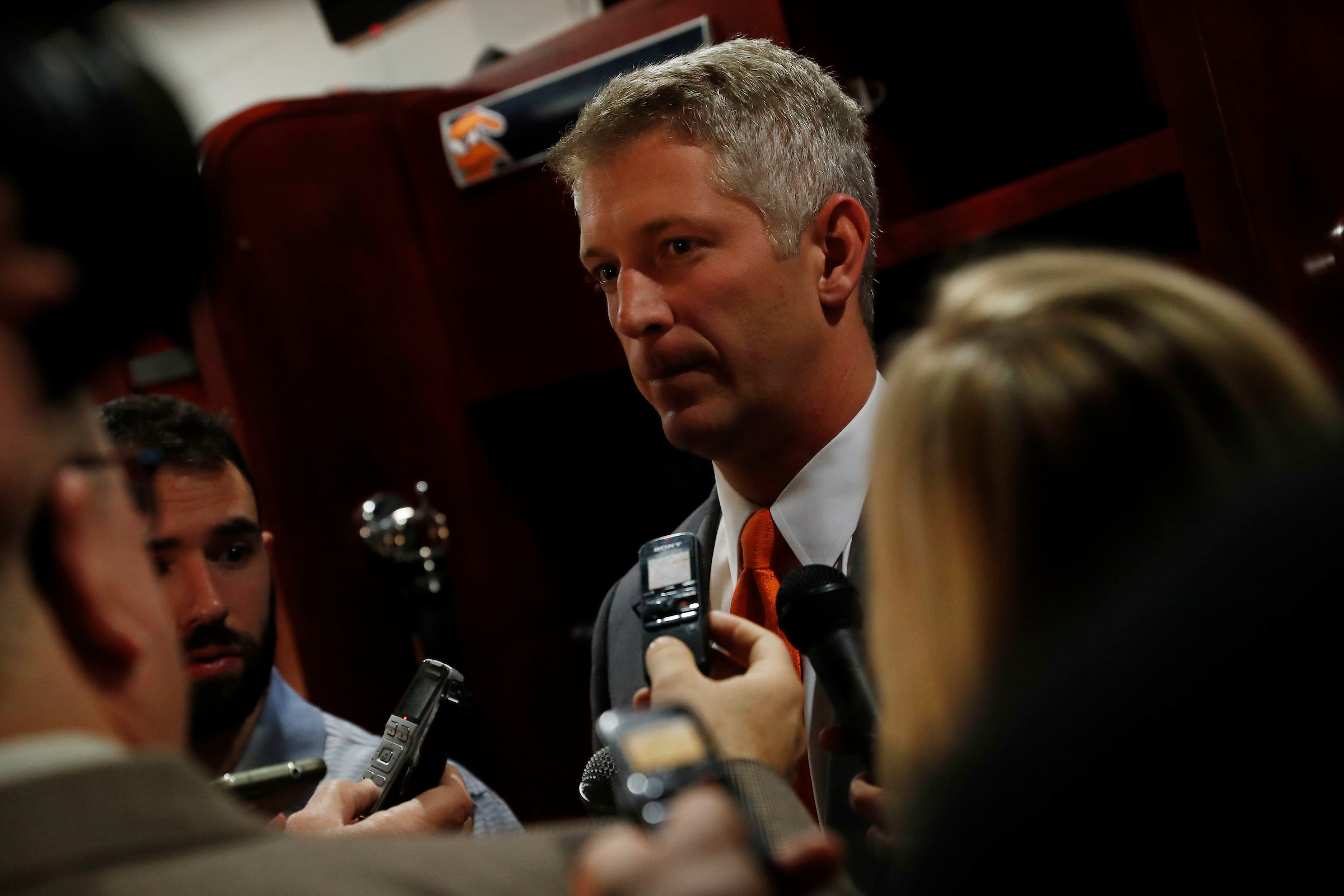 The Orioles’ new executive vice president and general manager is joining the club to spearhead a full-scale rebuilding effort. Elias, who previously served a variety of roles with the Houston Astros — most recently, assistant general manager under Jeff Luhnow — was an integral part of the Astros’ transformation from perennial losers into 2017 World Series champions.

How does Elias’ rebuilding task in Baltimore compare with that of Houston? Are the present-day Orioles in better or worse shape than the Astros were when Elias arrived? Let’s go to the tale of the tape.

Elias joined the Astros after a 2011 season in which they posted the worst record in baseball (56-106) and the worst in their franchise history to that point.

Elias is now joining the Orioles after a 2018 season in which they posted the worst record in baseball (47-115) and the worst in their franchise history to this point.

What can you say? The guy likes a challenge.

If you go back a few years in each case, though, the Orioles have the better recent history of success. The Orioles are just two years removed from their last postseason appearance, when they claimed the second AL wild card slot in 2016. That capped a stretch of five straight seasons in which they made the playoffs three times and finished .500 or better each year, holding the AL’s best cumulative record during that span. Nine Orioles currently on the 40-man roster have played for at least one postseason club in Baltimore.

The Astros, on the other hand, were long removed from their past glory by the time Luhnow and Elias were hired. They’d finished under .500 in four of their previous five seasons and hadn’t made the playoffs in six years. They had only four players on the roster at that point who had played for a winning Houston team, and only two who’d been on an Astros’ postseason club.

While the Orioles and Astros were both at the bottom of the abyss by the time Elias got there, the two clubs got there in different ways. The Astros skidded down the cliff’s edge at a steady pace, scraping every rock along the way, until hitting bottom. The Orioles, meanwhile, sprinted straight off the cliff — Wile E. Coyote style — before plummeting straight down. But hey, they stayed aloft longer than many people expected.

The 2011 Astros finished the season with one of the most threadbare rosters you’ll ever see.

They’d traded away two outfielders in their prime, Hunter Pence and Michael Bourn, during the season, leaving 35-year-old slugger Carlos Lee as their only big bat. Only two Astros who had a Baseball Reference WAR of 2.0 or higher in 2011 — Lee (3.9) and lefty Wandy Rodriguez (2.7) — were still with the club when the new administration took over in December.

Still, that’s better than the Orioles, who don’t have a single active player who posted a 2.0 WAR or better in 2018. The best mark was reliever Richard Bleier’s 1.6 in an injury-abbreviated season, but as a 31-year-old journeyman who doesn’t blow hitters away, his trade value isn’t particularly high. Among position players, Jonathan Villar, who performed well in 54 games after the Orioles acquired him July 31, could entice some interest on the trade market. So too could Mychal Givens, who acclimated himself well to the closer role after taking over in late July.

The Astros ultimately traded Lee and Rodriguez within two years, along with veteran pitchers Brett Myers and Bud Norris and a handful of others. Will Elias be able to find as many trade partners for current Orioles? It won’t be an easy task.

It’s hard to remember now, with the Astros having produced many talented, homegrown players in recent years, but their farm system was in shambles when Elias first arrived in Houston. After the 2011 season, FanGraphs ranked Houston’s system as the fourth-worst in baseball. Just two Astros’ prospects made FanGraph’s top 100 list: first baseman Jonathan Singleton at No. 58 and outfielder George Springer at No. 70.

The Astros’ minor league depth improved almost immediately under the new regime. With the first overall pick of the 2012 amateur draft, they selected 17-year-old shortstop Carlos Correa — largely on the suggestion of Elias, who had scouted him in Puerto Rico. Correa, of course, developed into a star, and kicked off a renaissance for Houston’s farm. By the start of 2015, the Astros’ system was rated sixth-best in MLB by FanGraphs, and by 2016, it was second.

Elias will have similar heavy lifting to do with the Orioles. Despite the club’s flurry of sell-off trades in 2018 under previous executive vice president Dan Duquette, which landed the club 15 new players, the Orioles’ minor league system is still considered one of the weaker groups in baseball. FanGraphs rated them No. 28, ahead of only the Boston Red Sox and Seattle Mariners.

Although the Orioles have a few promising prospects — headlined by outfielder Yusniel Diaz (ranked No. 52 among MLB Pipeline’s top 100) and third baseman Ryan Mountcastle (No. 63) — their system is lacking in frontline talent. Few pundits anticipate the Orioles’ top prospects to emerge as future stars, but rather as solid regulars or complementary players.

The Orioles, like the Astros years before, have a chance to provide a huge jolt to their farm system next summer, when they hold the No. 1 pick in the 2019 draft. Time will tell whether Elias can strike gold again as he did with Correa.

Most rebuilding clubs tend to slash payroll, casting off overpaid veterans and rebuilding the roster with inexpensive young players. That allows the front office to reallocate some of those funds into infrastructure, player development, scouting and other essential departments.

That’s certainly the approach that Luhnow, Elias and other Astros’ decision makers took after arriving in Houston. Their trades of Lee, Myers and other veterans over the next two years helped whittle down the club’s financial commitments. By 2013, the Astros had “an Opening Day payroll of about $26 million, roughly half that of any other club’s,” according to Astroball, Ben Reiter’s account of the Houston rebuild.

The Astros were successful at trimming the payroll largely because even their most high-priced players had tradeable deals. They weren’t saddled with any contracts that were completely exorbitant and unmovable.

Which brings us to the Orioles…and Chris Davis.

Davis, as Orioles fans are painfully aware, is coming off one of the worst offensive seasons in the history of baseball, setting a dubious MLB record for the lowest batting average by a qualified player (.168). He still has four years and $92 million remaining on the seven-year contract he signed with the Orioles in Jan. 2016.

There’s no chance the Orioles will be able to get that money off the books, barring an unexpected Davis retirement. Even if the club took the unprecedented step of releasing Davis outright, they’d still owe him every dollar. Elias said at his introductory press conference that he intends to get involved in Davis’ offseason routine in hopes of helping him improve. It’s the Orioles’ only choice for trying to get some value out of the considerable money they’ve spent.

For as long as Davis’ contract is on the books, the Orioles probably won’t have as much financial flexibility as the Astros did. Still, they’ve already begun shedding payroll in other ways — most notably, Duquette’s salary dump of Darren O’Day in last July’s Kevin Gausman trade with Atlanta — and there’s surely more to come.

No rebuilding process can be successful, of course, without the support of ownership. Not all owners are willing to swallow a scenario in which their club will be purposefully terrible for several years before sniffing contention.

The Astros’ owner, Jim Crane, had no such reservations. After purchasing the Astros from Drayton McLane on Nov. 22, 2011, one of Crane’s first acts was to hire Luhnow, knowing full well what plan his new general manager had in store. Crane was intrigued by Luhnow’s analytics-driven strategy for success, and threw his full weight behind the rebuilding strategy. He allowed Luhnow to hire his preferred staff — Elias included — and enact his plan without interference.

Will Elias receive the same support in Baltimore? The early indications are promising. John and Louis Angelos — who have assumed club operations from their father, Peter —said all the right things during last week’s press conference, emphasizing that they’ll give Elias free reign to make all baseball decisions. Peter Angelos, by contrast, long carried a reputation as a meddling owner who often obstructed or vetoed decisions made by his baseball people.

However, the sins of the father sometimes fall upon the sons, even if it’s not deserved. As long as John and Louis have the last name Angelos, some Orioles fans may remain skeptical about whether they’ll truly stay in their lane and let Elias operate without complications. So far, at least, they’re off to a great start.

Overall, the Orioles face many of the same obstacles in 2018 that the Astros did in 2011 — and, in fact, might be a little worse off. Still, Elias was part of the front office team that helped the Astros rebuild from scratch and reach the height of baseball glory six years later. Few people are better prepared to handle the challenges that the Orioles must overcome.