John and Louis Angelos demonstrate their way of running the Orioles - BaltimoreBaseball.com 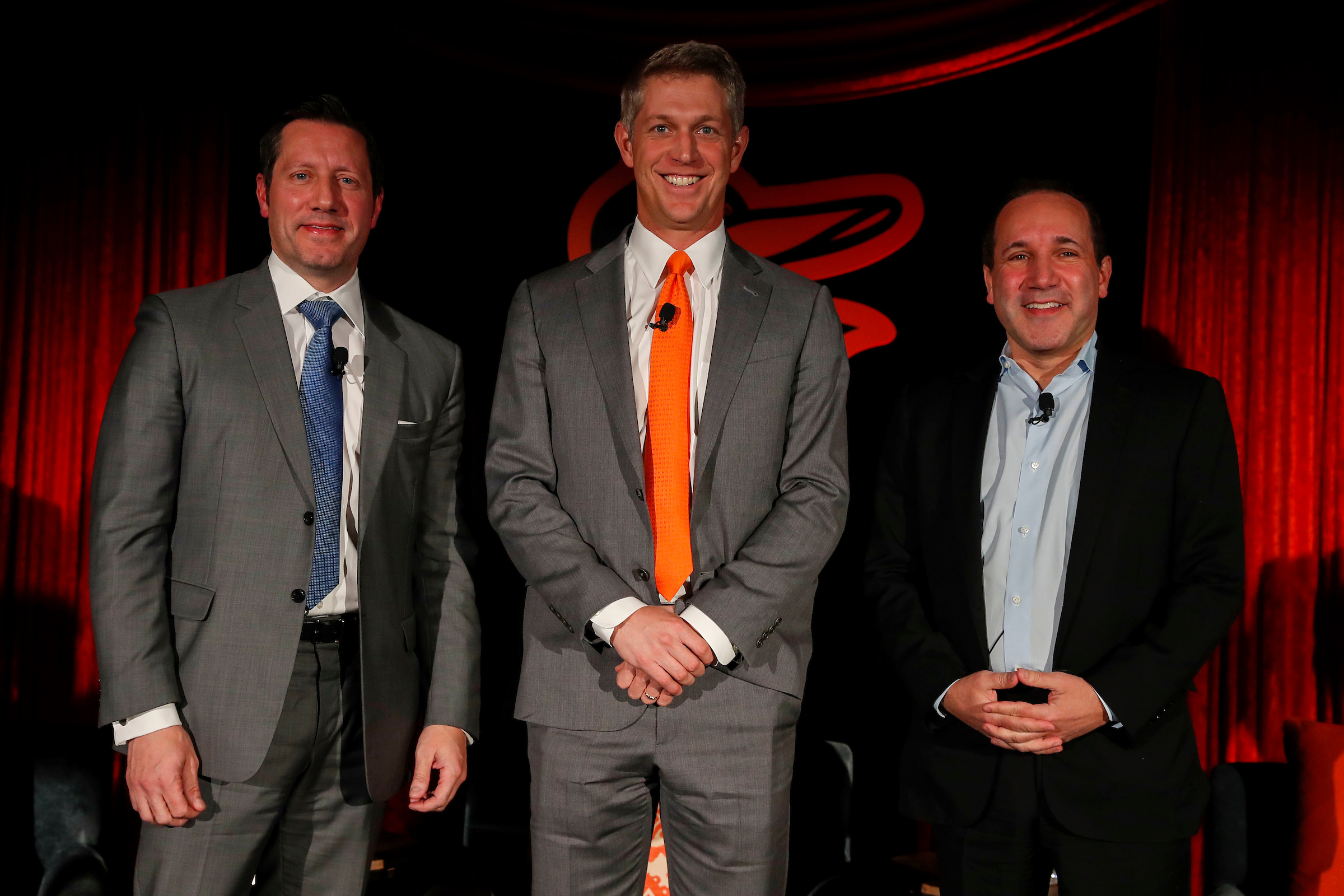 Monday’s introduction of Mike Elias as the Orioles’ new executive vice president and general manager was an opportunity to learn how the team’s new head of baseball operations will construct an organization. Perhaps more fascinating, it was a chance to see how John and Louis Angelos will run that organization.

When their father, owner Peter Angelos, was able to attend important team events, he declined, preferring to work behind the scenes. In recent months, that’s been the brothers’ modus operandi, too.

But Monday was a rare opportunity to hear them present their vision and answer questions about the process that led them to Elias and how they’re dealing with key issues for the franchise.

No, they’re not selling the team. That message was clear. Last month marked the 25th anniversary of this ownership group.

“We have a lot of staying power for the long haul,” John Angelos said. “No major changes. I’m looking forward to the next 25 years.”

John Angelos, whose title is executive vice president, is more outgoing than Louis, who is the ownership representative, and when questions were addressed to the brothers, John deftly answered most of them.

At last week’s owners meetings in Atlanta, an arbitration panel of three owners heard arguments in the MASN case. The Nationals believe that they deserve more money in television rights, and the Orioles believe that the contract signed when the Montreal Expos moved to Washington for the 2005 season should remain in effect.

John Angelos said that if an adjustment in the deal is made, it won’t affect how the Orioles’ on-field business is conducted.

“I don’t imagine it will have any impact on any of the things we’re talking about today,” Angelos said.

“The focus of ownership’s resources in the recent past in an effort to win, and in this most recent five- or six-year period, was very much on investing, perhaps over-investing in the major league player payroll, relatively. Mike has all the same resources today that we’ve had for baseball ops in the past, and he’ll have in the future to do with them as he sees fit.

“It’ll be the same commitment irrespective of that particular matter. That matter will come and it will go and when it goes, all those things will still be in place at Mike’s disposal … All the resources will be there to allow the general manager to effectuate any strategy he puts together.”

After the dismissal of executive vice president Dan Duquette on Oct. 3, the Angelos brothers conducted a lengthy search that led them to Elias.

“We had the benefit of meeting with so many qualified candidates,” Louis Angelos said. “He made an amazing first impression.”

Initial fan reaction to Elias’ appointment has been positive as the Angelos brothers predicted it would be.

During the 40-minute introduction, John, who was the brainchild behind this past season’s “Kids Cheer Free” ticket giveaway, reiterated his mantra of community involvement.

“All the professional teams around the country are important,” he said. “It certainly is about raising trophies and winning divisions and winning games. It’s also about a bigger picture … We start with the idea that the Orioles are a public trust and the goal of this ownership group of local Marylanders is to do right by the franchise in all respects.”

Elias will be the man making the decisions. When controversial questions directed to John and Louis Angelos were raised about the future of Brady Anderson and Chris Davis’ sagging performance, they directed them to Elias.

It’s clearly a new age for the Orioles. Having the Angelos brothers lead the introduction in the center of the team’s clubhouse, sitting in armchairs instead of behind a podium, symbolized that they’re not going to run the ballclub as their father did.

Peter Angelos, whose health has been in decline, hadn’t publicly addressed the media since August 2014 when he commented on the selection of Rob Manfred as commissioner at the owners meetings at the Hyatt Regency in Baltimore.

John was clearly comfortable in handling questions, and he was asked if he and his brother would be more visible and accessible in the future than they were during this transitional year, a question that drew some laughter.

“I characterize this forum as transparent,” he said. “I look at this as a conversation that we’re all having. Obviously, it’s occasioned by the very exciting happening of bringing in Mike to be the new GM of the O’s. That’s a great reason to sit down and have a conversation, but does that mean we’ll be more available? We live here. We grew up here. We spent our whole lives here. We’re not going anywhere, so we’ll be available, yes.”