Explaining my AL MVP ballot: Why I had Betts first, Britton ninth - BaltimoreBaseball.com

With the MVPs announced Thursday night, I figured I should explain, in detail, why I voted the way I did for American League MVP.

Because I selected Boston’s Mookie Betts, who came in second, over the Los Angeles Angels’ Mike Trout, who won the award for the second time in three years.

I admit my transgressions. And I will proceed to the firing line. Blindfold, please.

Before I explain my thoughts, I want to stress something about the writers who vote for BBWAA awards (MVP, Cy Young, Rookie of the Year and Manager of the Year). 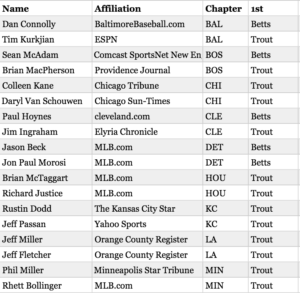 As a group, we take it very seriously. We solicit opinions. We pore over statistics. We talk to other voters. And then we make the call ourselves. Sometimes we get it right; sometimes we don’t. But very few writers take the responsibility lightly. Trust me on that.

I probably talked to 10 big-league players and staff members to get their thoughts on this year’s vote. I also spoke with several other writers and a few of my stat-head cronies, who made an impassioned plea as to why the only right answer in the AL MVP debate was Trout.

The players I talked to, almost to a man, leaned toward Betts, because he had a tremendous year and because, yes, his team won the ridiculously competitive AL East while Trout’s Angels lost 88 games and finished in fourth place in the AL West, 21 games out of first place.

It’s not Trout’s fault, of course, that his team stinks. And if Betts didn’t have such a monster season, I would have selected Trout as my No. 1. But, to me, this race was close enough for the word “valuable” to enter the equation. And Betts’ all-around success contributed significantly to the value of a division champion. The ballot leaves the qualifications up to interpretation. This is my interpretation: