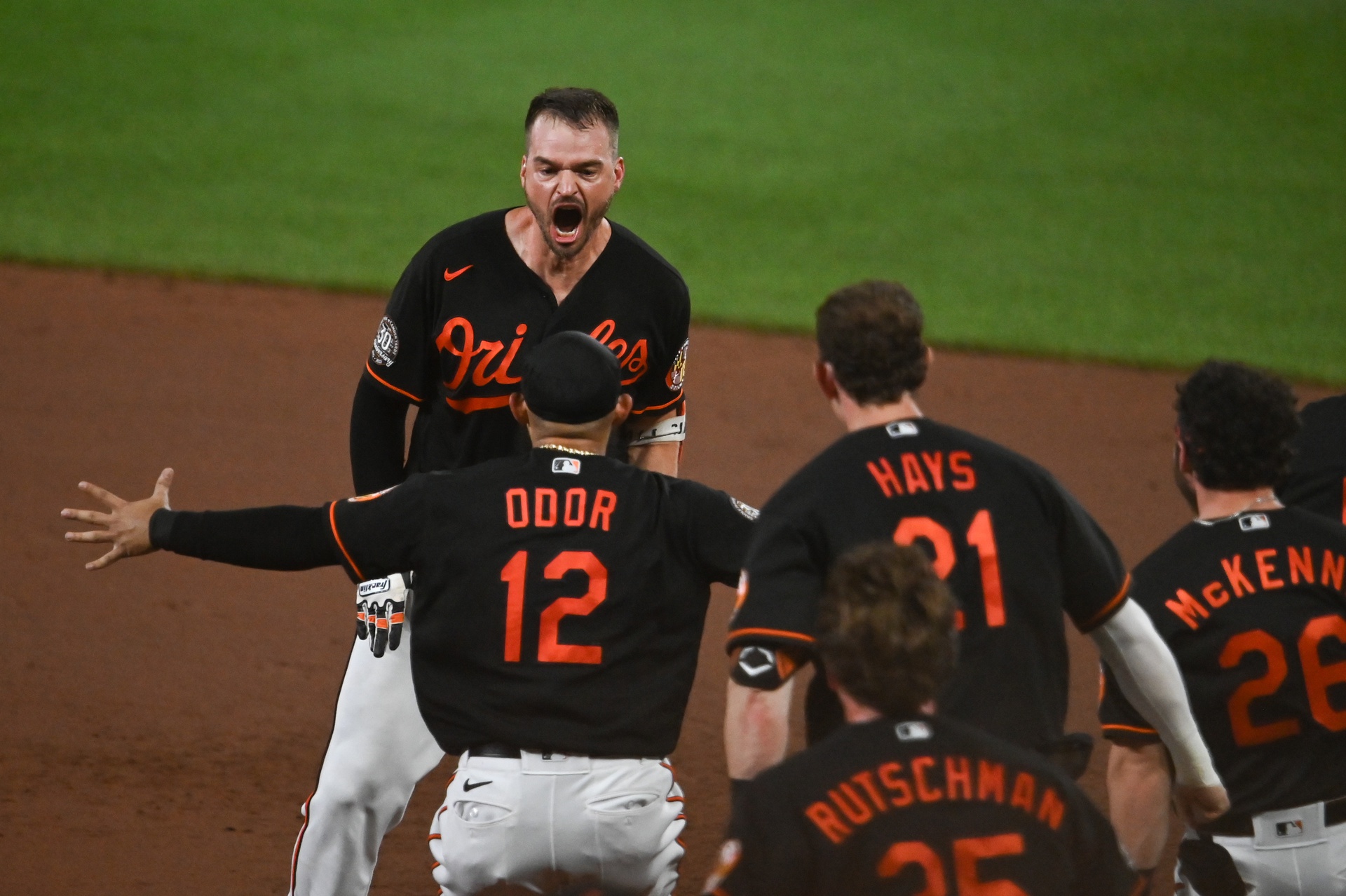 BALTIMORE—On a night when the Orioles drew their largest crowd since Opening Day, they brought back memories of the good old days at Camden Yards.

Trailing 4-2 heading into the bottom of the ninth inning, the Orioles scored three runs and pulled out a captivating 5-4 win, their sixth straight, over the Los Angeles Angels before an announced crowd of 27,814 on Friday night.

With two outs in the bottom of the ninth, Rougned Odor singled off Raisel Iglesias (2-5) and stole second and third without the Angels (38-47) attempting to stop him.

Adley Rutschman doubled to score Odor, and Cedric Mullins singled to score Rutschman. Mullins took second on the throw home and third on a wild pitch by Iglesias before Trey Mancini singled to left for the game-winner.

Each of the four two-out hits came with two strikes.

“It was so exciting, one of the best wins I’ve been a part of in my time here,” Mancini said. “It was great energy. The fans brought it all night, and we fed off that, especially late.”

Many of the fans came to the park for the popular Floppy Hat Night promotion, but they’ll remember the stirring comeback more.

“It was unbelievable to be a part of, and just such a great team win for us,” Mancini said.

The Orioles (41-44) not only have won six straight games for the first time since August 7th-13th, 2020, they became the fourth team in the last 20 seasons to win three straight games they trailed entering the ninth inning or later. Their other comebacks came against Texas on July 4th and 5th.

“We should have more ‘Floppy Hat Nights,’” manager Brandon Hyde joked. “That was an awesome, awesome crowd.”

Mike Trout gave Los Angeles a 3-0 lead with a three-run home run, his 24th, against Oriole starter Tyler Wells in the third. After the Orioles closed to 3-2, Shohei Ohtani homered against Dillon Tate (1-3) for a 4-2 lead in the top of the ninth.

“We were empty the first six innings of the game,” Hyde said. “Great at-bats the last few innings.”

José Quijada relieved Detmers in the seventh, and gave up a single to Austin Hays. Anthony Santander walked, and Ramón Urias singled to score Hays, sending Santander to third, where he stayed as Quijada struck out Tyler Nevin, Robinson Chirinos and Rutschman, who was pinch-hitting for shortstop Jorge Mateo.

The fans were chanting for Rutschman, who attempted to check his swing on a 2-2 count but was called out by first base umpire Lance Barksdale. Rutschman slammed his bat down on home plate in frustration.

In the bottom of the eighth, Mullins led off with a double against Ryan Tepera and advanced to third on Mancini’s liner to left. Ryan Mountcastle hit a single up the middle to score Mullins.

Mountcastle stole second, but Hays and Santander struck out to end the inning with the Orioles trailing 3-2.

Wells allowed three runs on six hits in four innings, walking two and striking out three, and was thrilled to see the team win on a night when he didn’t have his best stuff.

“It’s belief in your team,” Wells said. “They’ve picked me up multiple times this season. I’ve been on a good string of starts so far. Tonight wasn’t my sharpest, and it wasn’t my best. They picked me up whenever I needed it most.”

Bryan Baker, Keegan Akin and Beau Sulser combined for four scoreless innings until the ninth when Ohtani slammed his home run to center just beyond the reach of Mullins.

The Orioles are three games under .500 for the first time since April 23rd when they were 6-9.

Shortstop Jordan Westburg hit a three-run home run, his seventh. Tim Naughton (0-2) allowed three runs and recorded only one out.

Second baseman Luis Valdez drew a bases-loaded walk, his fourth walk of the game, in the 10th inning to give Single-A Delmarva an 8-7 win over Salem. Designated hitter Heston Kjerstad had three hits and is hitting .468.