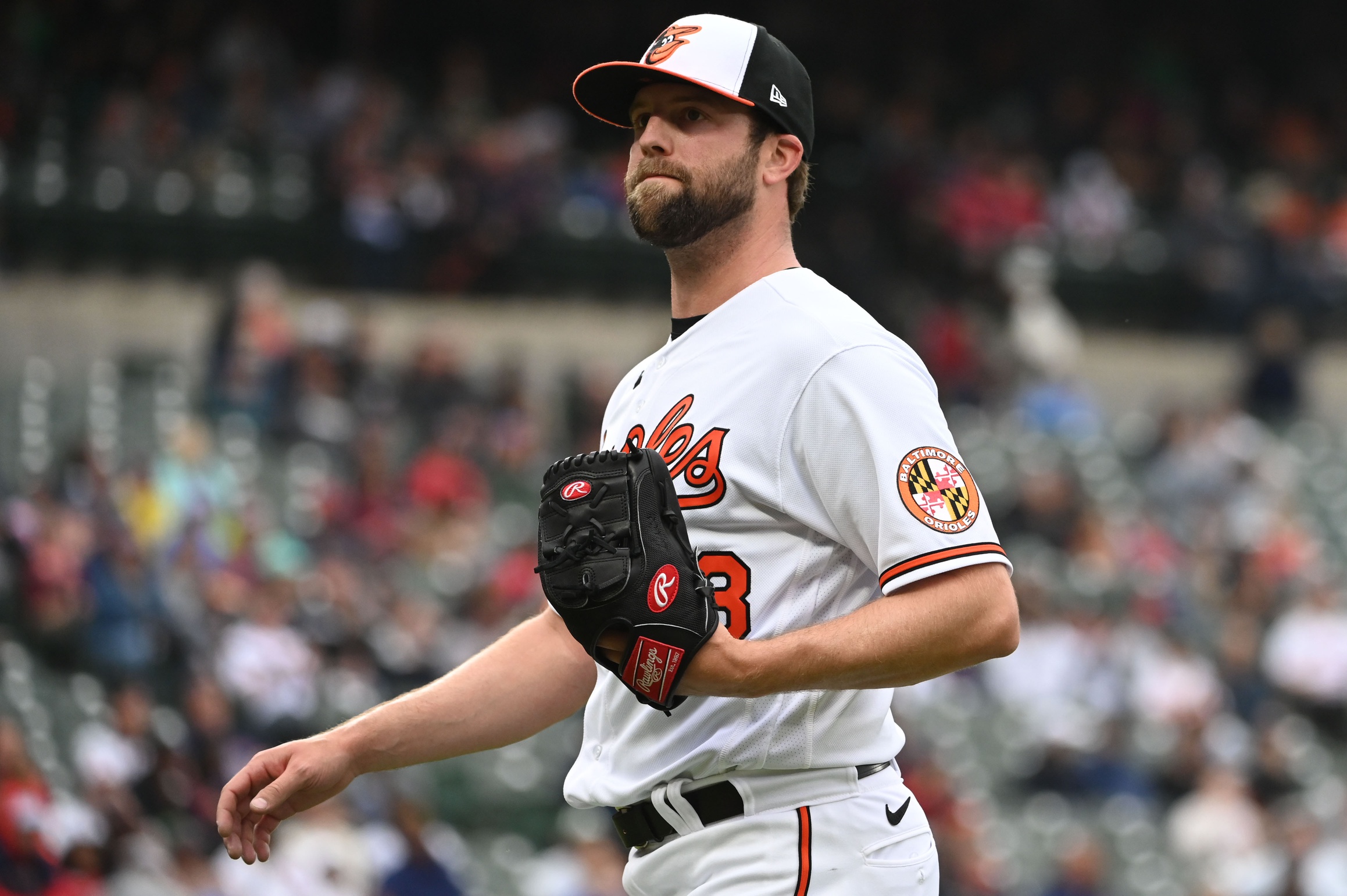 BALTIMORE—Oriole starter Jordan Lyles allowed eight Boston Red Sox batters to reach base in the first four innings. None scored. Lyles allowed a run in the fifth, but the Orioles scored three in the bottom of the fifth. After a spotless sixth, Lyles was out of the game, and the Orioles went on to a 9-5 win over the Red Sox before an announced crowd of 19,117 soaked fans at wet Camden Yards.

“I thought it was gutsy,” manager Brandon Hyde said of Lyles’ start. “He made pitches like a pro to get out of innings. We needed him to go deep in the game today, and he threw a lot of pitches early… He gave us what we needed.”

The Orioles have won two of three from the Red Sox, New York Yankees and the Los Angeles Angels. This week, they lost five straight, the final game at Los Angeles, three games at Yankee Stadium and the first game against Boston before an unlikely 2-1 win in 10 innings on Saturday night.

Half of the Orioles’ eight wins have come at home against the Yankees and Red Sox.

“That’s two really good teams with playoff expectations,” Hyde said. “It’s still really early in the year. We have a lot of games to play against those guys the rest of the year, but happy how we’ve played against them at home so far and, hopefully, we can continue.”

Red Sox starter Nick Pivetta (0-4) allowed one runner in the first three innings. Cedric Mullins led off with a single but was thrown out trying to steal.

In the fourth, Mullins reached on an error by first baseman Franchy Cordero, and moved to third on a single by Anthony Santander. Ryan Mountcastle flied to shallow right, with Mullins staying at third. Austin Hays struck out, and Santander, who was running on the pitch, failed to get into a rundown to allow Mullins to score and was tagged out to end the inning.

In the fifth, the Orioles scored three runs. Rougned Odor led off with a single, Ramón Urías doubled, and both scored on Tyler Nevin’s single, his first hit this season. With one out, Jorge Mateo and Mullins singled to load the bases.

Santander hit a long fly ball to left that would have been a grand slam before the left-field wall was moved back nearly 30 feet this season. Instead, he had a sacrifice fly as Nevin scored.

Odor hit his first home run with the Orioles to start the sixth, giving them a 4-1 lead. Urías walked, and a two-hour, five-minute rain delay began.

Mateo had a two-run double, Santander a two-run single and Mountcastle an RBI single. The six runs were the biggest inning of the season for the Orioles, who had a season-high in runs.

Nevin, who was recalled before Friday’s game, can play first and third base as well as left and right field.

“At the plate, I’ve been feeling pretty good, ever since I came up,” Nevin said. “I love the fact that I can play anywhere on the field, the corners. It’s a plus for me to give those guys confidence to be able to put me in any corner I need to play.”

Boston had two runners on against Lyles in the first and second, and loaded the bases against him in the third, but Jackie Bradley Jr. hit a grounder to first on which Nevin made a diving stop and then threw to Lyles for the out.

In the fourth, a double play started by Mateo at shortstop helped him out, and then Boston finally scored in the fifth. Xander Bogaerts doubled to start the inning. He moved to third on a grounder by J.D. Martinez and scored on a sacrifice fly by Cordero.

Lyles finished his start, his longest as an Oriole, with that 1-2-3 sixth.

Martinez hit a grand slam in the ninth against Travis Lakins.

Notes: Outfielder Ryan McKenna was optioned to Triple-A Norfolk. The Orioles need to cut another player by Monday because rosters are being cut from 28 to 26. … Left-handed pitcher Alexander Wells has a grade 1 ulnar collateral ligament elbow strain, and he’ll be out eight-to-12 weeks, Hyde said. He won’t need surgery. Wells is on the 10-day injured list. … Right-hander Chris Ellis, who’s on the 10-day injured list because of inflammation of the right shoulder, is still getting tests.

Trey Mancini missed a second game because of sore ribs after crashing into the right-field wall after making a catch on Friday night. … The Orioles open a four-game series against Minnesota on Monday night. Tyler Wells (0-2, 5.54) will face Chris Paddack (0-2, 3.68.). On Tuesday, Bruce Zimmermann (1-1, 0.93) will face Joe Ryan (3-1, 1.17). Wednesday’s matchup will feature Kyle Bradish (0-1, 3.00) against  former Oriole Dylan Bundy (3-1, 2.95). Bradish was one of four pitchers acquired for Bundy in December, 2019. Spenser Watkins (0-0, 2.55) is scheduled to start on Thursday. Minnesota hasn’t named its starter. … Minor league infielder Shed Long, who has yet to play because of a leg injury, soon will begin playing in games. … Rain has delayed Oriole games by three hours, 29 minutes this season.

Rutschman, who has been held back because of sore right triceps muscle, was 6-for-14 in five games for the IronBirds. Hall pitched four shutout innings on Friday night, allowing two hits and striking out six without walking a batter.

Aberdeen’s game against Jersey Shore was suspended after three innings because of rain, with the IronBirds leading, 2-1. The game will be completed on June 14th. Rutschman struck out and hit a sacrifice fly.