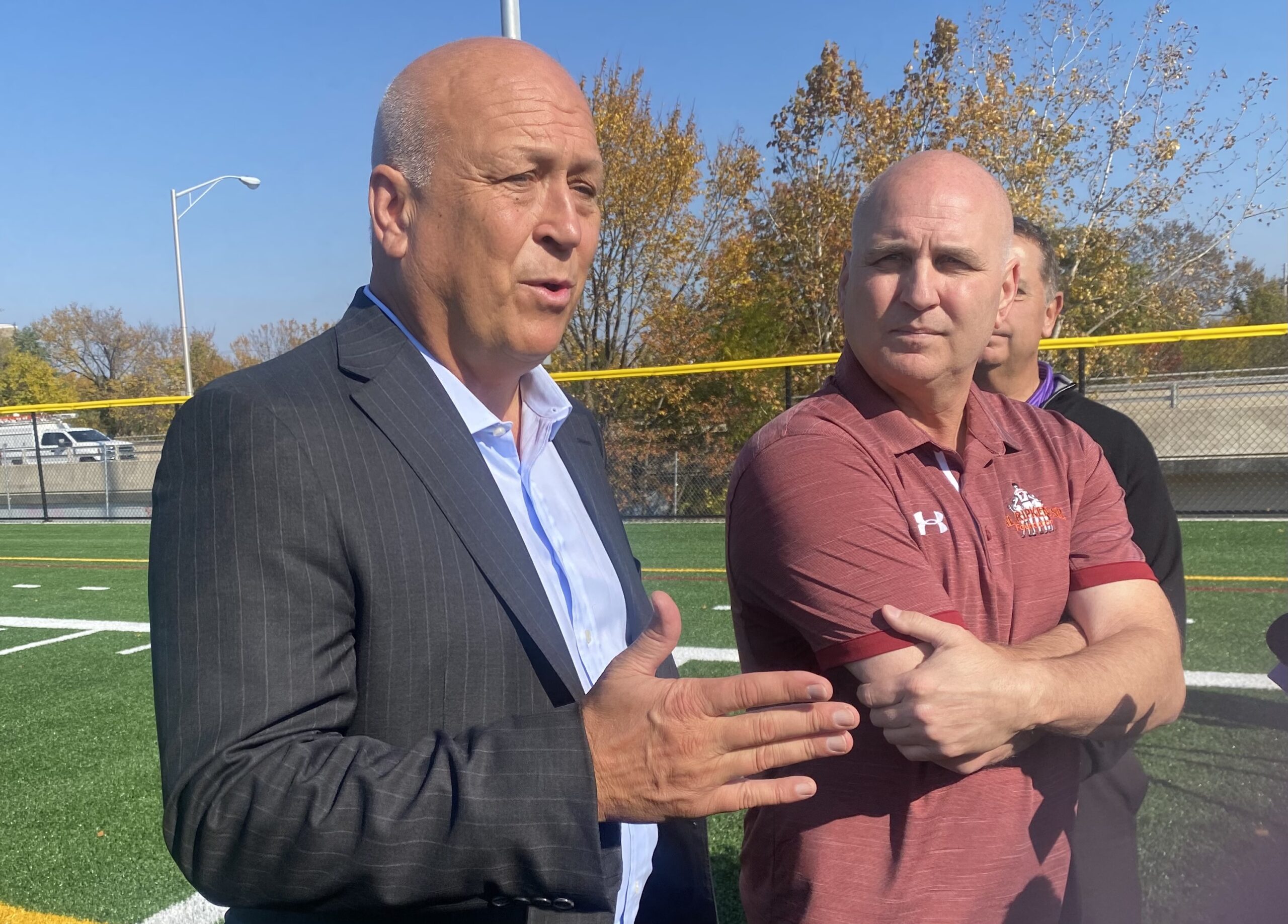 BALTIMORE–Twenty years after he concluded his Hall of Fame career with the Orioles, Cal Ripken Jr. is still setting records. On Wednesday, Ripken and his brother Bill participated in a ribbon cutting for the 100th sports facility developed by the Cal Ripken Sr. Foundation.

The newest youth development park, BGE Field at Reedbird Park, located in Baltimore’s Cherry Hill neighborhood near Harbor Hospital, is a $3 million complex that includes a football and soccer field that can also be used for baseball, softball and lacrosse.

The Middle Branch Fitness and Wellness Center, which will have three pools and multiple fitness rooms, is still under construction next to the field and will open next year.

The Ripkens were joined by Baltimore Mayor Brandon Scott, corporate executives from Baltimore Gas & Electric, Horseshoe Casino and Under Armour.

“Everything is measured and analyzed, especially in our game, baseball, sometimes too much,” Ripken said. “But certain numbers are worth celebrating. The 100th field. We didn’t set out to build fields at the very beginning of the foundation when we got involved in it because we saw a need that kids have safe places outside to attend our programs, so we started building fields.”

The first field was built on the site of Memorial Stadium on 33rd Street in 2009, and the new facility is meant to help at-risk youth. The Ripkens didn’t play in facilities as well equipped when they were growing up and traveling with their father, longtime Orioles minor league manager Cal Sr., who became a respected Orioles coach and later was the first to manage two sons in the majors.

“It’s like Christmas when you get a present,” Ripken said. “We played in all kinds of fields, minor league stadiums where we rolled up paper cups, which I thought was good for our creativity, but we longed to play on a field like this. When you feel like a big leaguer, you put more time in, put more practice in, and it’s a safe place. That’s the most important thing, to have kids play in a safe place. We also have a for-profit business where we try to make kids feel like big leaguers and enjoy the result. You’re automatically a big leaguer, I think, when you step on this field.”

In his remarks to corporate donors and community leaders, Ripken said he wished his parents, Cal Sr., who died in 1999 at age 63, and his mother, Vi, who passed away in February at age 82, could have seen the results of the family’s work. There are Ripken facilities in 26 states and the District of Columbia.

“We lost dad way too early, and we tried to capture the legacy of dad, and dad’s legacy really was in helping kids,” Ripken said. “He used baseball to help kids. We simply started a foundation to help kids through baseball.

“It’s really emotional for me because we lost dad and mom was a really big factor in founding and contributing to the Cal Ripken Sr. community. In many ways, they kept us humble … They would be super, super proud to be here today to celebrate this big milestone.”

The new field is about three miles from Oriole Park. Ripken has no formal role with the Orioles.

“We made choices after we retired,” Ripken said. “My kids were 8 and 12 at the time, and I wanted to actually be available to them. I’ve used the good name that dad gave us to try to do good things with it. We’ve both tried to watch ourselves over the years. We’re perfectly comfortable moving in that direction, and I’ve gotten really comfortable, period. Our foundation has grown. It has an excellent board. It feels like it’s right. It feels like we’re having success, and we’re going to keep pushing the model.”

NOTES: The Orioles agreed to terms with right-handed pitcher Rico Garcia on a minor league contract, pending a physical. Garcia was 1-2 with a 7.31 ERA in 14 games with Colorado and San Francisco in 2019 and 2020. Garcia had Tommy John surgery in March and missed the 2021 season. News of the agreement was first reported by Orioles broadcaster Melanie Newman and confirmed by an industry source. … Left-handed pitcher Nick Vespi will play in the Arizona Fall League’s Fall Stars Game on Saturday. Vespi is 3-1 with a 2.19 ERA in eight games for Mesa. … First baseman Ryan Mountcastle and centerfielder Cedric Mullins were nominated for the All-MLB Team.