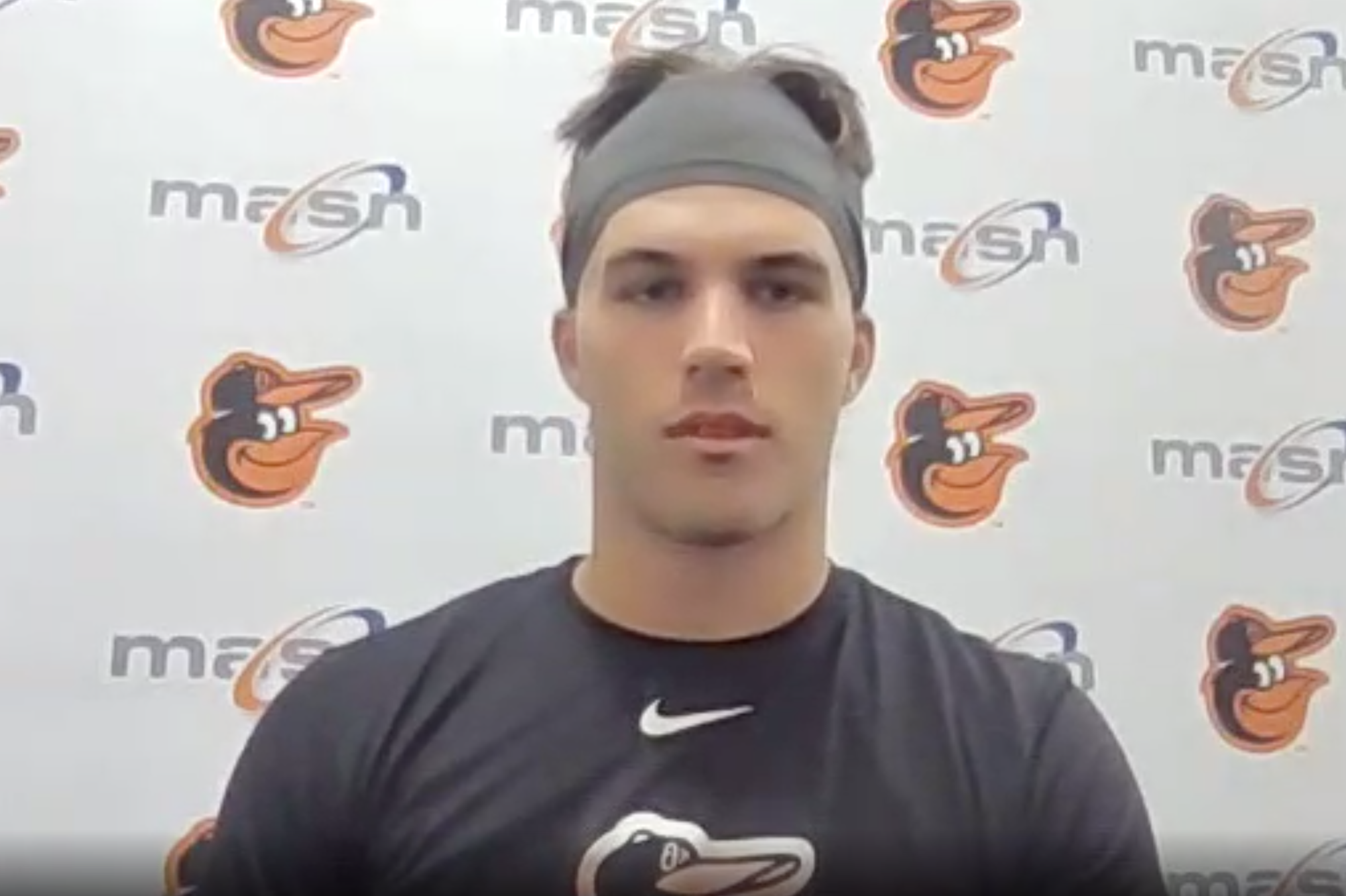 The Orioles have a number of their top prospects at their fall Instructional League camp in Sarasota, Florida. They closed the camp to the media, but on Friday they made several available for a Zoom session.

Carter Baumler, who was drafted in the fifth and final round in 2020, was an Iowa high school pitcher who underwent Tommy John surgery last season. The 19-year-old right-hander thinks he’ll be ready to pitch in spring training, though he’s yet to throw to hitters.

“I finished my whole throwing program, and I’m cleared to have a pretty normal offseason,” Baumler said. “I’m pretty much a full-go getting ready for 2022.”

In the three drafts since Mike Elias arrived as general manager, Baumler is the only pitcher chosen in the first five rounds.

“I’d like to think that I’m a pretty mentally tough person,” he said. “It has been a little tough at times. The TJ rehab process is tough for anybody, and it’s something you definitely can’t prepare for. The biggest part about it is just being patient. That’s what I’ve tried to do. It’s been good for me, and I’ve learned a ton through the whole process.”

Westburg’s move up: Shortstop Jordan Westburg, who was the 30th overall pick in the first round, moved up during the 2021 season. In his first season in professional ball, Westburg was promoted twice after hitting .366 with 3 home runs and 24 RBIs at Low-A Delmarva with a 1.075 OPS in 20 games.

Westburg played both shortstop (69 games) and third base (36) and was a designated hitter seven times. Westburg isn’t sure how far away he is from the major leagues.

“I can’t really tell,” he said. “I’m not really focused on that. I know that I’ll probably start off at Double-A again … Right now, we’re in the offseason so there’s no games to focus on. I’m trying to improve every facet of my game, so that come spring training, I can put myself in a good position to move up quickly again and, hopefully, make an impact at the big league level whenever I can.”

Henderson’s also on the rise: Gunnar Henderson, who was the Orioles’ second-round draft pick in 2019, joined Westburg at three levels in 2021.

Like Westburg, he played shortstop (62 games) and third (35), and was the DH in nine games.

Unlike Westburg, it was Henderson’s second season of professional ball. He played 29 games in the Gulf Coast League after he was drafted in 2019.

“I felt like it was a great year for development,” Henderson said. “Going through high school and in the first year of the GCL, I didn’t really have that long struggle period, and I felt like going through that struggle period really helped my development because I was able to learn how to go through it and learn how to handle it a little bit better and also get through it a little quicker for the next time.”

Mayo’s development: Coby Mayo, the Orioles’ fourth-round selection in the 2020 draft, had a solid first season in professional ball. In 53 games with the Orioles’ two Florida Complex League teams and Delmarva, Mayo hit .319 with 9 home runs and 41 RBIs and a .981 OPS.

The 19-year-old third baseman said this past season really helped him.

“After a full year of pro ball, I think I’m just more experienced and more comfortable in the playing atmosphere,” Mayo said. “I think my whole game has taken a step forward and I think that will continue every year … the more I see pitches.”

Mayo said his biggest surprise was “once I got going, how fast I was able to turn on and really just have fun. The first few weeks of the season I struggled a little bit because coming off a little bit of an injury, not seeing live at-bats for a few months, but once I got a little more comfortable in the box, I felt like everything came pretty easily to me. I didn’t think that would happen.”

Cowser’s first pro season: Colton Cowser, the Orioles’ first-round pick in 2021 and the fifth overall selection, had a strong first pro season. After seven games in the Florida Complex League, where he hit .500 (11-for-22),  Cowser played 25 games for Delmarva and hit .347 with a home run, 26 RBIs and a .904 OPS.

The 21-year-old outfielder has had an eventful first year with the Orioles.

“It’s been pretty crazy whenever I sit down and actually think about it,” Cowser said. “I hadn’t really had the chance to do that until the three- or four-week period we had off before I came up to camp.”

Call for questions: I’ll be answering Oriole questions this week. Please leave them in the comments below or email them to: [email protected]