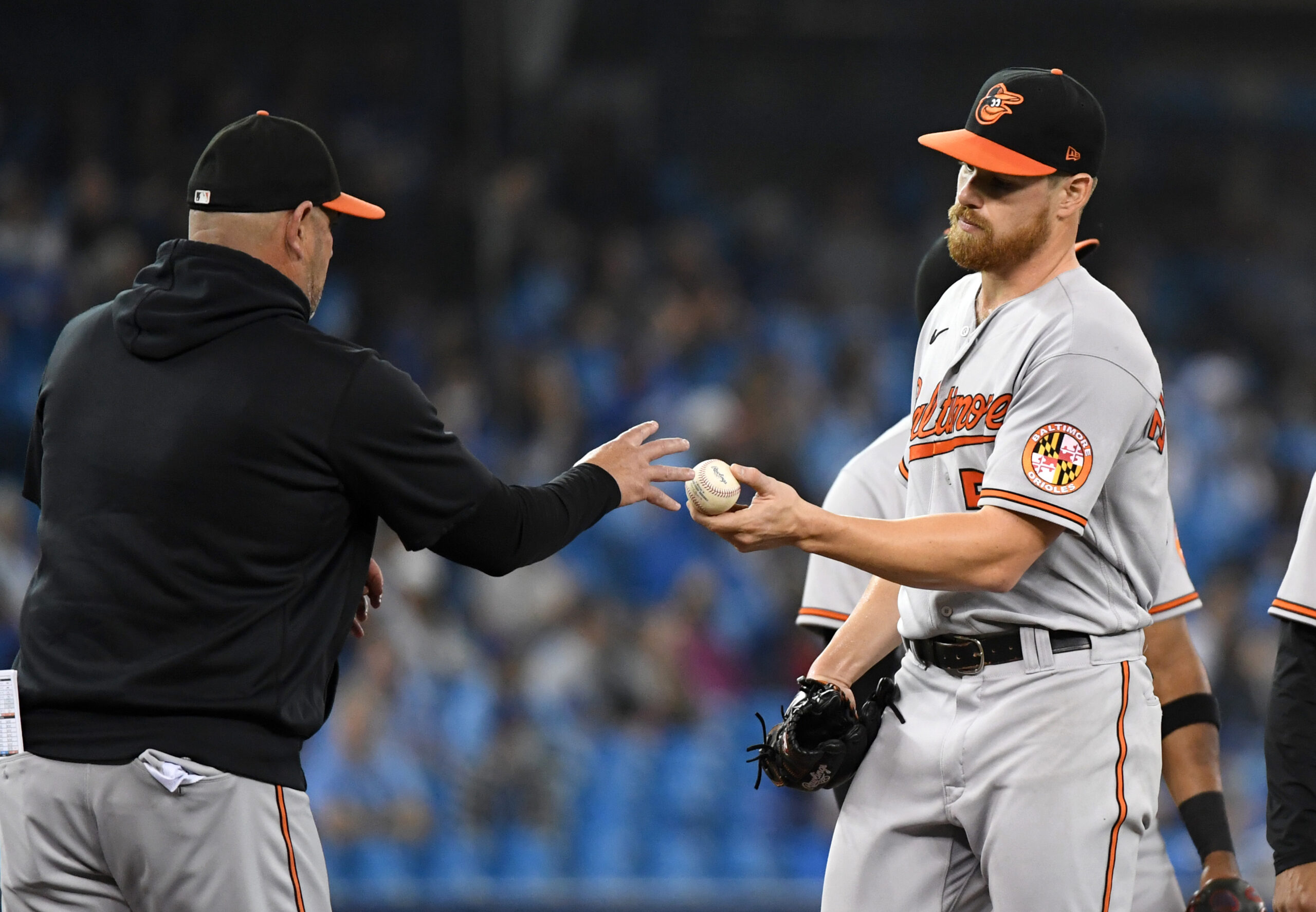 In a season they’d like to forget, the Orioles played another forgettable game in their 2021 finale.

The Toronto Blue Jays pounded the Orioles, 12-4, at Rogers Centre, sweeping the three-game series and beating the Orioles in 14 of 19 games. In six of the 14 losses, the Orioles allowed at least 10 runs to the Blue Jays.

Toronto (91-71) finished a game behind the Boston Red Sox and New York Yankees, who both won on Sunday and will face each other at Fenway Park on Tuesday in the American League wild-card game.

In 2019, the first season under executive vice president/general manager Mike Elias and manager Brandon Hyde, the Orioles were 54-108. Only 60 games were played in 2020 because of Covid-19, and the Orioles were 25-35.

This season, the Orioles used 62 players, a franchise record, and Hyde’s team played six games in the final week that were crucial to the Red Sox and Blue Jays. They won two of three from the Red Sox, staged a late rally on Friday night in a 6-4 loss and were pounded in the final two games.

“I’m hoping that our guys get something out of playing and seeing what playoff teams look like and playing down the stretch and trying to get there,” Hyde said.

“We didn’t pitch very well this series. We had a tough time with their lineup all year long. It’s a tough lineup to pitch against. I hope that our guys got something out of playing in this environment and playing games that mattered.”

Bruce Zimmermann, who returned from the 60-day injured list on Tuesday, throwing four innings and allowing a run on two hits against Boston, allowed three runs on five hits while recording just two outs before Marcos Diplán replaced him in the first.

“I knew it was going to be a tall order,” Zimmermann said. “This team is playing for their life … They were on me right from the beginning.”

Zimmermann allowed a leadoff home run to George Springer, his 21st, and RBI singles to Teoscar Hernández and Santiago Espinal before pulling pulled.

“I’m trying to win the game and Zimm is getting hit around in the first inning,” Hyde said. “I didn’t want to pull him early, but three runs given up, traffic on the bases, I was trying to keep it right there.”

Vladimir Guerrero Jr. hit a two-run home run, his 48th, against Diplán in the second. Springer hit a grand slam off Hanhold in the third for a 9-1 lead.

The Orioles scored their second run in the fifth when Richie Martin scored on a ground ball by Ryan Mountcastle.

Krehbiel allowed three runs in two innings, including Marcus Semien’s 45th home run. Semien set a record for most home runs by a second baseman this season, surpassing the 43 former Oriole player and manager Davey Johnson hit with the Atlanta Braves in 1973.

Pedro Severino’s sacrifice fly in the seventh, and Austin Hays’ RBI single in the eighth made the score 12-4. The Orioles outhit Toronto, 13-12.

“I’m happy with how we swung the bats,” Hyde said. “We didn’t pitch early in the game. We pitched well in the sixth, seventh and eighth, but a little too late at that point. This is a really good lineup. They’re breaking records offensively, and you have to be able to hit your spots and not miss in the middle and pitch to the edges and have swing-and-miss stuff. We just had a tough time with that all series.”

A year after having colon cancer surgery and undergoing chemotherapy, Trey Mancini played in 147 games and hit .255 with a .758 OPS.

“Obviously our record isn’t where it needs to be,” Mancini said. “We’ve got a long way to go, but a lot of good things happened this year, and a lot of guys made names for themselves.

“We’ve got a core group forming in the lineup … and that’s really big. Having a little bit of continuity there, and especially as the season got on, we really jelled together. It was just a really fun group to be around. I’m looking forward to being back with all these guys next year.”

Notes: The Orioles and Arizona Diamondbacks finished tied for the worst record in baseball, but the Orioles will get the No. 1 pick in 2022 because they lost more games in 2019 after both went 25-35 in 2020 … Triple-A Norfolk ended its season with a 3-2 win over Durham. Rightfielder Kyle Stowers had two hits. Catcher Brett Cumberland hit his 10th home run. Adley Rutschman, who played first base, was 1-for-3 and ended his season with a .312 average and .896 OPS.

He finished the season with one hit in his final 17 times at-bat. Mullins played 159 of the 162 games despite a sore hamstring late in the season

“He’s played a six-month season, and I think [Cleveland’s Myles] Straw is the only guy who’s played more games in center field, in a premium position, and he’s been incredible for six months,” Hyde said.

“I just think he’s not getting, maybe, the results haven’t been there the last couple weeks. I’m sure there’s some fatigue. The hammy was sore for a few days. I think it’s fine now. But he just played since the beginning of February almost every single day coming off a shortened season last year, and he’s allowed to be a little fatigued, if that’s what it is. But really proud of Cedric’s year and real excited about him going into next season.”

Call for questions: We’ll have our first offseason mailbag next week. Please put your questions in the comment box below or email them to: [email protected]