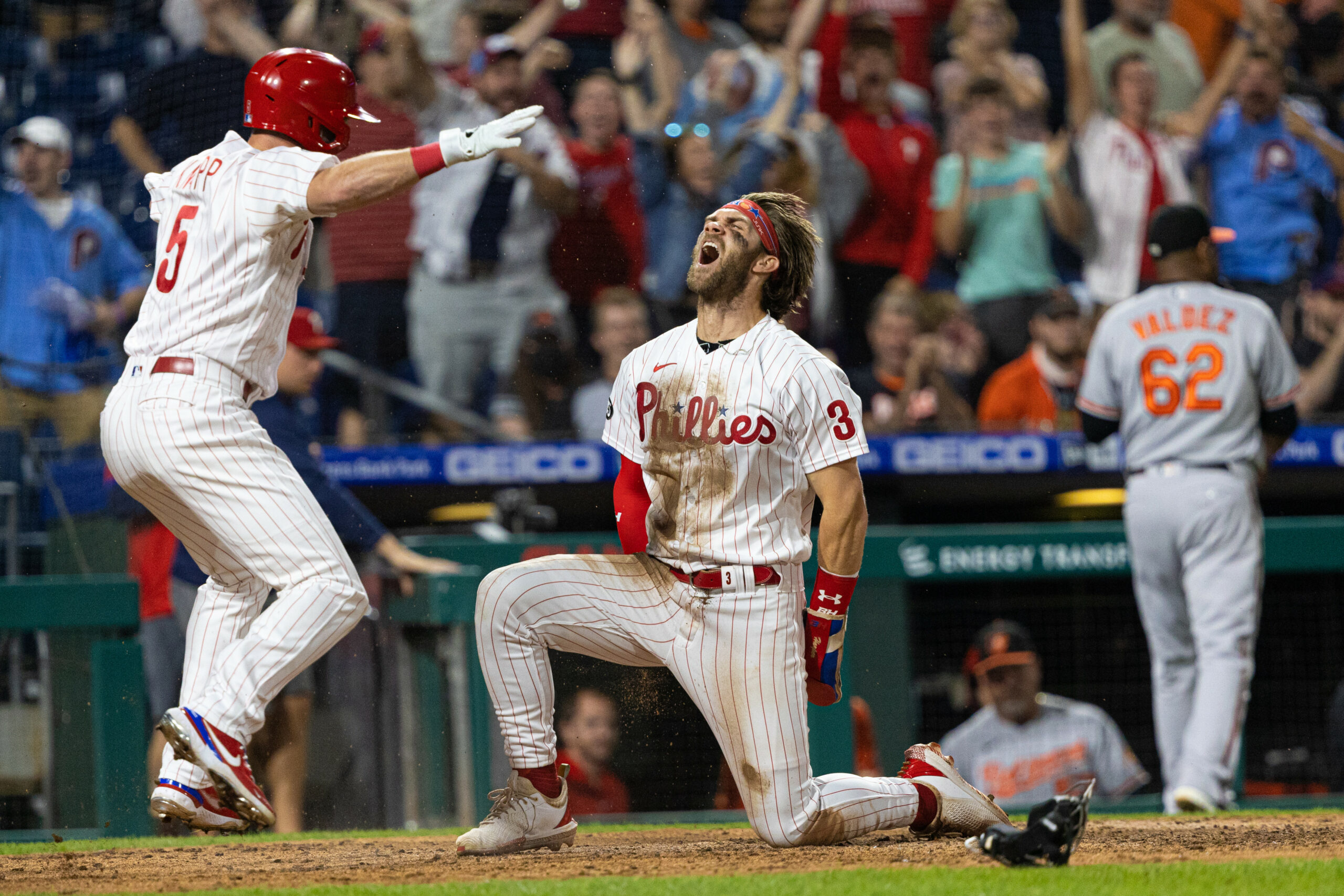 PHILADELPHIA—The Orioles were one out from dealing the Philadelphia Phillies a second consecutive loss. They led by a run with two outs in the bottom of the 10th and the automatic runner, Ronald Torreyes, was on third.

Manager Brandon Hyde decided to intentionally walk Bryce Harper. He then had a session on the mound with his eighth pitcher of the game, César Valdez. But the strategy backfired when J.T. Realmuto hit a triple to right field that was just out of the reach of a lunging Anthony Santander. Torreyes scored the tying run and the Harper scored the winning run with a headfirst slide in the Phillies’ 3-2 win over the Orioles before an announced crowd of 18,955 at Citizens Bank Park on Tuesday night.

“We were a couple of pitches away,” Hyde said. “I didn’t want Harper to beat us there. Realmuto is an All-Star, superstar-type player. I didn’t want him to beat us, as well. The pitches were too close to the plate to Realmuto with a pinch-hitter on deck.”

Valdez (2-2) had his contract purchased from Triple-A Norfolk before the game. Surprisingly, the pitcher who was the Orioles’ closer in the early weeks of the season was in line for his ninth save and his first since May 10th.

Tyler Wells pitched a perfect ninth and was in line for the win after Austin Hays drilled a double down the left-field line to score automatic runner Kelvin Gutiérrez for a 2-1 lead in the top of the 10th.

“It’s a tough loss tonight, but I think all the pitchers did very, very well,” Wells said.

Hyde said that Valdez and Brooks Kriske, a newly acquired pitcher who has yet to pitch for the Orioles, were his only choices to work the 10th. Both bullpens did well; the Orioles got only seven hits against five Phillies pitchers.

The Orioles (48-103) hadn’t won a game in which they scored two or fewer runs until Monday night when John Means led them to a 2-0 victory. They were on the verge of winning two straight with just two runs against a team fighting for a playoff berth.

Conner Greene got his first major league start and didn’t allow a run in the first inning and was pinch-hit for in the second by Ryan McKenna.

Medina nearly gave up Cedric Mullins’ 30th home run in the third. It was ruled foul on the field but replays showed that it might have grazed the foul pole. Mullins’ pursuit of being the first Oriole with 30 home runs and 30 stolen bases in a season continues.

“I just saw the replay from the JumboTron,” Hyde said. “Based on our video guys, they were hopeful that it maybe hit the back part of the pole, kind of how the ball was fading back fair, but we didn’t have a real good angle in our video room for that so we left it to New York to decide.”

Mullin doubled in his first at-bat. After the long foul, he beat out an infield single.

In the top of the fourth Medina hit Richie Martin with a pitch with two outs and walked Gutiérrez. Ramón Urías, who was a late scratch because of a nagging upper leg injury, singled to score Martin.

After 14 2/3 scoreless innings, the Phillies broke through in the sixth when  Realmuto doubled against Thomas Eshelman, and Andrew McCutchen doubled off Dillon Tate.

In the bottom of the eighth, Harper doubled and went to third on a ground ball to second by Realmuto. He tried to score on Matt Vierling’s grounder to second but was thrown out at the plate.

Note: Keegan Akin (2-10, 6.93 ERA) will face Zack Wheeler (14-9, 2.83) on Wednesday night. … Heston Kjerstad, the Arkansas outfielder whom the Orioles choose with the second pick in the 2020 draft, posted a video Tuesday of him hitting with the caption: “Finally back swinging the bat again!”  Kjerstad hasn’t been able to play for the Orioles because of myocarditis, inflammation of the heart. He has been working out in Sarasota.