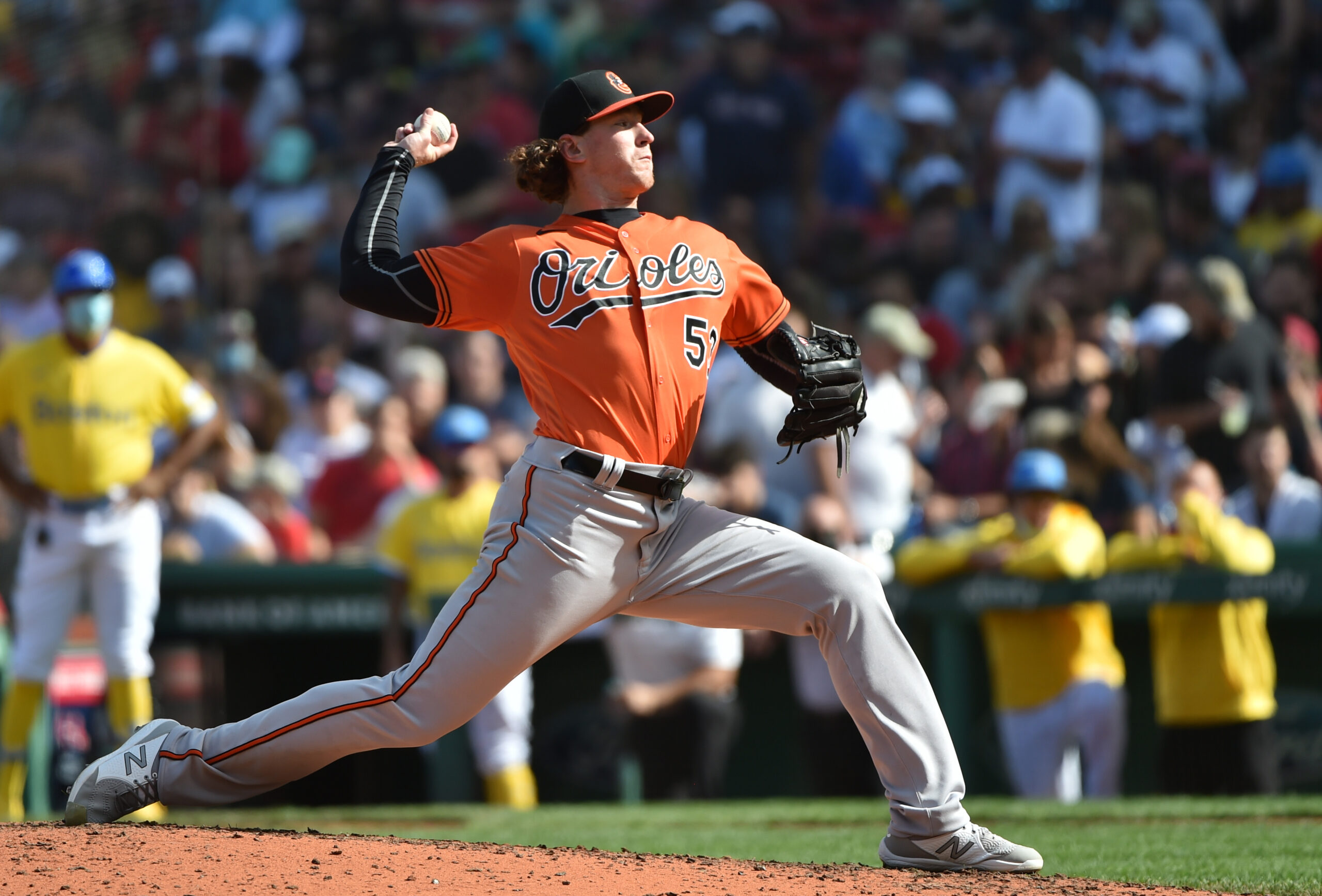 BOSTON—Mike Baumann, one of the Orioles’ best pitching prospects, had a rough afternoon at Fenway Park, giving up five runs in two innings of relief as the Boston Red Sox beat the Orioles, 9-3, before an announced crowd of 30,027 on Saturday.

The Orioles led, 2-0, after two pitches as Ryan Mountcastle followed a leadoff double by Cedric Mullins with his 30th home run, but the Orioles (47-101) lost for the seventh time in their last eight games and for the fifth straight time in Boston. Since sweeping the first three games of the season at Fenway Park, the Orioles are 1-11 against the Red Sox.

Mullins stole his 29th and 30th base in the second and is just one home run away from becoming the first Oriole to have 30 homers and 30 steals in a season. He and Mountcastle represent some of the Orioles’ promise for a brighter future.

Baumann is expected to be part of that promise among the young pitchers. His major league debut on September 7th went smoothly. He allowed an unearned run on two hits in 3 2/3 innings, picking up the win against Kansas City.

In Toronto’s 22-7 rout of the Orioles last Sunday, Baumann was tagged for six runs in three innings. In his third outing on Saturday, he allowed five runs on six hits in two innings. His ERA is 11.42.

“Even though Baumann gave up the runs today, I’m happy with his stuff. His fastball, throwing it 95, 96 today with a 90-mph slider, that’s going to play.”

After Mullins and Mountcastle jumped on Red Sox starter Nick Pivetta, Anthony Santander singled on the right-hander’s third pitch. Pivetta then walked Austin Hays but pitched out of the inning.

Oriole starter Zac Lowther couldn’t protect a 2-0 lead. He allowed three runs on five hits in the first with Kiké Hernández scoring on a single by Rafael Devers, and Devers and Xander Bogaerts coming home on a two-run double by Bobby Dalbec.

“You hope it’s a learning experience and a learning process for some of these young guys who are pitching in tough environments,” Hyde said. “Pitching against teams that are in a pennant race. Zac had it rough early in the game. I thought he settled down and got a little better in second and third inning.”

Austin Wynns hit his fourth homer in the top of the second for a 3-3 tie. Mullins, who has 29 home runs, singled after Wynns’ home run and stole second and third but didn’t score.

After Dalbec’s double, Lowther retired eight straight batters before walking Dalbec and Christian Vazquez and being replaced by Conner Greene, who recorded the final two outs in the fourth. Lowther allowed three runs on five hits in 3 1/3 innings, and his ERA is 9.61.

“Trying to roll with the punches,” Lowther said. “My stuff isn’t where I want it to be, really continuing to battle through some of the command issues I’m having but being able to go out there and throw against a team like the Red Sox, it’s tough, and you just have to take it head on. I have a lot of guys in my corner, and they’re giving me a lot of support, and that helps.”

Devers doubled against Baumann with one out in the fifth. Bogaerts singled to score Devers, and Boston (84-66) had a 4-3 lead after five.

In the sixth, Baumann (1-1) allowed a run-scoring double by Hunter Renfroe and a three-run homer by Bogaerts, his 22nd, to give Boston an 8-3 lead.

Kyle Schwarber scored on a double-play ball by Vazquez in the eighth to make it 9-3.

“It was a good game until the sixth,” Hyde said. “The guys they threw against us today have really, really good stuff.”

Notes: Trey Mancini, Pedro Severino and Ramón Urías did not play because of injuries. “We’ve got two weeks to go,” Hyde said. “They’re not going to clear up overnight. It’s going to be something that’s going to linger probably to the end of the year for all of those guys. We’re going to have to try to manage and give guys rest.” …Hyde said that he doesn’t have his starting pitchers penciled in for the rest of the season. He’ll go series-by-series, he said. No starts have been scheduled for Dean Kremer or Bruce Zimmermann.  Both have starts on Saturday night, Kremer for Triple-A Norfolk and Zimmermann for Double-A Bowie.  … Alexander Wells (1-3, 7.76 ERA) will face Nathan Eovaldi (10-8, 3.52) on Sunday.