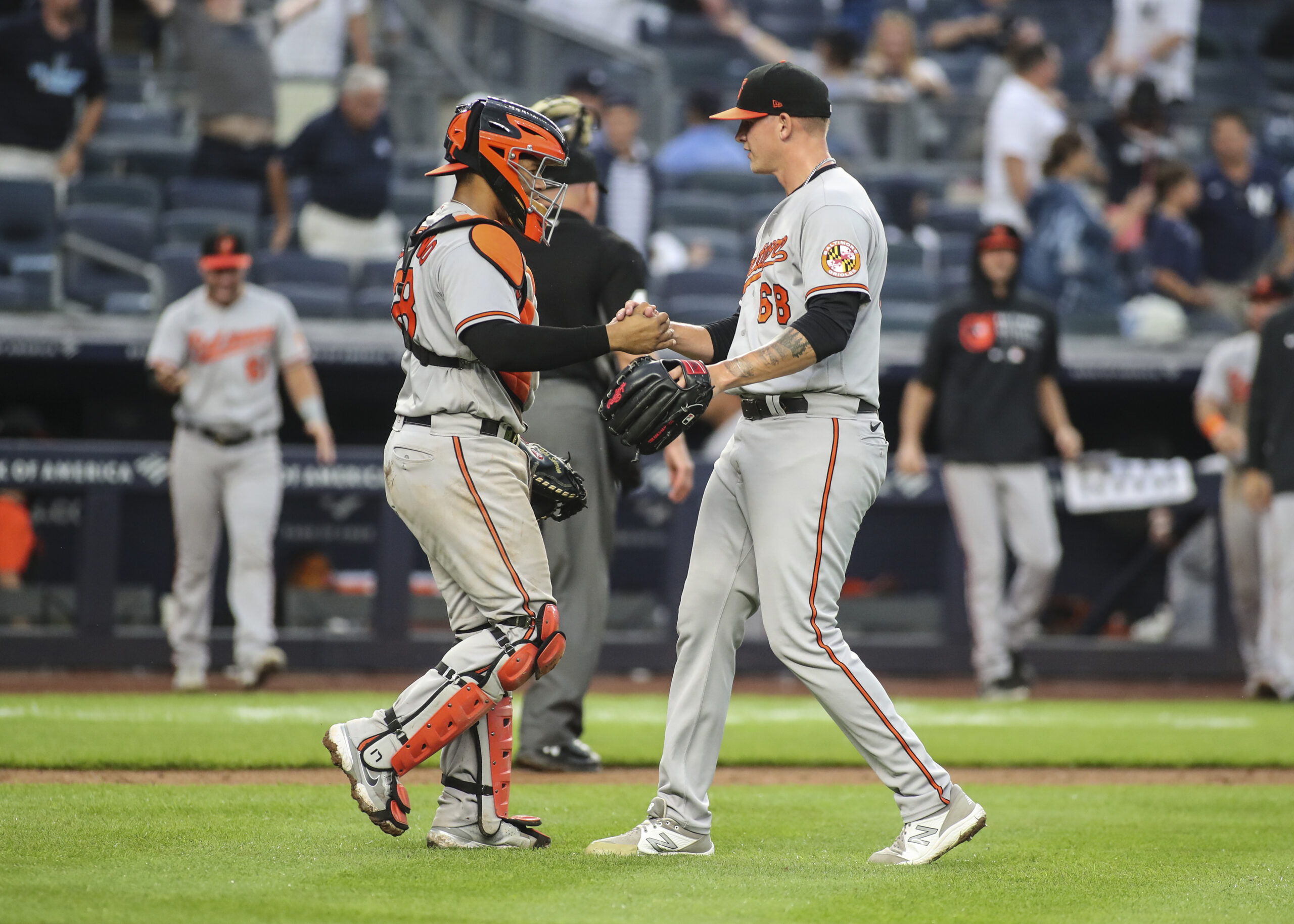 NEW YORK—In three taut games, each one decided by one run, the Orioles won their first road series since mid-July and their first in New York since March 2019.

A four-run seventh inning lifted the Orioles past the New York Yankees, 8-7, before an announced crowd of 33,091 at Yankee Stadium on Sunday.

Although the Yankees didn’t look impressive in their 4-3 win in 11 innings on Friday night or their 4-3 loss on Saturday, they did hold a lead on Sunday after six, and the Orioles were 7-75 when trailing after six innings.

“We crawled our way back there with some really good at-bats there in the sixth and the seventh inning,” manager Brandon Hyde said. “We did a lot of really good things in this series. We had a chance to win all three games.”

The Orioles trailed by three runs heading into the seventh. Andrew Heaney, who gave up four home runs to them on August 2nd in the 7-1 win that preceded the 19-game losing streak, had a nightmarish inning.

He hit Trey Mancini with a pitch to begin the inning. DJ Stewart and Austin Hays singled to load the bases. Jahmai Jones, who came into the game when Ramón Urias left because of upper leg soreness, doubled to score Mancini and Stewart.

Wandy Peralta relieved Heaney and Kelvin Gutiérrez blooped a single over shortstop to score Jones and give the Orioles an 8-7 lead.

Marcos Diplán (1-0), the fourth Oriole pitcher, got the win.

Tyler Wells retired Aaron Judge on a fly to right, Giancarlo Stanton on a popup to second, and Anthony Rizzo on the fly to left in the ninth for his first career save.

“Watching Tanner Scott and Tyler Wells pitch there at the end, that was a great job of pitching,” Hyde said. “Tanner almost went through the entire order after pitching yesterday. Tyler Wells with his first career save. I’ve been trying to get him a save opportunity for two months.”

After LeMahieu began the first with a single, Keegan Akin struck out Gallo, Judge and Stanton to end the inning.

In the second, Gary Sánchez hit a grand slam put the Yankees ahead, 4-1.

Hays hit his 15th home run to left against Corey Kluber in the second gave the Orioles a 1-0 lead.

In the first, Cedric Mullins drew a walk to begin the game. He stole his 26th base and moved to third on a wild throw by Sánchez. Kluber struck out Anthony Santander, Mancini and Stewart to end the inning.

Urias singled with one out in the fourth, moved to third on a double by Pedro Severino and scored on a fly ball to left by Mateo.

Kluber, who began the game with a 5-1 record and 3.05 ERA in nine previous starts against the Orioles, went 3 2/3 innings.

The Orioles had multiple opportunities to score. In the third, they had Mullins on second and Mancini on first with two outs, and Stewart flied to right to end the inning.

In the fourth, after Mateo’s sacrifice fly, they had Severino on second and Gutiérrez on first after Kluber hit him with a pitch. Joelly Rodriguez, who replaced Kluber, struck out Mullins to end the inning.

Rodriguez walked Mancini and Stewart with one out in the fifth. After a ground ball by Hays advanced them to second and third, Urías grounded to first to end the inning.

Conner Greene replaced Akin to start the fifth. Greene walked LeMahieu and Gallo. A run-scoring single by Anthony Rizzo brought LeMahieu home to give the Yankees a 5-2 lead.

Akin allowed four runs on three hits, walking two and striking out five. He retired eight of the last nine and threw 86 pitches in four innings.

Mullins hit a two-run home run with two outs in the sixth against Albert Abreu. It scored Gutiérrez, who beat out an infield single.

It was his 25h home run, tying him with Ryan Mountcastle for the team lead and made him the third Oriole with 25 home runs and 25 stolen bases, joining Don Baylor (1975) and Reggie Jackson (1976).

“It’s crazy,” Mullins said. “Just to be told it’s been a solid minute since someone has come around put together a 25/25 season. I’m just out there putting my all every single day and to have the results show is a pretty amazing feeling.”

He’s proud that the Orioles came into Yankee Stadium and won two of three.

“It’s huge,” Mullins said. “It just kind of goes back to us having faith in each other. We always felt like we were very competitive and it just didn’t show at times.”

Santander followed Mullins’ home run by lining to right-center, but Stanton made a fabulous play to spear it on a diving catch to end the inning.

Sánchez hit a two-run home run against Diplán in the sixth to put the Yankees ahead, 7-4.

The Orioles split their six-game road trip to Toronto and New York.

“I think we’ve played well the whole road trip, really, Toronto and then here,” Akin said. “It’s huge to come in here and win two out of three and win a series and put up the runs we did today. And shout-out to the offense. They picked it up and picked up the pitching today, so they’re the focal point of the last few innings there, in my opinion.”

Notes:  Mountcastle was rested after he fouled a ball off his right foot on Saturday. ,,, Hyde said he was waiting to decide on his rotation for the four-game Kansas City series that begins Monday at 1:05 p.m. …Zac Lowther will start Monday’s game. Hyde wanted to make sure Matt Harvey and John Means were fine physically before he announced the rest of the starters.