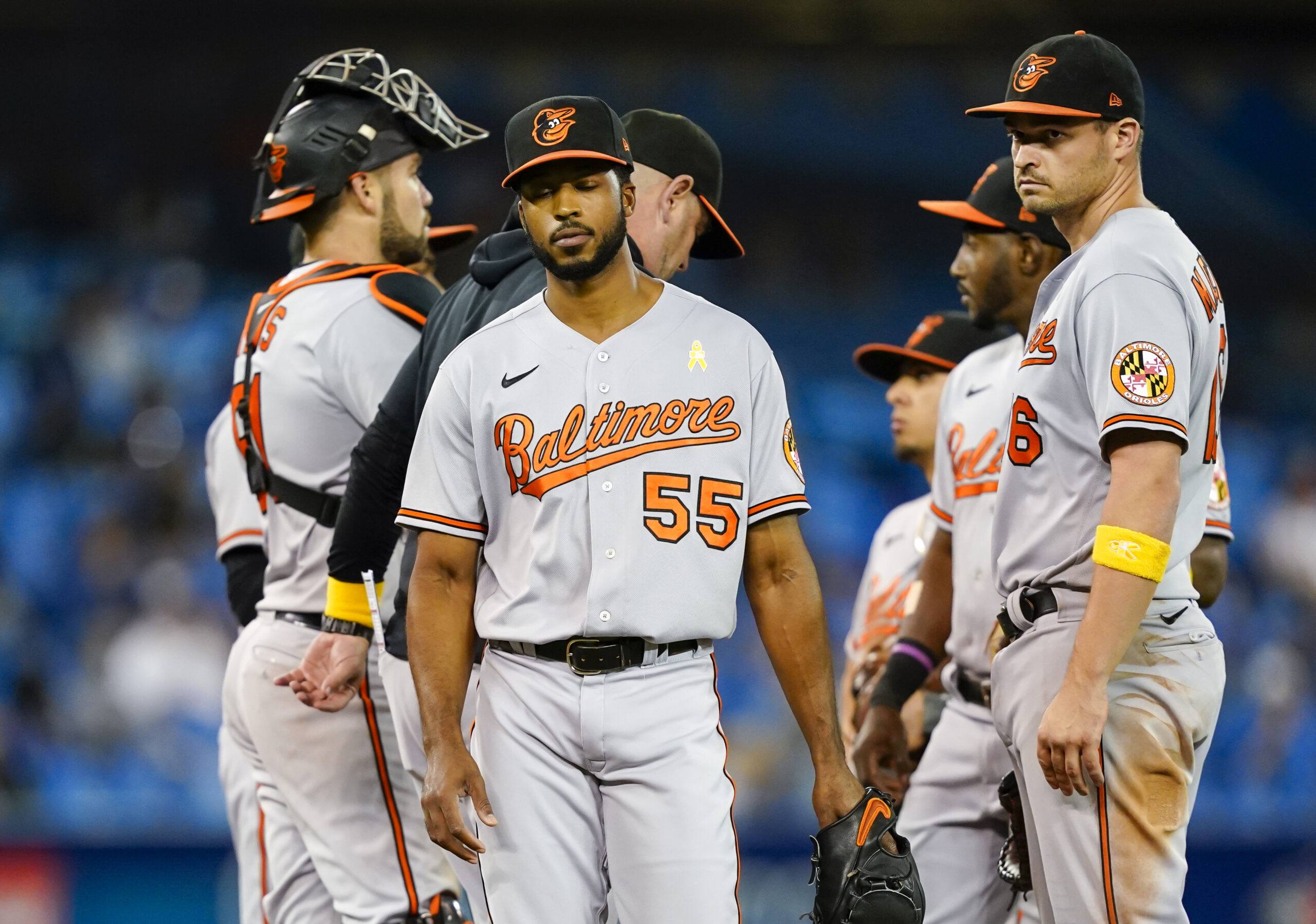 In August, the Orioles lost 24 of 28 games, just two by one run. September couldn’t come fast enough. It arrived on Wednesday, and even though the Orioles were competitive against the Toronto Blue Jays, Dillon Tate allowed a run in the eighth, and they lost, 5-4, at the Rogers Centre.

Tate couldn’t handle a dribbler by Bo Bichette to lead off the inning, and it went for an infield single. He hit Teoscar Hernández with a pitch. Alejandro Kirk’s deep fly to center allowed Bichette and Hernández to advance a base.

“He probably thought that ball was hit harder. There’s a misplay there,” manager Brandon Hyde said. “He’s a ground ball away from getting out of the inning, a double play to Hernández, but he runs the ball away and hits him.”

Marcos Diplán replaced Tate (0-5), and Randal Grichuk flied to Cedric Mullins in center. Bichette scored the go-ahead run while Hernández was thrown out in a rundown to end the inning.

“I felt Diplán had a better chance punching out Grichuk than to leave Dillon out there,” Hyde said. “He got the fastball up, and Grichuk got just enough of it up to get in far enough in the outfield.”

Tim Mayza (5-2) pitched a scoreless eighth for the win, and Jordan Romano earned his 15th save in the ninth. He was helped by a generous umpire’s call on a third strike to Mullins.

Marcus Semien’s 33rd home run with one out in the first gave Toronto (70-62) a 1-0 lead against Oriole starter Matt Harvey.

The Orioles took a 2-1 lead in the top of the second when Mullins and Ryan Mountcastle drew consecutive bases-loaded, back-to-back walks against Toronto starter Steven Matz.

“We squandered some opportunities offensively early,” Hyde said. “We probably could have gotten Matz out of that game in the second inning. The big hit eluded us. We could have put a big number up.”

The Orioles were 1-for-7 with runners in scoring position.

The Blue Jays scored three runs against Harvey in the fourth. A run-scoring single by Hernández tied the score, and Lourdes Gurriel drove in two with a hit to give the Blue Jays a 4-2 lead.

“I feel like I was throwing strikes, just not quality ones,” Harvey said. “It’s just one of those starts where physically I didn’t feel that great and it was kind of a battle from the beginning. Unfortunately, I gave up some runs in the fourth. I was trying to at least get us through five. That inning piled up on me.”

Harvey allowed four runs on six hits in four innings. He’s the only starter who has stayed in the rotation throughout the season.

“There’s still starts to be had this year, and obviously not happy with the start tonight. I wasn’t able to go deep into the game. In my mind, I should have given up one or two runs in that game and pitched until the sixth. Unfortunately, I didn’t do that.

“I couldn’t be happier that I’ve made 26 starts and taken the ball every fifth day. It’s been a long time since I’ve done that.”

Austin Wynns drove in Jorge Mateo with a single in the fifth. Trey Mancini’s double scored Mountcastle in the sixth to tie the score, 4-4.

Jorge López replaced Tanner Scott with runners on first and third and one out in the bottom of the seventh and struck out Semien and got Vladimir Guerrero Jr. to fly out to right. He was pitching for the second night in a row.

Minor league update: Hunter Harvey allowed four runs on four hits while recording only two outs as Triple-A Norfolk lost the first game of a doubleheader to Charlotte, 7-5. Harvey, who has been on the 10-day injured list for nearly two months because of a strained lat, walked one and struck out one.

Zac Lowther (0-5) gave up three runs on four hits in 5 2/3 innings. Paul Fry, who was optioned to Norfolk after Sunday’s game, retired the only batter he faced.

Kevin Smith pitched five shutout innings, allowing three hits, as the Tides beat Charlotte, 3-1, in the second game, which was shortened by rain to six innings. Smith (3-4) struck out four and walked one. Eric Hanhold registered his fourth save.

Ty Blach pitched two scoreless innings for Low-A Delmarva in their 10-8 loss to Carolina. Blach, who had Tommy John surgery in July 2020, started five games for the Orioles in 2019. First baseman Jacob Teter drove in three runs for the Shorebirds.

Double-A Bowie’s game with Somerset, and High-A Aberdeen’s game with Jersey Shore were rained out.