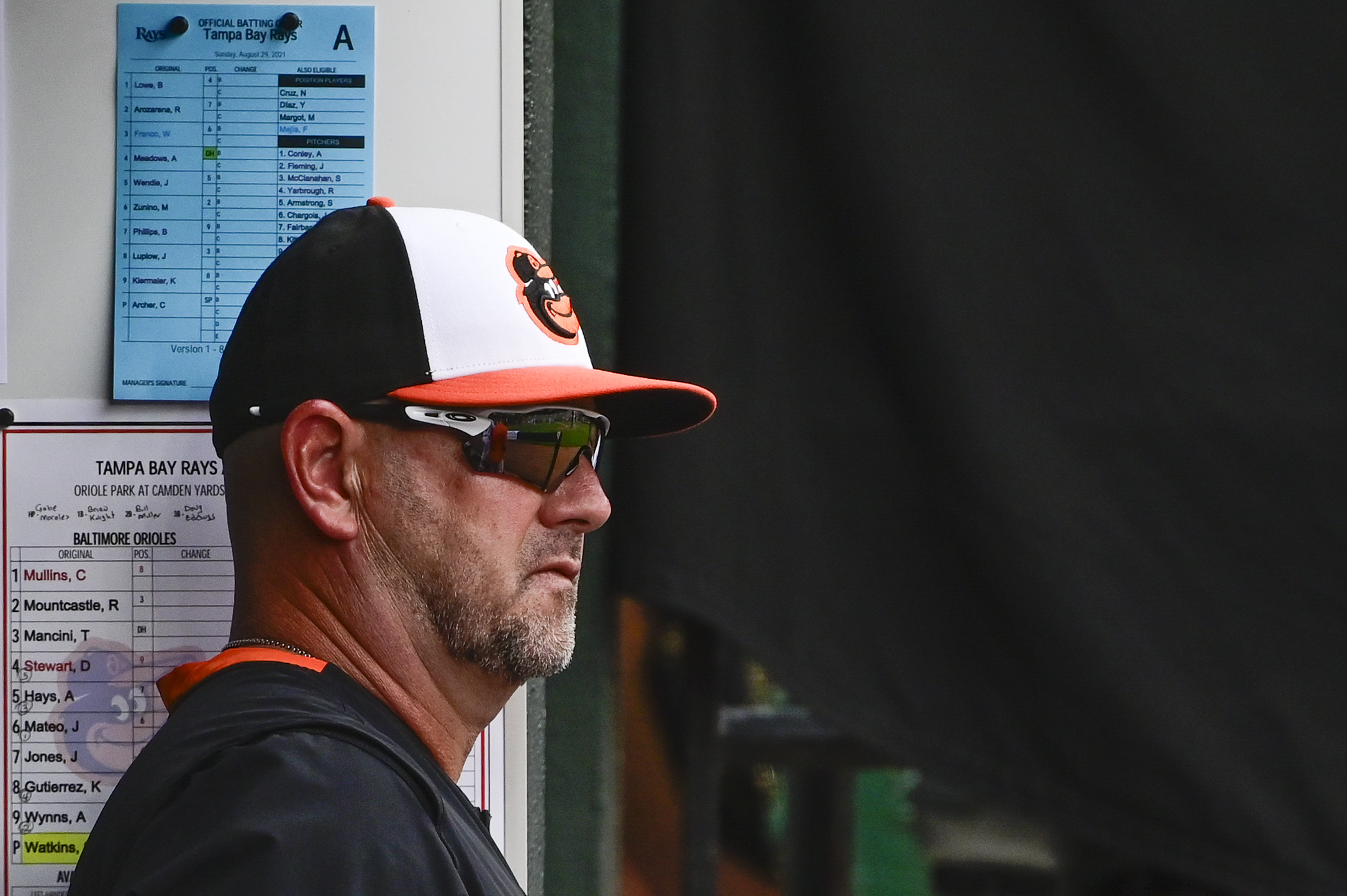 BALTIMORE—The long homestand that ended on Sunday featured the Orioles extending the second longest losing streak in their history to 19 games, a dramatic end to the streak, and then a weekend sweep by the Tampa Bay Rays.

The Orioles completed play against the Rays this season by losing for the 18th time in 19 games, 12-8, before an announced crowd of 8,353 at Camden Yards. It was the sixth time the Orioles (40-89) allowed 10 or more runs to the Rays (82-48) this season, and the 17th time this season the Orioles were swept.

“They match up really well against us,” manager Brandon Hyde said. “They always had good pitching. They play really good defense and they have an equal amount of left- and right-handed hitters that they can use to their advantage.”

Oriole starter Spenser Watkins had a rough beginning and a rough end to his day when he was sent to Triple-A Norfolk after the game. Brandon Lowe led off for the Rays with a double and scored on a single by Randy Arozarena, his 19th RBI against the Orioles this season. He beat the Orioles on Saturday night with a two-run homer in the eighth.

Arozarena stole second and, with two outs, scored on on a single by Joey Wendle to give Tampa Bay a 2-0 lead.

Jordan Luplow hit his eighth home run to lead off the second. Watkins retired the next 12 Tampa Bay hitters until Wander Franco led off the sixth with a single. Austin Meadows followed Franco with a two-run home run, his 22nd, and Wendle hit his eighth, and Jorge López replaced Watkins with the Rays leading 6-2.

Watkins was the winning pitcher on July 19th in the only game the Orioles won against Tampa Bay this season.

“They’re extremely sound,” Watkins said. “They take good at-bats, 1 through 9. There’s not really a breather there. They have a plan, and they stick to that plan.”

“It’s not easy,” Watkins said. “It’s tough. Everybody wants to win, especially as a competitor, you want to go out and win. Consistently not doing that takes a toll.

“This is where the mental preparation and trusting my stuff comes into play. I have a good surrounding cast, our pitching staff, our pitching coaches, our catchers, everybody from top to bottom to lead me through it. It’s the first taste of the big leagues. I’m learning a lot through the ups, the downs, just learning how to advance each week, how I can get better.”

Tampa Bay starter Chris Archer allowed two runs in four innings. Austin Hays hit a single to drive in Ryan Mountcastle with the Orioles’ first run in the first. Mountcastle hit his 24th homer with one out in the third. He had four hits, equaling his career high.

J.T. Chargois allowed two-out singles to Mountcastle and Trey Mancini in the fifth, but DJ Stewart struck out to end the inning.

Jorge Mateo hit his first home run as an Oriole, his third overall, a two-run homer against Josh Fleming in the sixth to cut the lead to 6-4.

Wendle hit a grand slam against Paul Fry in the seventh, giving him a six-RBI game, and the Rays were ahead 10-4. Fry also was optioned to Norfolk after the game.  He has a 21.86 ERA in 11 games in August and will try to regain his effectiveness with the Tides. His season ERA is 6.08.

The Orioles rallied in the seventh against Josh Fleming. Cedric Mullins, Mountcastle and Mancini began the inning with singles, and after Mountcastle scored on Stewart’s infield out, it was 10-6.

Austin Hays singled, and former Oriole Shawn Armstrong retired Mateo on a forceout, then hit pinch-hitter Ramón Urías with a pitch to load the bases. Kelvin Gutiérrez struck out with the bases loaded, his fourth strikeout in the game.

In the eighth, the Rays scored two runs on a bloop single to center by Franco.

“You want to go out there and win every day,” Mountcastle said. “It’s obviously a lot more fun when you win. I’ve just got to keep working hard. We’re all going to keep pounding away the rest of the season and hopefully get some more wins down the stretch here.”

Hunter Harvey, who’s on the 10-day injured list because of a right lat strain, won’t be going on the trip. “He had a little bit of soreness after his last outing,” Hyde said. Harvey is rehabbing at Triple-A Norfolk. “He’s playing catch today and hopefully he’ll be back on the mound in the next couple of days.” Hyde said he thought the soreness was minor. … Alexander Wells, who started for the Tides on Saturday night, was pulled after two innings so he could be ready if the Orioles need him on the road trip.

Call for Questions: I’ll be answering your Orioles questions later this week. Please leave your questions in the comments below or email them to: [email protected].