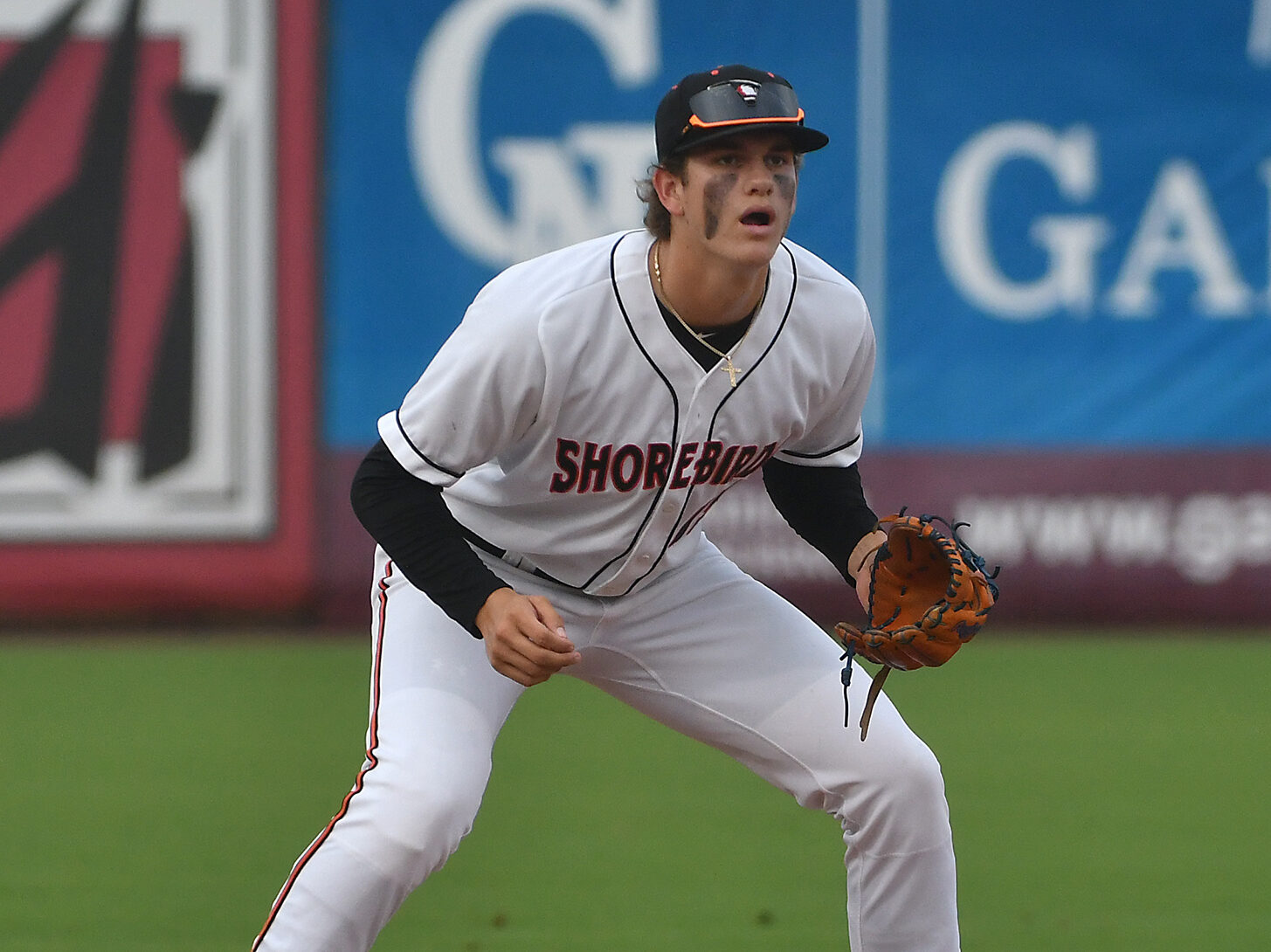 Delmarva third baseman Coby Mayo had the opportunity to work out with Anthony Rizzo of the New York Yankees during the offseason.

They attended the same high school, Stoneman Douglas, in Parkland, Florida., so they already had a bond.

“I didn’t get a chance to play with any of those guys, but I am super close with all of them.” Mayo said. “I worked out in the offseason with Rizzo. It’s great to pick his brain about this and be there every day with him.”

Mayo earned his promotion to Low-A Delmarva after getting experience in extended spring training and the Florida Complex League for most of the summer. He slashed .329/.440/.566/.1.005 in 25 games with six doubles, four homers, five stolen bases and 15 RBIs.

“It’s been good over here,” Mayo said. “It’s a big change from living in South Florida. The schedule is a lot later than down there. I’m adapting to it. I’m having a great time, and I’m happy to be here. The play has been good. A little bit more fast-paced. The fans are great. I’m not used to having 2,000 fans there at a game but ,like I said, I’m adapting and it’s been a blast.”

Mayo is rated as the Orioles’ No. 14 prospect by MLBPipeline.com and No. 15 by Baseball America.

He’s adjusting to the pro game at third base. He has three hits, including a double and an RBI, in his first 17 at-bats for Delmarva.

“I think it’s just one step up from high school,” Mayo said. “I wouldn’t say it’s challenging, but it’s more fast-paced and you have to be more on your toes.”

Mayo has shown power at every step. He could be a force in the middle of the Orioles one day. MLBPipeline.com grades his power as 60, and he ranked near the top of their exit velocity readings during the 2020 instructional camp.

“I feel like I am doing a really good job in the weight room keeping myself strong,” Mayo said. “I am feeling really good at the plate … [The coaches] are very player-friendly and they know a lot about the game. I think everyone respects each other and that’s the best thing about it. Being in South Florida with these guys and then coming up here and being with them again has been really fun.”

Mayo has long-term goals, but he is focused on helping Delmarva reach the playoffs.

“We’re in the last stage of a playoff push and if we can grind together some wins, hopefully, we’ll get enough wins to get to a playoff spot,” Mayo said.

The Shorebirds promoted 12 other recent draft picks and signings to their roster, including Colton Cowser, the Orioles’ first-round pick.

Cowser was selected fifth overall out of Sam Houston State, where he slashed .374/.490/.680 with 16 home runs and 52 RBIs in 55 games this past season. Cowser began his professional career with the Florida Complex Leauge Orioles Orange, going 11-for-22 (.500) with a homer and eight RBIs.

Cowser managed a walk-off single in the 10th inning for a 5-4 win against the Fredericksburg Nationals on Saturday.

Jannis has a solid debut: Knuckleballer Mickey Jannis was stellar in his first start with the Bowie Baysox, throwing six innings and allowing just one run on five hits with two walks and two strikeouts in the 5-3 win over the Reading Fightin Phils in 10 innings on Friday. First baseman Andrew Daschbach had two homers.

Jannis allowed seven runs on eight hits in his only appearance for the Orioles on June 23rd.

Ron Johnson honored: Longtime Norfolk Tides manager Ron Johnson will be inducted into the Tidewater Baseball Shrine at Harbor Park in between games of Norfolk’s scheduled doubleheader against the Charlotte Knights on  September 1st. Johnson managed the Tides during the final seven seasons of his career from 2012-18 and amassed 491 wins, making him the winningest and longest-tenured manager in franchise history.  The Tidewater Baseball Shrine recognizes players and executives who have significantly contributed to the game of baseball in the Tidewater area. Johnson died on January 26th at 64 of  Covid-19.