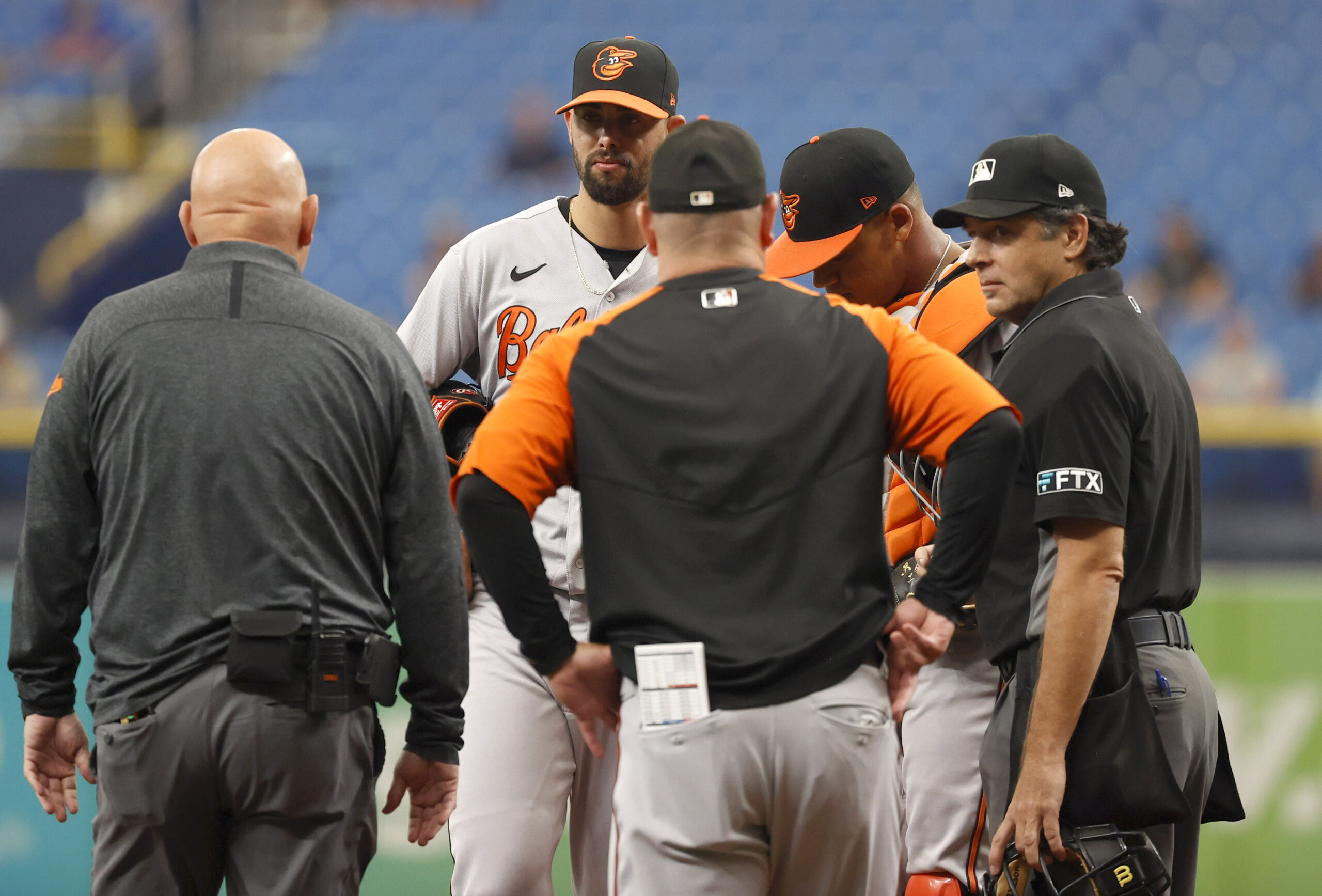 Jorge Lopez lasted only two innings against the Tampa Bay Rays on Thursday afternoon. His fastball velocity was down, but he was determined to keep his head up, even after another loss by the Orioles, their 15th in a row, 7-2 at Tropicana Field in St. Petersburg, Florida.

Lopez (3-14) has been dealing with more than his struggles on the field. His son son underwent chemo treatments and a bone marrow transplant this summer. Asked if he thought he could benefit from a break, he said:

“I worked my whole life to get there, and that’s the last thing I’ll do is give up. I’ll come back stronger with a good mentality. We’ve all been through the same thing. It’s just part of this game, keep learning and trusting the process.

“Nobody wants to be in this spot. I promise that. I’m just going to keep my head up and looking forward. That’s what I can do, be strong.”

The Orioles are a mess at this point. The 15-game losing streak is the second longest in team history, surpassing the 14-game skid in May of this season. The only longer streak came when they began the 1988 season with 21 straight losses. They have lost every game in their current losing streak by multiple runs.

“Right now, we’re not even in the game,” manager Brandon Hyde said.

The Orioles (38-82) secured their fifth straight losing season on Thursday. To avoid losing 100, they would need to finish 25-17. They were swept for the 15th time and completed their fourth winless road trip.

“We’re not in many games, and that’s hard,” Hyde said. “One thing that I was proud of the last couple of years was in a lot of our losses, we made it closer. We might have blown a game late and done some things to lose, but we played a lot of close games.”

Lopez was in trouble immediately. Brandon Lowe doubled, and Wander Franco was hit by a pitch. Nelson Cruz walked to load the bases. Austin Meadows walked after he hit a pop foul that neither catcher Pedro Severino or third baseman Ramon Urias caught. It’s the kind of mistake that has hurt the Orioles repeatedly during this streak. Lowe scored on the walk, and Ji-Man Choi hit into a double play that scored Franco.

Hyde and Brian Ebel, the team’s head athletic trainer, went to the mound for an extended visit with Lopez, who stayed in and struck out Randy Arozarena to end the first.

“I felt I was a little anxious,” Lopez said. “I felt really good. I’m just going to keep mentally strong and get back tomorrow to keep working.”

Hyde said the mound visit was because he noticed Lopez’s fastball’s velocity dropped dramatically, and he wanted to make sure there wasn’t anything wrong with him.

“He said he was OK physically. He just wasn’t himself today,” Hyde said. “He felt fine. He’s working through some things right now.”

Hyde didn’t see any indication before the game that Lopez wasn’t ready to pitch.

“I felt he was ready to go, and I don’t know why the velocity dropped dramatically the way it did,” Hyde said. “After the hit-by-pitch [to Franco], it seemed like the stuff wasn’t the same. He was just flipping the ball up there.”

Lowe hit a two-run homer in the second. He has five homers and 19 RBIs in 16 games against the Orioles this season.

After two innings, Lopez (3-4)  was replaced by Fernando Abad, who pitched a scoreless third but loaded the bases with one out in the fourth. Abad was replaced by Marcos Diplan. Meadows drew his second bases-loaded walk of the game, and Choi delivered a two-run single on a ground ball that normally would have gone to the shortstop, but the Orioles were in a shift. Tampa Bay (75-47)  led, 7-0.

The Orioles scored against Shane McClanahan in the fifth when Richie Martin’s RBI single scored Urias, who lined a  pitch off the left-field wall. McClanahan (8-4) gave up a run on five hits in five innings, striking out eight.

Urias hit his sixth home run with two outs in the ninth.

The Orioles are 1-15 against Tampa Bay this season. They begin a nine-game homestand against Atlanta, the Los Angeles Angels and the Rays on Friday night.

Notes: Hunter Harvey, who allowed a run on three hits for Triple-A Norfolk in a rehab outing on Wednesday night, will get another one, Hyde said. “He’s scheduled to pitch in a couple of days,” Hyde said.” He could pitch another inning or perhaps more. “Then, we’ll decide at that point if he’ll stay there or come up.” Harvey is on the 10-day injured list because of a lat strain.

Ryan Mountcastle has an 11-game hitting streak and Jorge Mateo has a 10-game streak. …The Orioles open a three-game series against Atlanta on Friday night. Keegan Akin (0-7, 8.13 ERA) will face Max Fried (10-7, 3.78). … The Orioles released infielder Domingo Leyba, who had been at Triple-A Norfolk. Leyba batted .154 with a home run and four RBIs in 21 games with the Orioles. … Trey Mancini returned to the lineup after missing two games after fouling a ball off his calf. He was  hitless in four at-bats as the designated hitter.

Looking ahead: With the last quarter of the season beginning Friday, the Orioles will look at who might get promoted on September 1st when two players will be added to the roster.

“When it comes to roster decisions,” Hyde said, “whether it’s bringing up infielders or how many pitchers to bring here, that’s up to [general manager Mike Elias] and the front office on when to determine if a prospect is ready or somebody they want to see in September. Those decisions are starting to happen now, but with the expanded roster only going to 28, it’s a little bit more difficult this year, as well, not being able to see more guys.”

Hyde said the pitching choices at Triple-A Norfolk were limited. He mentioned right-hander Dean Kremer, whose command has been better recently, and some minor league free agents.

“Nobody’s been knocking the door down to come back, and we’ve really taken a look at everybody,” Hyde said. “I’m going with the group that I’ve got right now, and we’ll see what happens.”