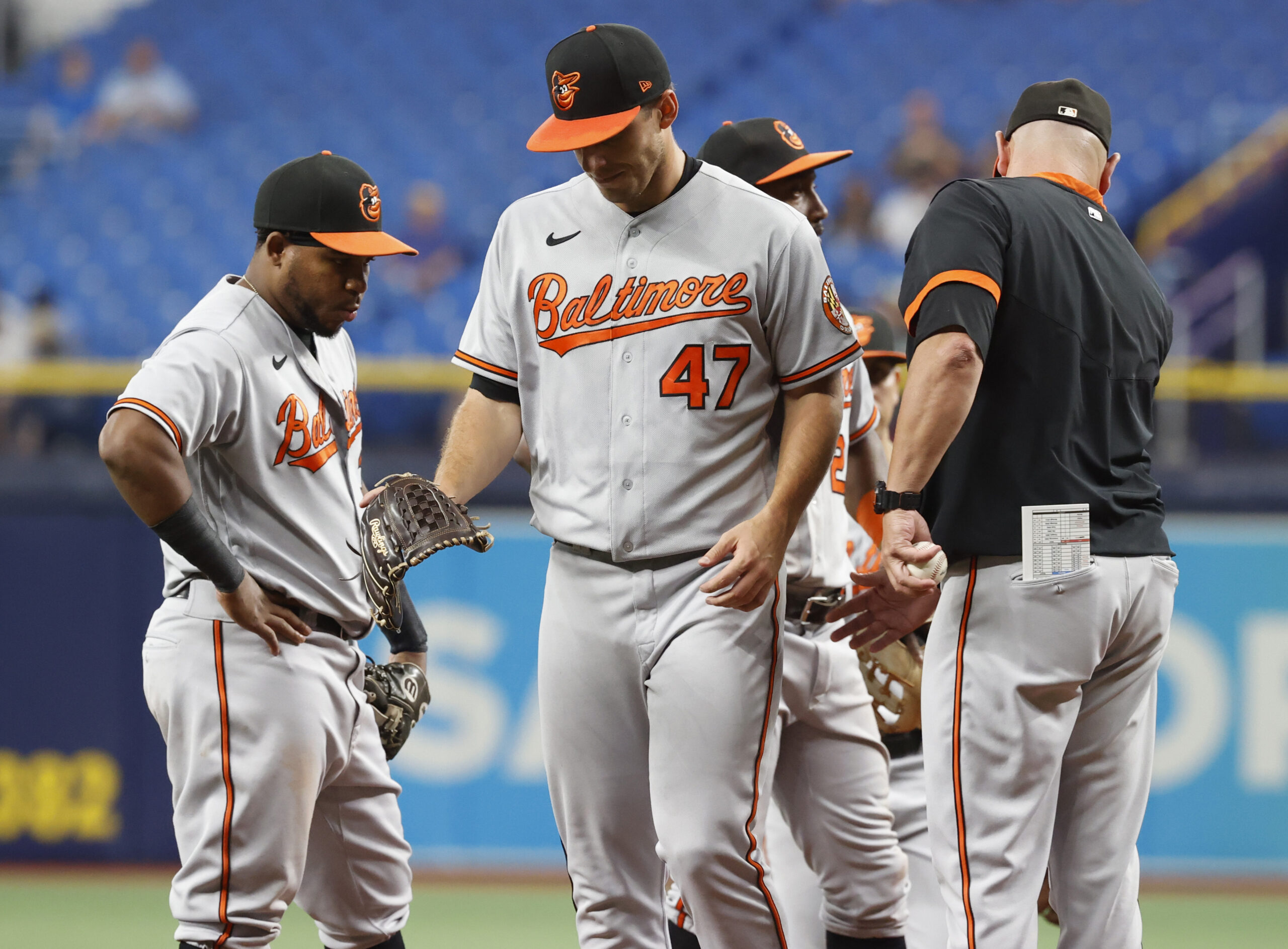 The Orioles hoped that starter John Means could put an end to their long losing streak. He couldn’t, and the Orioles have now lost 13 straight, one shy of the second-longest streak in club history.

The Orioles lost 14 straight in their inaugural season, 1954, and again from May 18-31. Unless they win on Wednesday night, they’ll have their third 14-game skid and second this season.

They’re the first American League team with a pair of 13-game losing streaks in a season, and they’ve lost 13 of 14 to Tampa Bay in 2021.

The Orioles allowed 10 or more runs for the sixth time during this losing streak and have been outscored, 123-36.

“It’s awful. It hasn’t been easy,” Means said. “A lot of guys are losing sleep. The guys are frustrated with what they’re doing, especially me. I need to be better. I need to do better, and the only way to do that is to keep adjusting, trying to get the work in between starts and move on.”

Means was dominant in the first three innings, striking out seven of the first 11 batters he faced. In the fourth, shortstop Jorge Mateo booted a routine ground ball by leadoff hitter Wander Franco. He scored on a double by Manuel Margot. Mike Zunino followed with his 26th home run to give Tampa Bay (73-47) a 3-0 lead.

Means (5-5), who has won just once since his May 5th no-hitter against Seattle, gave up Nelson Cruz’s 25th home run, a three-run shot, and was removed after a single by Franco.

“I thought my pitch to Zunino was pretty good,” Means said. “He just got to it. The one to Cruz, I thought I left a little bit middle, but I liked my stuff tonight. I just did not get the results that I wanted.

“I felt like today we were really going to turn it around. It’s definitely not for lack of effort.”

Reliever Marcos Diplan, who hadn’t allowed a hit in his first four appearances, saw that streak end on a double by Brandon Lowe. The run was charged to Means.

The fifth run of the inning scored when second baseman Ramon Urias dropped a pop fly for an error. Oriole pitching wasn’t helped by the defense.

Cruz hit his second homer of the game against Tanner Scott in the sixth with Randy Arozarena on base, and the Rays had a 10-0 lead against a team that appears overmatched each game during this latest skid.

The Orioles (38-80) had just four hits against three Tampa Bay pitchers, including a ground-rule double in the ninth by Ryan Mountcastle. Drew Rasmussen started and allowed one hit in four innings. Adam Conley pitched a spotless fifth. Chris Ellis (1-0) spread three hits over four innings for the win.

Mateo had two hits but his defense was shaky.

After Monday night’s loss, manager Brandon Hyde said that he thought the Orioles’ hitters were pressing. He said the same could be true of Means and the starters.

“I’m sure his thoughts were to stop this,” Hyde said. “To pick us up because he’s a super competitor and he’s a good starting pitchers, and he’s going to be good, and he showed it in the first few innings. He just didn’t make pitches there in the fourth or in the fifth. I don’t know if he was trying too much or just not executing.”

Notes: Right-handed pitcher Adam Plutko cleared outright waivers and accepted an assignment to Triple-A Norfolk. … Spenser Watkins (2-4, 5.25 ERA) will pitch for the Orioles on Wednesday. Louis Head (1-0, 1.85) will open for the Rays and is scheduled to be followed by Ryan Yarbrough. … Five National League teams have had multiple 13-game losing streaks in a season. Arizona did it earlier this season. The 1962 New York Mets, the 1919 Philadelphia Phillies and Boston  (1911 and 1935) are the others. … The Orioles were shut out for the seventh time this season and the first time since June 24.th

Minor league update: Colton Cowser doubled and drove in a run in his debut for Low-A Delmarva as the Shorebirds beat Fredericksburg, 10-1. Cowser, the Orioles’ first-round pick, led a group of 2021 draftees who were added to Delmarva’s roster on Monday.

Grayson Rodriguez allowed a run on two hits in five innings in Double-A Bowie’s 3-2 loss to Reading. Rodriguez struck out six and walked one.

High-A Aberdeen was held to four hits in a 4-0 loss to Wilmington. Shortstop Gunnar Henderson had two of the four hits.

Norfolk’s game at Charlotte was rained out. The teams will play a doubleheader on Wednesday.