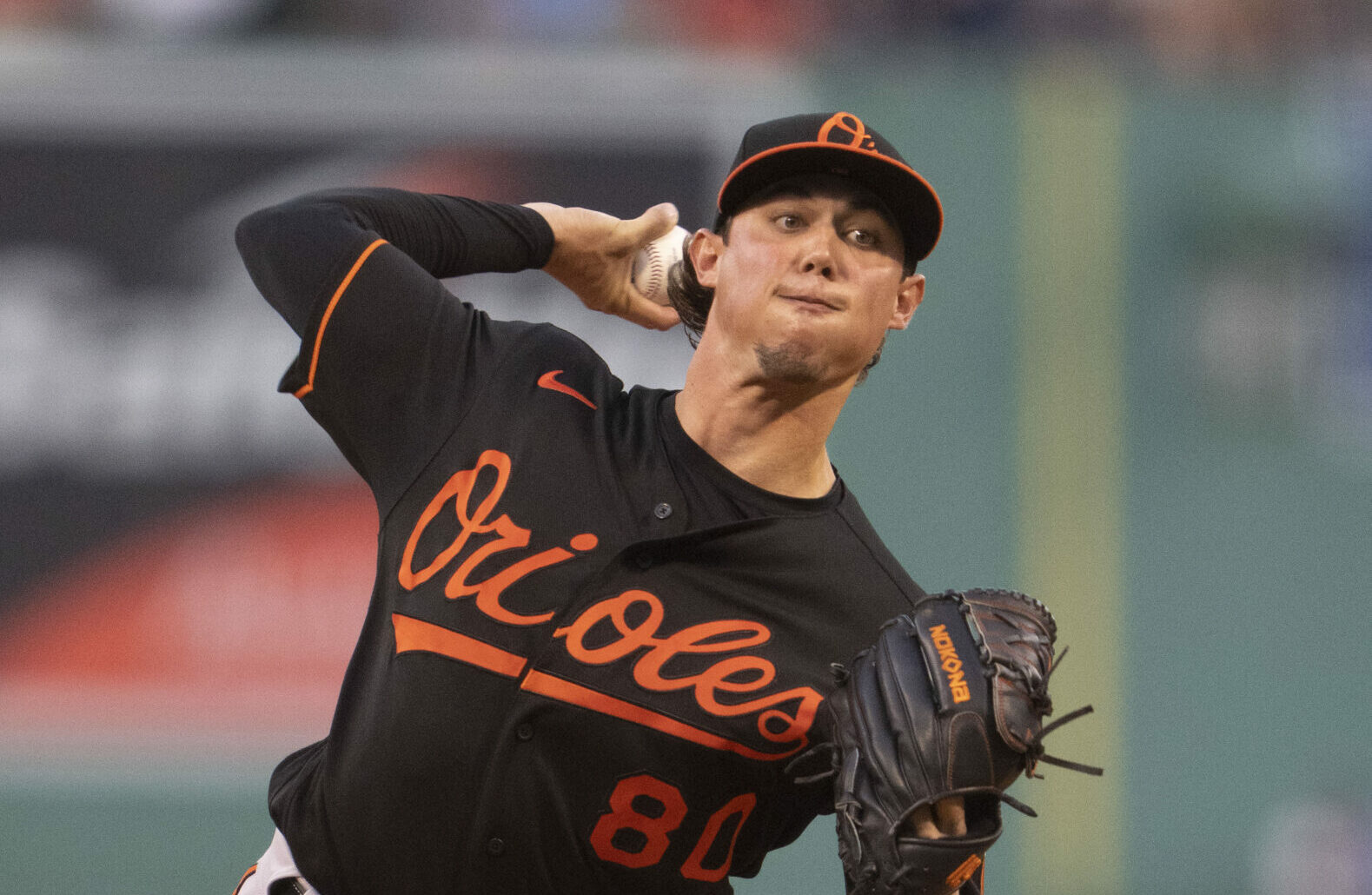 BOSTON—The Orioles won 10 times in 16 games to begin the second half of the season. Since then, things have gone steadily south. Playing the top two teams in the American League East isn’t likely to change that.

On Friday night in Boston, they were no match for the Red Sox. Pitcher Spenser Watkins, who got off to a good start in the major leagues, gave up six runs in four innings and lost his fourth straight as the Orioles dropped their ninth game in a row, 8-1 to the Red Sox before an announced crowd of 28,022 at Fenway Park.

It was the start of a seven-game road trip to Boston and Tampa Bay for the Orioles (38-76). And it began poorly after centerfielder Cedric Mullins singled sharply to right and reached second with no outs on an errant throw to first by Boston starter Nick Pivetta. Mullins didn’t score.

After going 0-for-23 with runners in scoring position in their three losses to Detroit at home, the Orioles were hitless in five attempts against the Red Sox to extend the streak for 0-for-28. Only shortstop Richie Martin’s home run in the third, which tucked inside the right-field foul pole and traveled 320 feet,  prevented a shutout.

The nine consecutive losses represent the Orioles’ second-longest losing streak of the season. They dropped 14 in a row from May 18th-31st, equaling the second longest in team history.

“We’re playing better teams,” manager Brandon Hyde said. “We’ve got to be able to match the intensity of a team in a pennant race. We’ve given away some games.

“We gave away a couple of games against Tampa. We gave away a game against New York. We didn’t play real well against Detroit. Now, we’re playing Boston at Fenway. They added at the [trading] deadline, and they’re trying to get to the postseason. We have to be able to play relaxed and with nothing to lose. Tonight, we just got beat.”

After Mullins began the game with a single that ran his hitting streak to 20 games (longest by an Oriole since Adam Jones hit in 20 in a row in 2012) and moved to second on Pivetta’s throwing error, Anthony Santander struck out. Trey Mancini, who doesn’t have an RBI since July 28th, grounded out, as Mullins took third. DJ Stewart walked, and Austin Hays popped to short.

They didn’t have another scoring chance until Hays was caught looking by Pivetta with Santander on second and two outs in the sixth. In the bottom of the ninth, Martin struck out with Jorge Mateo on second and Pedro Severino on third with two outs.

“It was a combination of Pivetta and a lot of chases out of the zone,” Hyde said. “We’re mostly right-handed, which doesn’t help, either, against a guy like that.

“We didn’t square many balls up. We didn’t put any pressure on him, really.”

The Red Sox (67-51) scored four times against Watkins in the second. Hunter Renfroe singled and, in his first at-bat with Boston, Kyle Schwarber walked before Kevin Plawecki singled to load the bases.

A single by Jarren Duran scored Renfroe, and a double by Bobby Dalbec brought in Schwarber and Plawecki. A sacrifice fly by Kiké Hernández’ scored Duran.

Martin’s homer to lead off the third, which dropped inside the Pesky Pole, was his first home run since September 28, 2019, which he also hit at Fenway. Stewart nearly had his third home run in two days, but Renfroe made a leaping catch before it could land in the Orioles’ bullpen in right for the first out of the fourth.

Watkins (2-4) gave up an RBI double to Duran in the third and Xander Bogaerts’ 18th homer in the fourth.

“I wouldn’t even say it was the lineup,” Watkins said. “I thought it was more so battling myself. I was battling my sweating and trying to find a grip on the ball. I need to do a better job of overcoming and executing. The lineup is 1 through 9, just like any other lineup is. It’s just sticking to my guns and continuing to attack, and not allowing something like sweat to creep in and get me off my focus.”

Watkins has started in Baltimore three times and at Tampa Bay and Detroit, but Fenway is different.

“Same as any other place but, of course, Fenway is Fenway, and any baseball player can go into that field and be a little bit wide-eyed,” Watkins said. “I felt like it was more so me just staying focused mentally.

“Was there crowd noise? Absolutely, but there’s crowd noise everywhere. I think it’s just a matter of me staying focused.”

Dalbec’s 12th home run against Dusten Knight in the sixth, and Renfroe’s 20th off César Valdez in the seventh gave Boston an 8-1 lead.

Garrett Richards pitched three scoreless innings for his first save.

“Anytime you run into a skid, it’s tough,” Watkins said. “We have a good group of guys. We have a good core of veterans that keep the emotions in check and keep the guys on the right path and always looking forward.

“You can’t change what’s happened. You can’t change the losses, so we have a good group of guys that are pushing us to stay forward as well as our staff. It is what it is. It sucks, of course, but we’ve got the right group to go forward.”

First baseman Tyler Nevin had two RBIs, and Thomas Eshelman and Isaac Mattson combined for four scoreless innings in relief, allowing just one hit. Mattson picked up his second save.

Double-A Bowie’s game with Richmond was postponed and will be made up with a doubleheader on Saturday beginning at 5:05 p.m.