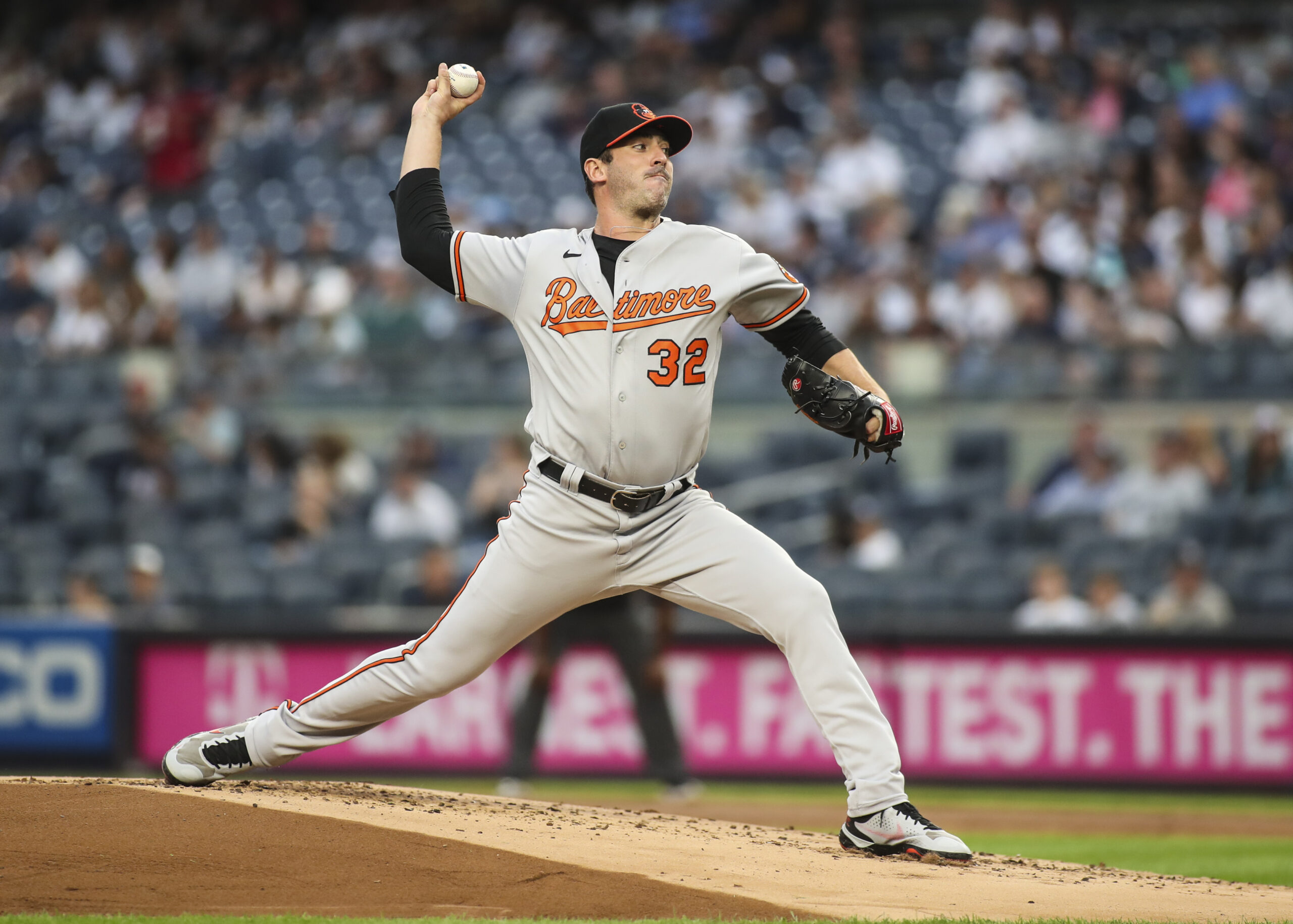 NEW YORK—The Orioles and Yankees were tied 3-3 heading to the seventh, Baltimore having already spotted New York a run with poor defense in the fourth. Then, walks and more shoddy defense led to a five-run inning, and the Orioles, who once led 3-0, watched New York run away to a 10-3 victory before 30,055 at Yankee Stadium on Wednesday night.

The Orioles (38-69), who played what manager Brandon Hyde said was their “most complete game” on Monday night, came apart completely in the final two games and were outscored by New York, 23-4.

Starting pitcher Matt Harvey, who hadn’t given up a run in 18 1/3 innings, extended that streak until the fourth but was forced to leave the game because of a right knee injury. Harvey said he tweaked the knee when Gleyber Torres grounded back to him to end the second.

“It was nothing serious,” Harvey said. In the fourth inning, he tried to cover first base when the Orioles tried to turn a double play on Joey Gallo’s grounder to Ryan Mountcastle.

“Going forward in the outing, I felt like I couldn’t quite push off the rubber and stay in my mechanics the way I needed to, especially against a lineup like that. I was trying to push through it, trying to get through at least five. They could tell I was in a little bit of pain.

“I felt so good early in the outing, and then that happened. I wanted to keep us in the game longer and keep the bullpen from being used, and pretty frustrated with that.”

Hyde said he thought Harvey would be able to make his next start with the help of days off on Thursday and Monday.

Cedric Mullins led off the first with a single, extending his hitting streak to 13 games. Ramón Urías singled to left and, after Mullins took third, Urías got to second on an error by Gallo. After Trey Mancini struck out, Mountcastle flew out to Aaron Judge in right.

Mullins tagged and slid home just ahead of Judge’s strong throw. Austin Hays dropped a single in front of Gallo in left, and Urías scored for a 2-0 lead.

Mountcastle hit his 19th home run in the fourth against Jameson Taillon to give the Orioles a 3-0 lead.

With one out in the fourth, Rizzo ended Harvey’s streak with a home run to right field, his 17th.

Judge followed with towering fly to shallow right field that appeared as if it would be the second out. However, Urias, playing second base, was in the shift and closer to second, Mountcastle didn’t pursue the ball and DJ Stewart couldn’t get in from right field in time as the ball dropped for a single. Judge also thought it would be caught because he wasn’t running.

Gallo hit into the force play, which would have been the third out. Giancarlo Stanton walked, and Torres singled to right to score Gallo. The Orioles’ lead was down to 3-2 and Harvey was out of the game.

“I got right in and iced it and put some compression on it,” he said. “I don’t think it’s serious at all.”

César Valdez replaced Harvey for the fifth and allowed a leadoff double to Kyle Higashioka, who advanced to third on Brett Gardner’s grounder to first. DJ LeMahieu’s single scored Higashioka to tie the score at 3.

Cole Sulser (3-2) pitched a scoreless sixth but began the seventh by walking Higashioka. Paul Fry was summoned and walked pinch-hitter Gary Sánchez. LeMahieu smacked a ball that went through Fry’s legs and off Urías’ glove at second, scoring Higashioka to give New York (58-49)  a 4-3 lead.

After Rizzo flied to left, Dillon Tate struck out Judge but walked Gallo to load the bases.

He then appeared to retire Stanton on another fly to short right field, although this one was more toward the line.  Mountcastle tried to run it down but it was just beyond his reach. Stewart got a late jump and wasn’t in position to catch it. The short fly resulted in a three-run double and a 7-3 lead.

“I just had to put my head down and run and, unfortunately, I couldn’t get there,” Mountcastle said. “That’s baseball. You hit it in the right spot at the right time. It’s unfortunate.

“They were hitting them in the right spots at the right times. It’s a tough place to play. It was a little windy today.”

Torres followed with a double to make 8-3.

“We didn’t play our best defense tonight,” Hyde said. “It’s a 3-3 game in the seventh inning. You walk a bottom-of-the-order guy and you walk another guy. Tough time against this type of lineup to allow free passes. Tonight we allowed extra runners and runs to score on balls that fell. It’s really hard to recover against a lineup like this.”

Jonathan Loaisiga (8-4) recorded two outs in the seventh in relief of Taillon.

The Orioles’ misfortunes continued in the eighth when, trailing by five runs, Mullins decided to try for a double but was thrown out at second by Judge.

Dusten Knight, who was making his major league debut, allowed two runs in the eighth on a double by LeMahieu.

Richie Martin played shortstop and made a sensational play on a ground ball by Judge in the fifth, catching the ball going far to his right and throwing out Judge from short left field.

Adley Rutschman, playing first base, had two hits and rightfielder Yusniel Diaz, doubled in three at-bats in his rehab assignment.

Kade Strowd (0-3) allowed a run in the sixth and seventh.

Triple-A Norfolk’s doubleheader with Jacksonville was postponed by rain.