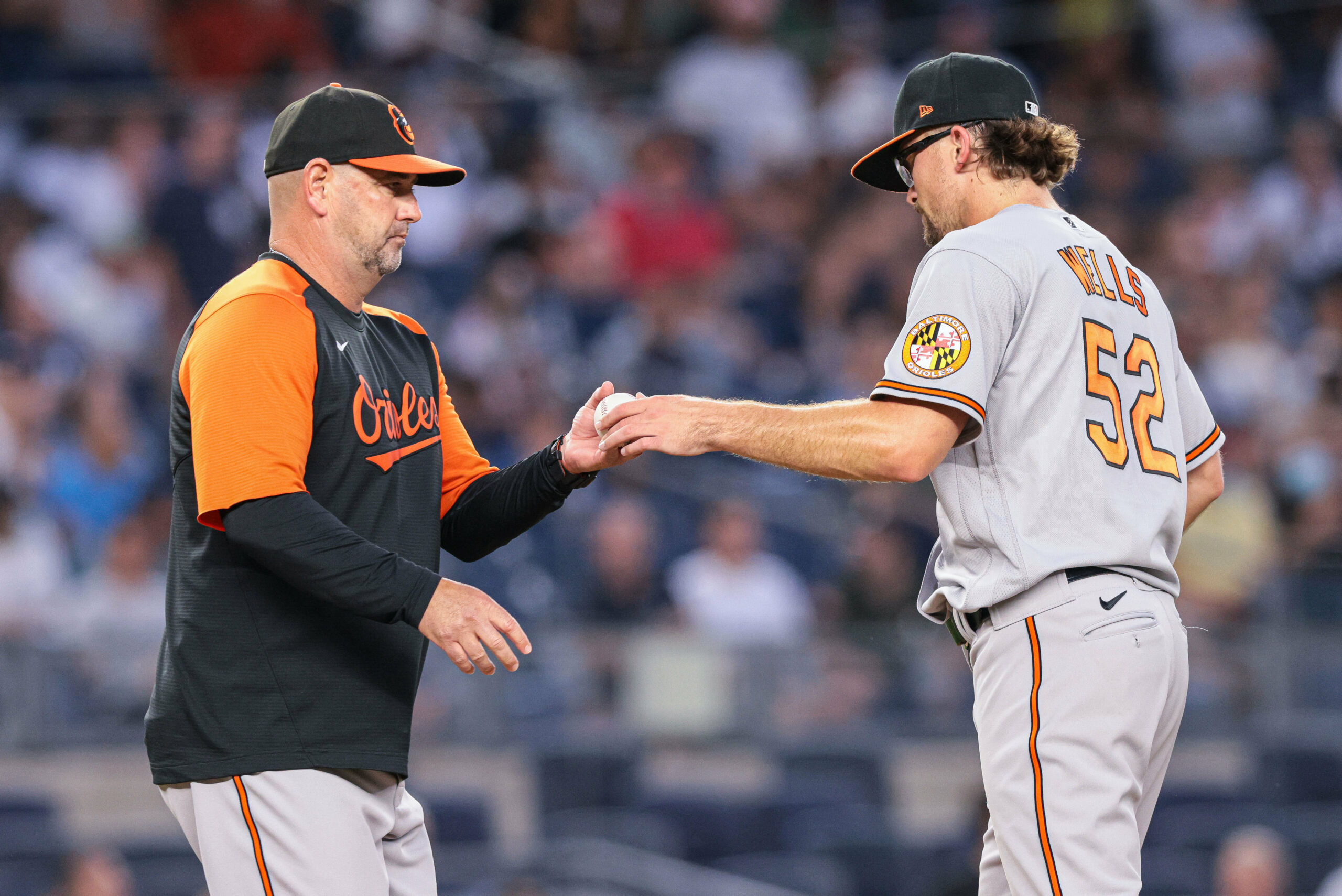 NEW YORK—After Monday night’s Orioles win, manager Brandon Hyde said it was his team’s most complete game of the season. A night later, the Orioles played a game in which nothing seemed to go right.

Starting pitcher Alexander Wells allowed six runs in 2 1/3 innings, Cedric Mulllins threw a ball from center field that hit second base squarely, and he and rightfielder Anthony Santander couldn’t decide who would catch DJ LeMahieu’s fly ball, and it fell for a double.

Gleyber Torres’ RBI single in the second gave New York (57-49) a 1-0 lead. Wells (1-2) hit Greg Allen to begin the third, and he scored on a double by LeMahieu. Anthony Rizzo singled to center, Mullins’ throw hit second base and LeMahieu scored.

Giancarlo Stanton had a run-scoring single, and Gary Sánchez’s RBI double was Wells’ final batter. A sacrifice fly by Torres put the Orioles behind, 6-0.

“Second time through the order, they made some adjustments against him,” manager Brandon Hyde said. “A little predictable for me. He left some balls thigh high and took some good swings against him.”

Wells gave up six runs on seven hits in his third start.

“I didn’t throw enough quality strikes,” Wells said. “I fell behind a lot tonight, and when I did throw a strike, they were ready to hit it.”

After the game, the Orioles optioned Wells, who has a 7.64 ERA, back to Triple-A Norfolk.

With one out in the fourth, LeMahieu’s fly to right-center fell between Mullins and Santander for a double. After Rizzo singled and Aaron Judge was struck out by Adam Plutko, Stanton hit his 17th home run, and the Orioles were down, 9-0.

The Orioles (38-68) were handcuffed by rookie right-handed Luis Gil, who was given the start when Gerrit Cole tested positive for Covid-19. Another Yankees starter, Jordan Montgomery, also tested positive.

“I was a little disappointed,” Hyde said. “I thought we left the zone way too often against him. Starting in the first inning, we were swinging at elevated heaters at the top of the zone and above.

“The guy’s got a great arm. We knew we had to push his fastball down, and we didn’t do that. We got him in a rhythm.

“We were a little too aggressive against a pitcher with really good stuff. I didn’t think we took our best at-bats. Tonight wasn’t one of our better nights.”

Ryan Mountcastle had an infield single in the first when he collided with Rizzo at first. Santander and Austin Hays had consecutive two-out singles in the fourth, and in the fifth, Ramón Urías singled with one out and Santander walked with two outs. Gil caught Hays looking to end the sixth.

“An outing like that definitely breeds confidence,” Akin said. “Definitely the best I’ve felt this year. I’ve got to bottle that up and keep it and roll with it.”

The Orioles scored their run against rookie reliever Brody Koerner in the eighth on a single by Mullins and an RBI double by Mountcastle.

Martin back: Richie Martin, who was activated from the 60-day injured list, is glad to be back. He suffered a fractured left wrist playing center field for Triple-A Norfolk, but he’s expected to play exclusively in the infield for the Orioles.

“It was very frustrating,” Martin said. “It was kind of a freak accident. It wasn’t as planned, but a lot of times, things don’t go as planned.”

Martin can play the outfield, but he’s looked upon as an infielder.

“I’m going to continue to take balls at short and second,” he said. “Wherever they need me, I’ll be available.”

Hyde is going to continue to use Ramón Urías at short and Pat Valaika at second.

“Right now, he’s a utility player for us,” Hyde said. “We’re in August, and guys are going to get days off. Richie going to play in the infield, primarily in the middle. We’ll go from there. I don’t really have a set plan in place.

“We’ve been playing Ramón and Pat. They’ve been doing a very nice job  up the middle. Richie will fit in.”

Martin came in to play short in the bottom of the sixth and was hitless in one at-bat. He became the 49th player used by the Orioles this season.

Mattson, who pitched one game for the Orioles earlier this season, has a 9.53 ERA.

Designated hitter Yusniel Diaz, who is rehabbing a turf toe with Bowie this week, was hitless in four at-bats, striking out three times.

Infielder Greg Cullen has been placed on Bowie’s injured list.