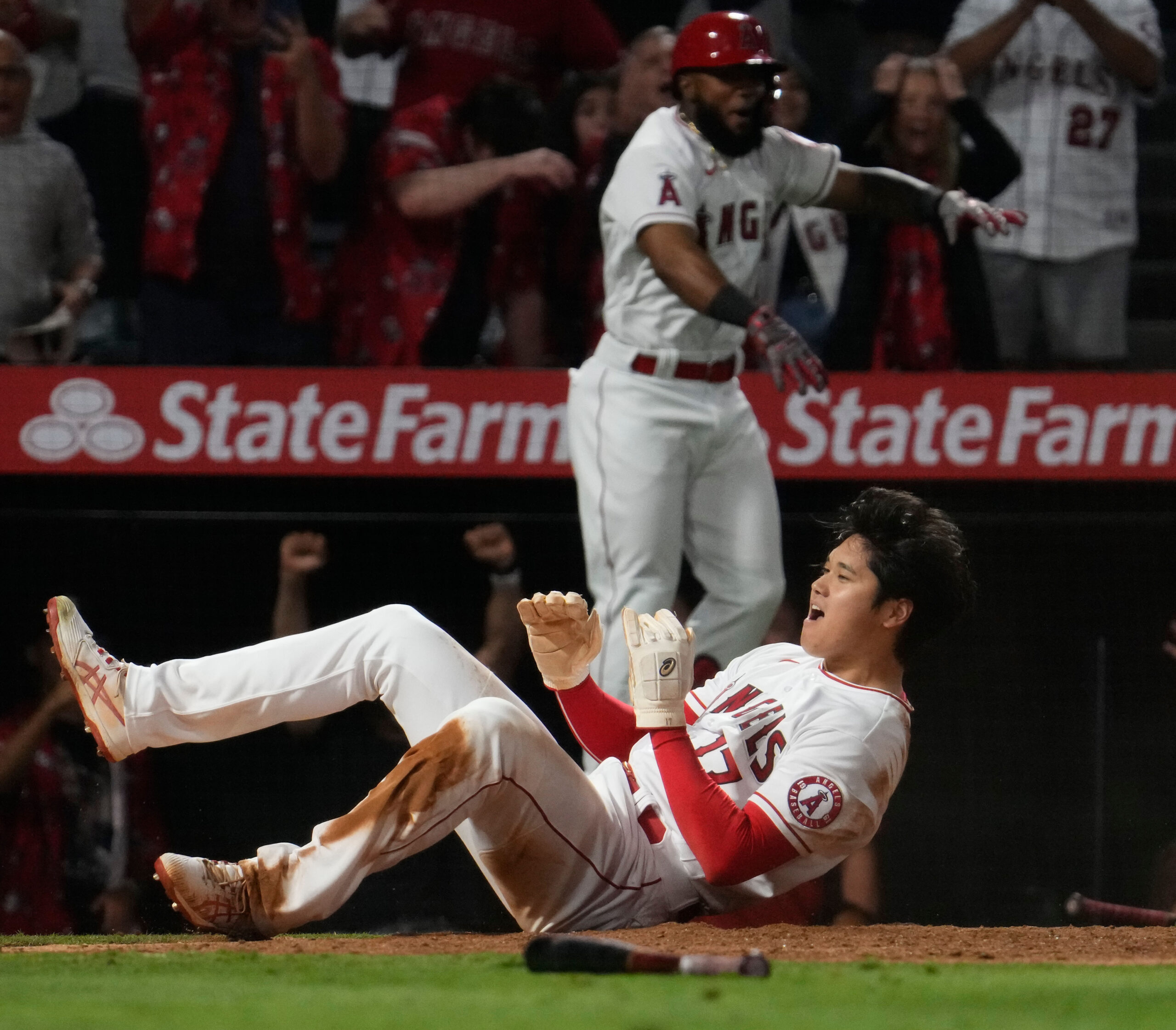 Brandon Hyde got his first look at the 2021 version of Shohei Ohtani, and while Hyde and the Orioles won’t have to face him on the mound, they’ll still have to see him bat and run, and that was enough for them.

On Friday night, Ohtani hit two home runs and scored the winning run in the bottom of the ninth as the Los Angeles Angels ended the Orioles’ three-game winning streak, 8-7.

“He pretty much single-handedly beat us,” Hyde said. “He’s such a good player. I don’t know what to say. The hottest hitter on the planet right now.”

Earlier in the day, Ohtani was named the American League Player of the Month for June.

“It’s not just driving the ball for base hits,” Hyde said. “It’s deep home runs. You walk him, he’s going to steal second on you. It’s plus-plus speed, plus-plus power, and he’s locked in. It’s extremely challenging to face him. Best player on the planet.”

Paul Fry (2-3) walked Ohtani with one out in the ninth with the score tied at 7. After Anthony Rendon struck out, Ohtani stole second. Jared Walsh hit a 109-mph single to right, and Ohtani beat Ryan McKenna’s accurate throw home with the winning run.

Trey Mancini, who will participate in the Home Run Derby on July 12, hit a 451-foot home run in the top of the first, his 15th of the year. Domingo Leyba hit his first major league home run in the second for a 2-0 Orioles lead.

Former Oriole José Iglesias hit his seventh home run of the season against Keegan Akin in the bottom of the second to tie the score at 2.

The Orioles (27-55) scored four runs in the third against Griffin Canning. Anthony Santander had a three-run double to right, and Pedro Severino had a run-scoring double to give them a 6-2 lead.

“We scored six runs in the first three innings,” Hyde said. “We swung the bat extremely well early. Iglesias, I’ve seen him for years, and it’s 98 with a nasty slider. Once he came in, that was going to be challenging. We took good at-bats for the majority of the game and scored seven runs. More times than not, you win.”

Ohtani hit his 29th home run to lead off the bottom of the third against Keegan Akin.

“It was tough, especially a guy of that caliber and the hot streak he’s on right now,” Akin said. “You’ve got to execute your pitches. The theme of the night, I didn’t execute my pitches when I needed to, and I left too many over the plate.”

Akin, a left-hander  facing the left-handed hitting Ohtani, could only shake his head when the two-way marvel turned on Akin’s pitch for a homer.

“The guy’s a different breed, and he’s doing really well right now,” Akin said “It feels like whatever you throw him, you can’t get him out, really.”

Max Stassi’s RBI single cut the lead to 6-4 after three.

“Right now, I feel like I’m throwing too good of strikes or too good of pitches in counts where I shouldn’t be,” Akin said.

Akin allowed four runs on seven hits in three innings, walking one and striking out three. He threw 64 pitches.

Austin Hays’ double scored Cedric Mullins to tie the score at 7-7 in the sixth.

Tate was followed by Spenser Watkins, who pitched a scoreless inning in his major league debut. He’s the 45th player used by the Orioles this season.

The Tides had just three singles.

Baumann struck out six and walked one.

Adley Rutschman, who played first base, doubled twice and drove in three.

Third baseman Gunnar Henderson was hitless in four at-bats and is 1-for-27 (.037) since joining the IronBirds.

Designated hitter Rylan Bannon, who’s on a rehab assignment after missing time because of an oblique strain, was 0-for-4, striking out three times.

Shane Davis and Ryan Watson combined on a three-hitter as Low-A Delmarva beat Lynchburg, 8-0, for the Shorebirds’ eighth straight win.