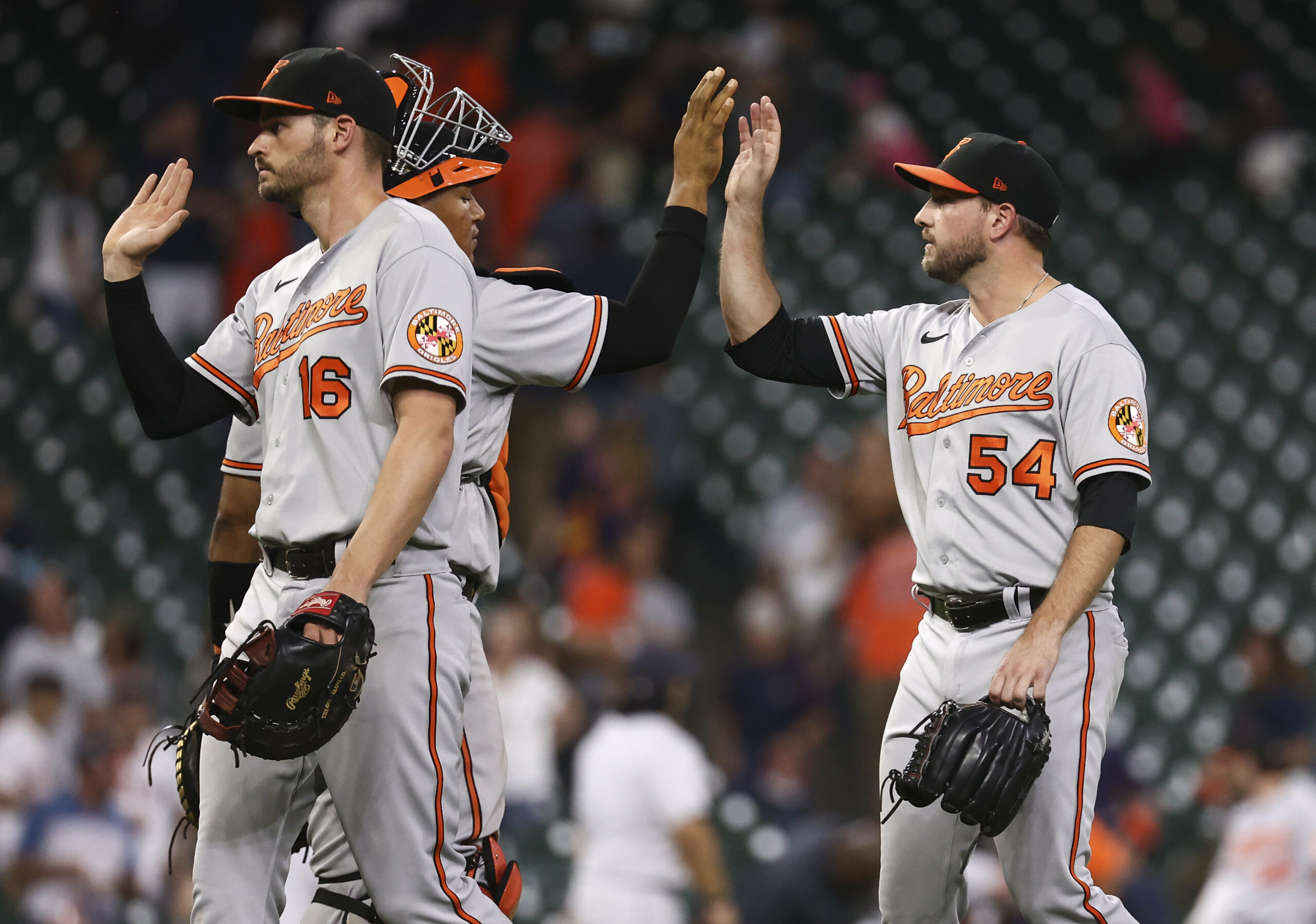 A four-run first and superb work by the bullpen carried the Orioles to a 5-2 win over the Houston Astros at Minute Made Park on Wednesday night and an unlikely three-game sweep. A week ago, the Astros had outscored the Orioles 26-3 in three games at Camden Yards.

It was the Orioles’ first three-game winning streak since June 1-4, and their third of the season. It was their first series sweep since they began the season with three straight wins at Boston on April 2-4.

“I thought our at-bats were competitive for three games,” manager Brandon Hyde said. “I thought we played solid defense. We made pitches when we needed to. We walked too many guys the first couple of games … We did a lot of things well this series.

The Orioles scored four runs in the first inning against Luis Garcia (6-5).

Matt Harvey retired the first 10 Houston (48-33) batters but gave up two runs on four singles in the fourth.

He didn’t make it out of the fifth. After consecutive walks to Jason Castro and José Altuve, Tanner Scott relieved him and struck out Michael Brantley and retired Yuli Gurriel on a popup.

Harvey allowed two runs on four hits in 4 1/3 innings. Though he pitched well, he hasn’t registered a win in his last 11 starts, dating back to May 1st.

“The last two years have been such a struggle,” Harvey said. “Going through a full season and getting a start every fifth day, there’s a little bit of a learning curve that I unfortunately have to go through. Luckily right before the break, I’m able to put a couple of decent starts together.”

Scott (3-3) struck out the side in the sixth. He was coming off a three-walk outing when he couldn’t command his pitches.

“You see what Tanner can be,” Hyde said. “I mean, he punched out four. They had no chance. It’s electric stuff, and it’s all about strikes. So, when he’s throwing strikes, an upper-90s fastball with a slide-step delivery and a sharp slider, he’s extremely hard to hit. That’s what it was tonight.”

Paul Fry and Cole Sulser were strong, too. Fry recorded four outs, and Cole Sulser got the final two outs in the eighth and three in the ninth for his third save. Scott, Fry and Sulser combined to allow just one hit in 4 2/3 innings.

“Those guys just did a great job,” Hyde said. “I was really pleased with how the three bullpen guys threw.”

“We need to do a better job to do everything we can to strand runners when we come in,” Sulser said. “Make it as clean as possible, not give away free passes. I think if we continue to do that, make the other team put it in play…I think we’ll continue to see good results and improvement in the bullpen, and hopefully we can keep rolling with that.”

Austin Hays hit his eighth home run in the eighth, and the Orioles led, 5-2.

On the final play of the game, Franco suffered an ankle injury when he was chasing Robel Garcia’s pop fly in foul territory. Leftfielder Ryan McKenna made the catch to end the game, but Franco stayed on the field long after his teammates exchanged handshakes. Finally, Franco, accompanied by Hyde and assistant athletic trainer Patrick Wesley, walked gingerly off the field.

“He’s going to get a precautionary X-ray on his ankle right now,” Hyde said. “He sprained his ankle. We’ll see the severity of it. I was encouraged how he walked off. It scared him at first. It sounded like he rolled it pretty good. We’ll know more tomorrow.”

The Orioles also should know more about reliever Hunter Harvey’s right shoulder. Harvey was warming up in the seventh and stopped abruptly because of discomfort in the shoulder.

Blaine Knight allowed a run on two hits in 5 2/3 innings in Double-A Bowie’s 2-0 loss to Akron. The Baysox had eight hits, two by designated hitter Adley Rutschman, who’s hitting .291 with a .947 OPS.

Shortstop Gunnar Henderson had his first hit for High-A Aberdeen in the IronBird’s 7-6 loss to Brooklyn in the second game of a doubleheader. Henderson also had his first RBI. He’s 1-for-21 (.048).

Brandon Young (3-0) allowed a run on six hits, striking out six and walking one in five innings.

Shortstop Darell Hernaiz and first baseman TT Bowens homered to lead Delmarva to a 3-0 win in the second game.

Call for Questions: I’ll be answering Orioles questions on Friday, so if you have any, please put them in the comment box or email them to: [email protected]