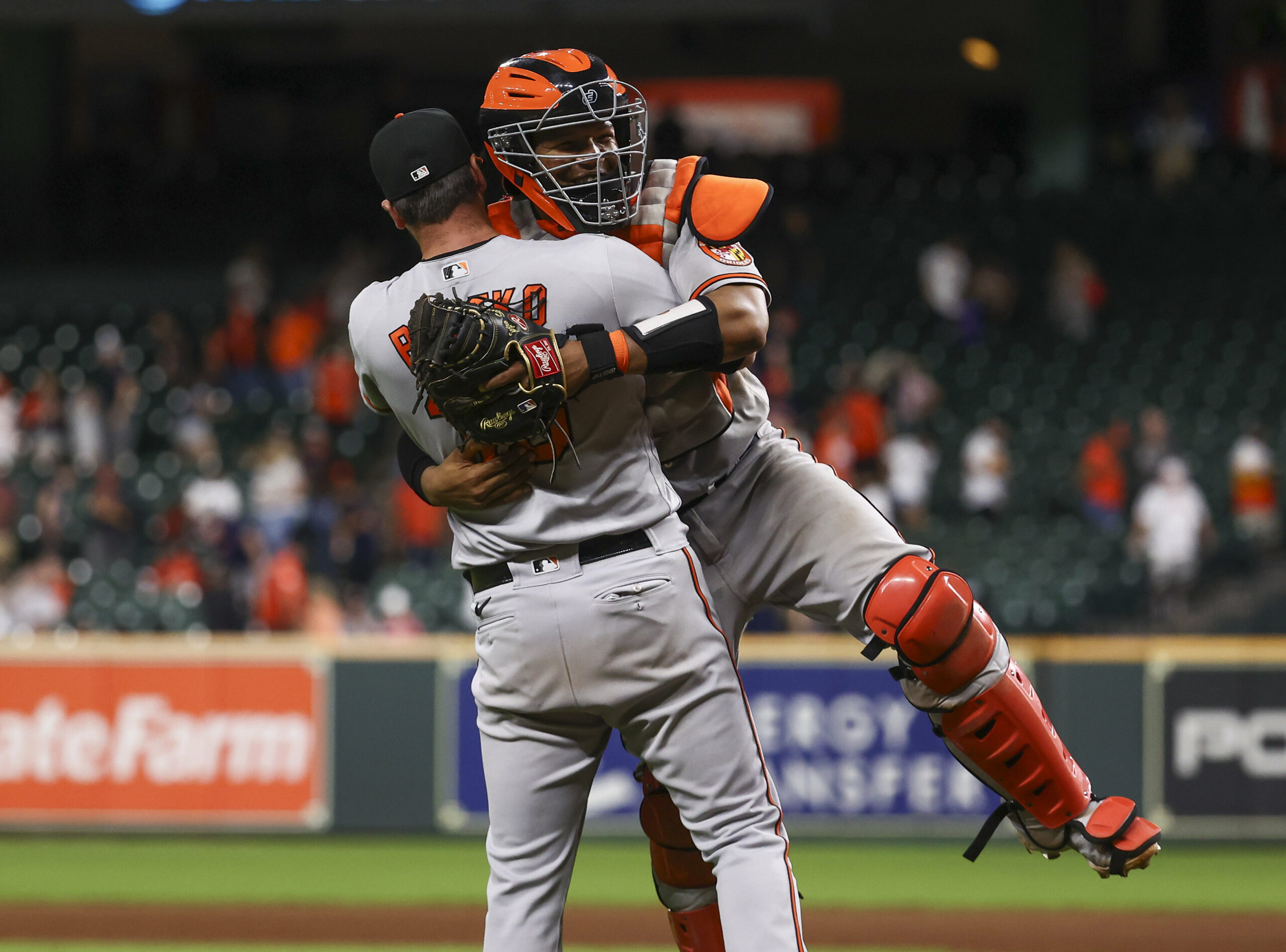 Austin Hays’ clutch hitting and strong play in right field overcame a season-high, 10-walk night for Oriole pitchers. Hays’ two-run home run broke a 4-4 ninth-inning tie and started a five-run inning to lead the Orioles to a 9-7 win over the Houston Astros at Minute Maid Park on Monday night.

Cedric Mullins led off the ninth with a single, his third hit of the game, against Brandon Bielak (3-2). Hays homered to left, his seventh, and also his third hit. The Orioles had 15 hits.

“There’s nothing more fun as a position player than when the offense is rolling,” Hays said. “That’s what we’ve been missing. We’ve been in a lot of games and we’ve gotten a lot of guys on base. We just haven’t been able to get that big hit when we need to.”

After Trey Mancini struck out, Ryan Mountcastle walked, and Ryan McKenna singled. Mountcastle and McKenna scored on a double by Pedro Severino.  A double by Ramón Urías’ scored Severino.

Hays says he’s over the aftereffects of his hamstring injuries.

Paul Fry (2-2) pitched a perfect eighth but allowed two runs in the ninth. Adam Plutko got the last two outs for his first save, though he issued the 10th walk.

“That’s not the recipe to win against the Houston Astros or any other major league team,” manager Brandon Hyde said.

Hays singled with two outs in the third against Zack Greinke. Mancini, who was hitless in his last 14 at-bats, singled, and Mountcastle followed with a single to center that scored Hays.

Thomas Eshelman gave up no runs in the first three innings. Hays made a leaping catch in right field to take away a home run from Kyle Tucker in the second.

“The ball was hit so high. I was waiting at the wall for such a long time,” Hays said. “That’s why it looked so nonchalant. It wasn’t very far over the fence, and I didn’t have to jump too high.”

In the fourth, Yordan Alvarez walked and moved to third on Carlos Correa’s single. Alvarez scored on Tucker’s sacrifice fly to center.

Eshelman gave up two runs on five hits in 3 2/3 innings. He walked three and didn’t strike out a batter.

Mullins led off the fifth with a single to right, stole second and took third on a throwing error by Astros catcher Martin Maldonado. With two outs, Mountcastle hit his 14th home run, and the Orioles (25-54) took a 3-2 lead.

Greinke, who limited the Orioles to a run on five hits in 7 1/3 innings on June 22 in Baltimore, gave up three runs on eight hits in five innings.

Sulser recorded five outs but walked three and left with runners on first and second with two out. Hunter Harvey retired the last two batters of the sixth.

Hays singled with one out in the seventh against Blake Taylor. Mancini blooped a single and Mountcastle walked. McKenna hit into a force play, and Hays scored as McKenna beat the throw to the plate. That gave the Orioles a 4-2 lead.

“Keeping Austin Hays healthy and on the field is extremely important,” Hyde said. “He’s still not 100 percent. He’s playing banged up. He’s not moving quite the same. Hopefully, he can be at full strength in the second half. He’s an exciting player and got a lot of tools, and we need him.”

Houston tied it in the bottom of he seventh. Michael Brantley led off with a single and, after Harvey walked Yuli Gurriel, Tanner Scott struck out Alvarez, but walked Correa to load the bases. He then walked Kyle Tucker and Myles Straw to force home two runs and tie the score, 4-4.

Hyde replaced Scott with Tyler Wells, who struck out Robel Garcia looking and Maldonado. Wells bumped his fist after striking out two to get the Orioles out of the jam.

In the ninth, Correa was hit by a pitch with one out. Tucker singled, and pinch-runner Abraham Toro took second. Straw’s single scored Toro, and Garcia’s single scored Tucker to make it 9-6.

“Any win right now is big for our team,” Hyde said. “I’m happy we won. I wish we wouldn’t have made it so interesting at the end.”

Notes: Domingo Leyba, who had been hitless in his first 27 at-bats in the major leagues this season, singled in the fourth inning. … The time of the game was four hours, 19 minutes, longest of the season. … Hyde hasn’t decided on Tuesday’s starter.

Call for questions: Later this week, I’ll be answering your Orioles questions. Please leave them in the comment box or email them to: [email protected]