Orioles lose for 16th time in 18 games, go 1-for-10 with runners in scoring position; López loses his 10th - BaltimoreBaseball.com 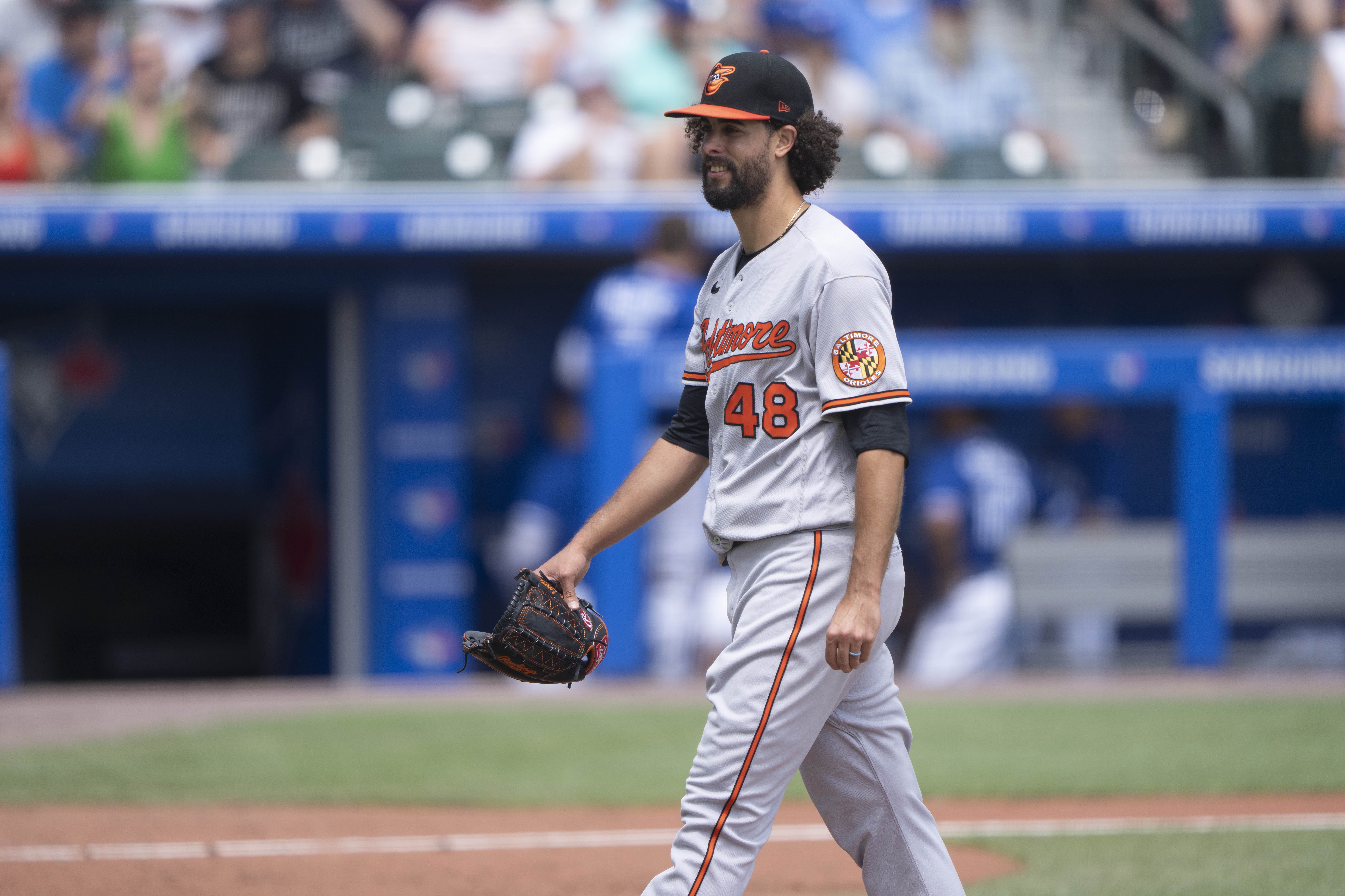 With this patchwork lineup, the Orioles were 1-for-10 with runners in scoring position and lost for the third time in four games to the Toronto Blue Jays at Sahlen Field in Buffalo, 5-2.

It was Mountcastle’s seventh home run in June. At the beginning of the month, his average was .226. It’s now .264.

“It’s been a little rough patch here,” Mountcastle said in an understatement. “It feels good, trying to get some good pitches to hit, and I’m pretty good with that.”

Toronto (40-36) tied it at 1 in the second when Teoscar Hernández scored on Randal Grichuk’s double play.

Vladimir Guerrero Jr., who homered in the first three games of the series, hit a two-run double to put the Blue Jays ahead 3-1 in the third.

Urías hit an RBI double in the fifth to cut the lead to 3-2, but the Orioles could have had more. Austin Wynns grounded out to first, and McKenna had an infield single. Anthony Santander was called out on strikes, and Mountcastle grounded into a force play.

Cavan Biggio’s two-run double in the bottom of the fifth gave Toronto a 5-2 lead.

“Only giving up five runs with the way the wind was, blowing straight out to left field, you expect this would be more of a high-scoring game,” Hyde said.

“Every day is a hard day to pitch,” López said. “Today, you’ve got a lot of wind. Today, I was taking more time on every pitch.”

“That hurt him,” Hyde said. “He did his best to keep us in it, trying to push some of our starters to go a little deeper because we need to survive this. Our bullpen guys helped out. He just couldn’t quite get through five today.”

In the sixth, DJ Stewart and Austin Hays began the inning with singles. Hays’ single hit off the left-field wall, but he was unable to make it to second. Patrick Murphy replaced Stripling, who worked five-plus innings, allowing two runs on six hits.

Leyba struck out and Maikel Franco hit into a double play.

In the seventh, Wynns and McKenna singled with one out. Both runners moved up on Santander’s grounder to third. Mountcastle walked to load the bases and, with left-hander Tim Mayza on the mound, Mancini pinch-hit for Stewart. He tapped the ball back to Mayza to end the inning.

“We didn’t get the big hit today,” Hyde said, something he has had to say often. “I thought we took some good at-bats … We did have opportunities. We didn’t cash in.”

Anthony Castro struck out Hays, Leyba and Franco in the eighth. Jordan Romano pitched a spotless ninth for his sixth save. Mullins pinch hit for Wynns, and he popped out for the second out in the ninth.

Dillon Tate pitched the seventh and eighth and retired all six batters he faced, striking out five. It was the Orioles’ most impressive performance of the day.

“A lot of really bad swings,” Hyde said. “Worked ahead in the count. His pitches were down in the strike zone.”

Notes: Mickey Jannis, the knuckleball pitcher who was designated for assignment on Friday, has cleared waivers and been assigned outright to Triple-A Norfolk. … The Orioles begin a three-game series in Houston on Monday night. Thomas Eshelman (0-1, 7.27 ERA) will face Zack Greinke (8-2, 3.56). The Orioles haven’t decided on a pitcher for Tuesday night. Houston has scheduled José Urquidy (6-3, 3.32). On Wednesday, Matt Harvey (3-9, 7.54) will face Luis Garcia (6-4, 2.83).

Mullins an All-Star finalist: Cedric Mullins finished seventh in voting among American League outfielders in the first phase of voting for the All-Star Game. The first nine outfielders advance to the second phase of voting, which begins Monday at noon and runs until Thursday at 4 p.m.

Trey Mancini, who will participate in the home run derby on July 12th at Denver’s Coors Field, was sixth in voting for first basemen, and Freddy Galvis finished 10th among shortstops.

Third baseman Patrick Dorrian had three hits, drove in three runs on a two-run homer and a double to lead Double-A Bowie over New Hampshire, 8-2

Gunnar Henderson continues to look for his first hit with High-A Aberdeen. Since his promotion from Delmarva on Tuesday, Henderson who played third in the IronBirds’ 8-4 loss to Rome is 0-for-14.

The Orioles’ two teams in the new Complex League, which was formerly known as the Gulf Coast League, begin play on Monday. Both are based at the Ed Smith Stadium complex in Sarasota. The affiliated teams are off on Monday.

Call for questions: I’ll be answering Orioles questions later this week. Please leave your questions in the comments below or email them: [email protected].