Jim Henneman is still the most interesting man in the Orioles' press box - BaltimoreBaseball.com 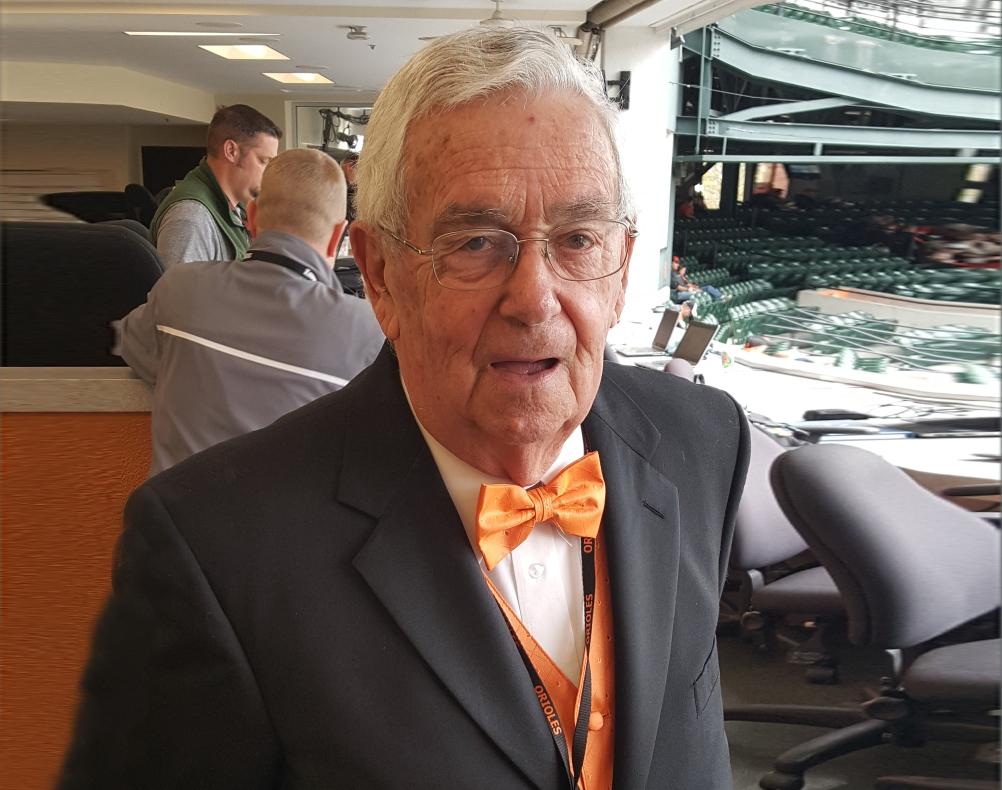 The most interesting man in the press box fingered the Orioles’ giveaway cap. “I bet I’m the only one in here who saw them play,” he said. Jim Henneman was holding the Baltimore Elite (pronounced E-Light) Giants cap that the Orioles gave away last weekend.

As a youngster, Henneman rode his bicycle to watch the Negro League team play at Bugle Field, which was on the corner of Federal Street and Edison Highway. The baseball-crazed Henneman, who grew up 3 ½ blocks from Memorial Stadium, wanted to watch some baseball when the Orioles—the International League version–were out of town.

Henneman, now 85, is a regular presence in the Oriole Park at Camden Yards press box again after missing 2020 because of the pandemic, a hip replacement and multiple abdominal surgeries.

That ended his streak of watching Oriole games that stretches back even before Memorial Stadium.

A man of many talents, who for years showed up on Opening Day wearing his signature tuxedo with orange vest and bowtie, spent 2021’s opener watching from the stands instead of the press box.

Besides being a certified baseball expert, Henneman, who pitched against Al Kaline in high school and coached amateur teams that played at Ebbets Field and the Polo Grounds, can also cook a tasty crab cake. The secret, he’s always said, is to use club cracker and mustard instead of mayonnaise.

“I was into it from an early age, and it has never really left me,” he said.

Not only does he watch Orioles games he doesn’t attend on television but watches the Nationals and subscribes to both the MLB.TV and MiLB. TV packages for his computer.

“There’s so much more available. That’s the good news and the bad news, maybe,” he said.

It’s conceded that Henneman has watched more Oriole games than anyone else, though he offers that the former longtime trainer of the team, Richie Bancells, may have seen nearly as many. He estimates he’s seen somewhere between 5,000 and 6,000 games as a fan, writer and official scorer.

Henneman was the principal official scorer at Oriole games from 1997-2019. Before that he was a writer for all three Baltimore daily newspapers, The News American, The Evening Sun, both of which no longer exist, and The Sun before leaving newspapers in 1995.

On April 15, 1954, Henneman, a Calvert Hall graduate, was getting ready to attend Loyola College and working as a clerk for the Baltimore City Police Department. He arranged for the day off to attend the city’s welcoming parade for the Orioles, who had taken a train from Detroit to Camden Station and, dressed in full uniform, rode up Charles Street for a welcoming parade.

He was one of 46,354 who watched as the Orioles beat the Chicago White Sox, 3-1. Clint Courtney and Vern Stephens hit home runs. Six days later, Henneman went to the first Orioles home night game. Bob Turley took a no-hitter into the ninth inning before Larry Doby hit a two-run home run to beat the Orioles.

In 1944, six days before his 9th birthday, Henneman was devastated when he found out that Oriole Park, which was not far from his home on Greenmount Avenue and 29th Street, had burned to the ground.

The minor league Orioles needed a new home. “They basically moved into my backyard. I spent a lot of time in my backyard in the years to come,” he said.

When Henneman was attending Loyola, he contracted rheumatic fever during his senior year, and was forced to withdraw. Through mutual friends, he met legendary News American sports editor John Steadman, who hired Henneman as a copy boy for $1 an hour.

“The whole idea was it was going to be a fill-in, and I’d go back to repeat my senior year,” Henneman said.

“Openings developed on the staff, and I could take it if I wanted,” he said. “I thought it through and thought, ‘I’m in a pretty good place in an area that I had a lot of interest in anyhow,’ so I stayed. I never did finish my degree, which I’ve always regretted … It worked out OK.”

Henneman began by covering college football, basketball and lacrosse. When the NBA’s Chicago Zephyrs moved to Baltimore, he covered the newly named Bullets.

By that time, he’d done some baseball, stringing games for United Press International in 1959. “Five bucks a game. That was found money.” He also covered Roger Maris’ chase of Babe Ruth’s home run record in 1961.

“As hectic as it was in those days, it was nowhere near the kind of coverage that a normal series would get today,” he said. “It wasn’t so crowded that you couldn’t get within 15 feet of somebody. You were right next to them all the time.”

The next year, the All-Star Game came to the new D.C. Stadium. Henneman was in the National League clubhouse when Stan Musial walked over to President John F. Kennedy.

“He poked him in the chest and said, ‘They said you were too young to be president, and I was too old to play baseball. We showed them.’ I was within handshaking distance of both of them.”

By then, Henneman was The News American’s backup Oriole writer. In 1968, he accepted an offer to become the Bullets’ public relations director.

Those were great days for sports in Baltimore. The Orioles played in four World Series, the Colts in two Super Bowls, and the Bullets of Earl Monroe and Wes Unseld made it to the NBA finals.

Henneman, who got a sizable pay increase to work in PR, enjoyed his time with the Bullets.

“That five-year investment was worth getting to know Unseld as a person,” Henneman said. “He was a terrific human being. I had great rapport with him because we worked pretty closely together, me doing PR and him doing a lot of appearances for us. He was great in that regard. I got to know him and know what kind of person he was, and that’s one of the great rewards of my career.”

When the Bullets left Baltimore for Landover, Henneman returned to The News American as the Orioles’ beat writer “at a hefty pay cut, I might add. It was worth it.”

He ended up covering the Orioles for The News American before leaving for The Evening Sun in 1980 and The Sun until 1995.

Covering teams is far different than it was in Henneman’s time.

“It’s a completely different business today than when I did it,” Henneman said. “I’m not sure I could deal with it the way you guys deal with it today.

Henneman left newspapers around the time the Ravens came to town, and he did some Colts coverage. He was the ghostwriter for columns from former Colts Artie Donovan and Buddy Young as well as for the Colts’ star of home games.

“I would have three bylines a week. None of them were under my name,” he said.

Henneman is credited with the coining the “reverse lock.” That’s when a team that’s heavily favored is a lock to lose.

In 1987, former Oriole Dennis Martinez had just returned to the majors with the Montreal Expos, and he faced the acclaimed Dwight Gooden and the reigning World Series champion New York Mets. Martinez shut out Gooden and the Mets on three hits.

“There are a lot of things that you get to reflect back on. People that are old enough to be my kids or grandkids, they ask you. When I look at it from that standpoint, it’s neat to be able to go back and maybe answer a question that somebody else wouldn’t be able to answer because you’ve been around long enough.

“Sooner or later, there’s not going to be a time, somewhere in the not-too-distant future there won’t be somebody around who can say, ‘I was at the first game’ or ‘I was at the parade.’

“It makes you stop and think. It’s a privilege and, I don’t like to look at it that way, but it’s also a little bit of a curse, too, because you just know you’re getting older.”

Note: Orioles outfielder Anthony Santander, who’s on the 10-day injured list because of a sprained left ankle, will begin a rehab assignment at Double-A Bowie. He’ll play the outfield and be the designated hitter.