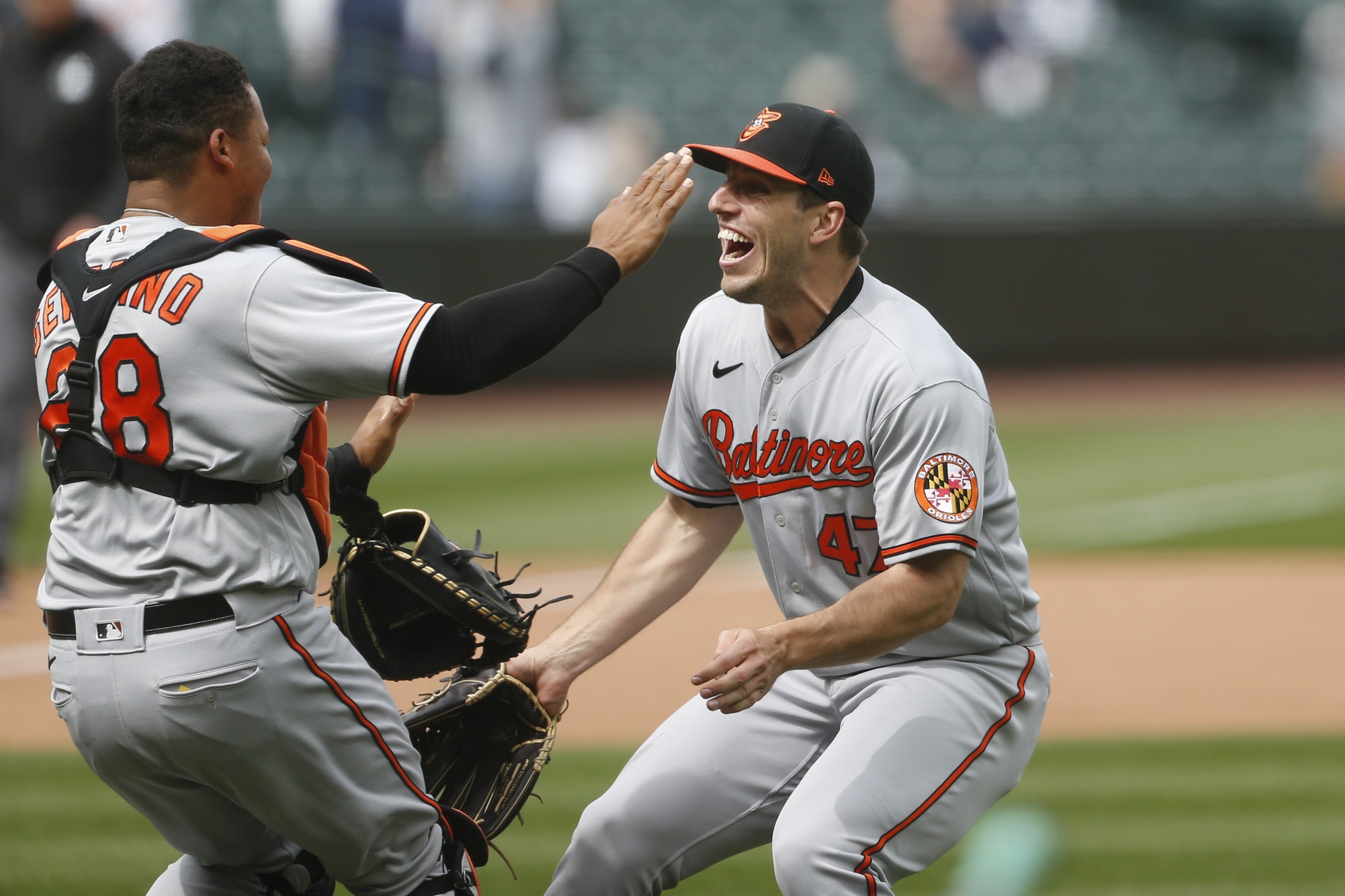 BALTIMORE—John Means’ no-hitter on May 5 against the Seattle Mariners earned him the American League’s Player of the Week award.

Means is the first Oriole pitcher to win the award since Arthur Rhodes in August 1994. He threw the Orioles’ first complete-game no-hitter since Jim Palmer on August 13, 1969. He’s attracted some attention.

“It’s been crazy,” Means said. “But it hasn’t really set in, still. I don’t think I’ll be able to look back on this until the offseason because I’m so locked in to this season and locked in to just getting ready every five days.”

Means will start on Tuesday night against the New York Mets’ Marcus Stroman at Citi Field.

“It’s cool. It really is, but I haven’t really experienced it yet,” Means said. “Mentally, emotionally, I’m just getting ready to pitch against the Mets tomorrow, maybe get a hit.”

Means was touched by the pregame ceremony honoring his achievement on Saturday night that featured a message from Palmer, who cited some of the franchise’s best starting left-handers — Dave McNally, Mike Cuellar, Mike Flanagan and Scott McGregor.

“It’s something that I didn’t really know was going to go on,” Means said. “I didn’t know that’s what came with this. Palmer’s video was pretty special to me.”

Only once in major league history has a pitcher thrown no-hitters in consecutive starts. Cincinnati’s Johnny Vander Meer recorded no-hitters on June 11 and 15, 1938.

“I was just happy that last start went well,” Means said. “It’s kind of what I strive for. I just try to have a good start every five days. I don’t look at it that it was some big milestone and that was the peak of my mountain. I try to stay as even-keel as possible, and I want to go out there and have another quality start and give my team a chance to win.”

He’s enjoying sharing what he has learned with the young pitchers.

“It’s pretty cool to be able to talk to these guys, and lead them along the way,” Means said. “Go over experiences, not that I’m really teaching these guys anything new, but just to go over mentality and everything that comes with the big leagues that isn’t pitching.

“I think there’s a lot more than people think. I think a lot of pitching is just mentality. All these guys have the stuff to be there. It’s just sticking around.”

Lowther down, Akin up: The Orioles exchanged left-handers, returning Zac Lowther to Triple-A Norfolk and recalling Keegan Akin from the Tides.

Lowther, who allowed seven runs in 2 1/3 innings in his first major league start on Saturday night, had previously pitched a scoreless inning in his debut on April 25th.

Akin, who was 1-2 with a 4.56 ERA in eight games, six starts, in 2020, had a rough spring training and didn’t make the Orioles. He started for Norfolk against Jacksonville on Friday night and allowed two runs on two hits in two innings. He struck out five and walked one.

“Akin is available out of the bullpen tonight,” manager Brandon Hyde said. “That was the reason, to have a fresh arm in here with Friday and Saturday bullpen usage. We were short yesterday, and we were waiting for Akin today.

“Akin’s available in a long relief rule out of our bullpen. Just brings us a fresh arm, going forward this week.”

Hyde said that Akin could go long in relief.

“I think he just threw OK in that two-inning start,” Hyde said. “I hope that being in the big leagues ramps up the intensity. We saw what Akin can do last year. We saw him throw a couple of outings where he threw really, really well, aggressive with his pitches in the strike zone, and that’s something we worked on in spring training where he was hit-and-miss. Now that he’s here, he’s got to be aggressive in the zone.”

Hyde said Means can serve as a guide for Lowther.

“Absolutely, that’s a conversation I had with Zac Lowther today after we sent him down. We talked about Norfolk, talked about him going down. I said, ‘A great example is John Means.’

“I like Zac’s offspeed stuff. Now, Means has got the changeup and added a couple of weapons with two different breaking balls, but the ability to throw fastballs where you want to, and to be able to get in to right-handed hitters, especially in this division, is going to be key.

“J.A. Happ did it for a lot of years on different teams. You see [Boston’s] Eduardo Rodriguez. He’s got the cutter, the cutter to both sides that he’s got great command of. Being a left-hander in this division, Meansy is a great example of how to navigate through difficult lineups with that type of stuff.”

Injury update: DJ Stewart, who was removed for a pinch-runner on Sunday because of a strained left hamstring, isn’t as sore.

“Feeling better today,” Hyde said. “Soreness has gone down a little bit. He’s a possible off the bench. I’m going to try to stay away from him altogether.”

Odds and ends: Matt Harvey will face the Mets for the first time since he left them in 2018 on Wednesday afternoon. He’ll face Tajuan Walker. Hyde said that the most likely pitchers against the Yankees this weekend are Dean Kremer, Jorge López and Means.