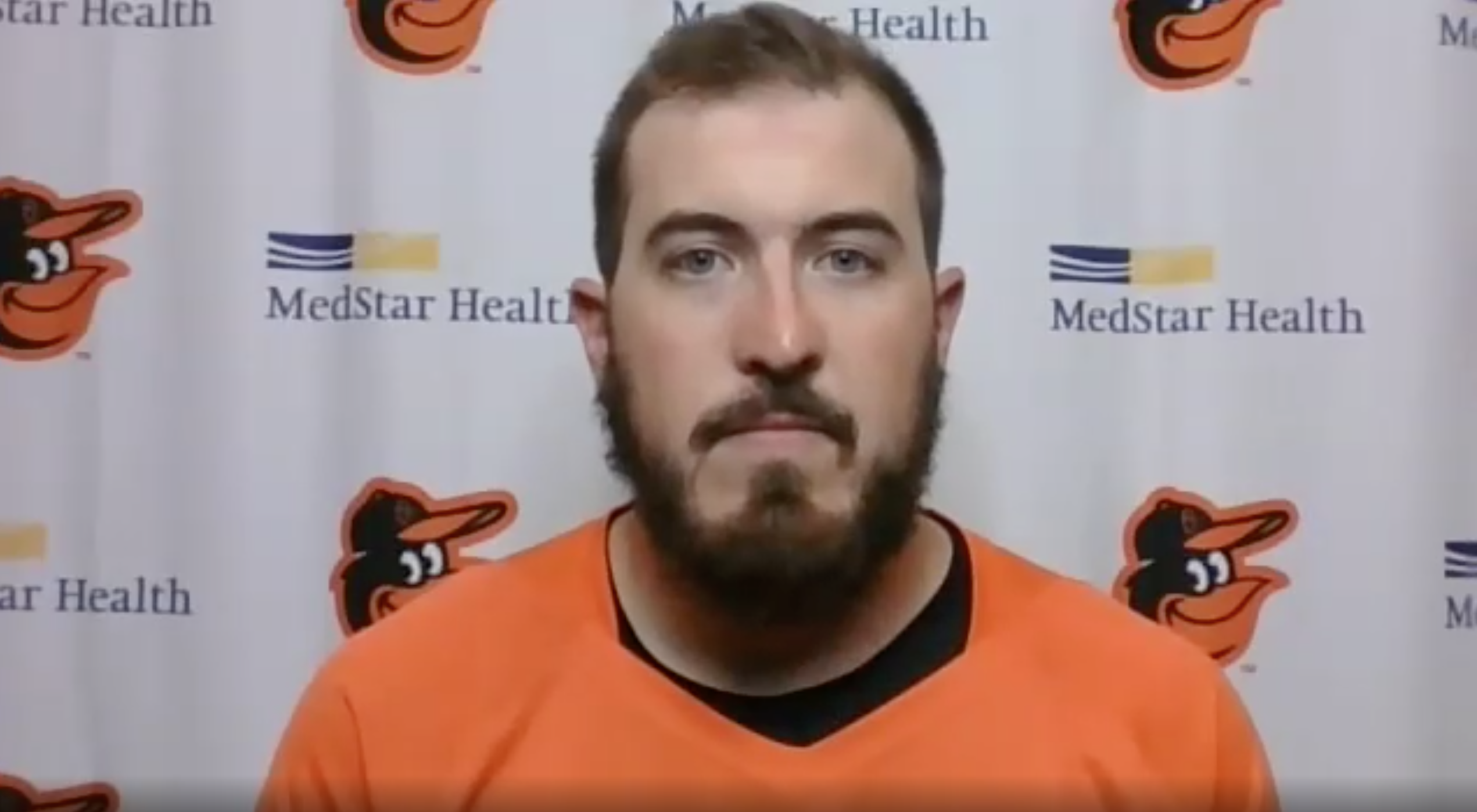 Pitcher Zac Lowther was called up to the Orioles from the alternate training site at Bowie without having pitched at Triple-A. When Lowther makes his debut for the Orioles, it will be the first time he pitches in a game that counts since September 2019 when he was with the Double-A Baysox.

“It was a little surprising,” Lowther said about the call-up. “After spring I went to Bowie at the alternate site and just kept getting my work in. I knew that it takes me a little while to get going, and being able to go down there in a more relaxed environment, get the work in, see high-level guys and get my stuff in was going to get me into a better position to get here.

“It was a little surprising how early it happened, but I’m really excited about it.”

Lowther had special company when he heard the news.

“My wife and daughter just got here yesterday,” he said. “My daughter went  to sleep at around 8. Me and my wife crashed right after the Orioles game, rolled over, put my phone down, and the ringer was on loud. I was scared about waking up my daughter.

“My wife rolls over, and says, ‘What? What happened?’ ‘Oh, I just got called up? ‘Is this a dream?’ Being able to tell her in person was really exciting. I hopped over to the bathroom to make a call to my parents and her parents. They’re all making the trip down [from Ohio]. It’s going to be really fun.”

Manager Brandon Hyde said that the 24-year-old left-hander, who was chosen in the second round of the 2017 draft, was needed in the bullpen for now.

“It was the need for somebody that can give us multiple innings,” Hyde said. “Zac being on the [40-man] roster, throwing the ball well at the alternate site, had a good spring training … even though he didn’t throw much on the main field, he did throw a lot on the back field. He threw the ball well. After the last couple of nights, we felt like we needed somebody to give us length in case we need it, and we decided to call Zac up.”

The Orioles don’t have a starter listed for Wednesday’s game against the New York Yankees. Dean Kremer is eligible to be recalled from the alternate site, where he went after his last start because the Orioles didn’t need a No. 5 starter for the short term. Perhaps,Lowther will get the start, or one in the near future.

“I think he’s a candidate to start, or be in the bullpen, so both,” Hyde said. “We’re calling him up today in case we need some length out of our bullpen.”

Lowther was 13-7 with a 2.55 ERA in 26 starts for Bowie in 2019. Last season, Lowther would have been at Triple-A Norfolk, but because of the canceled minor league season, he missed a year of competition. He was at the alternate site at Bowie late in the season.

“I think it’s a steppingstone that a lot of people need,” Lowther said. “I was ready to go on that path, no matter what. Being able to see the level of guys that I have this year and last year, it gave me a good replacement, as best as it could, to be able to compete here.”

Lowther, who started in one of the exhibition games against the Nationals’ alternate site team, would have thrown at Bowie on Sunday.

Hyde said that because of the lost minor league season, the old rules about the necessity of Triple-A don’t apply.

“Some of these guys might be getting here a little quicker than normal,” Hyde said. “We feel good about how Zac is throwing the ball at the alternate site, and we’re giving him an opportunity.”

Lowther is confident he can compete in the majors.

“I feel like I’m really ready,” Lowther said. “Being able to see the competition last year at Bowie, and this year again, and getting the outings in spring. The buildup was really good this year, knowing what to expect when you go to your second big league camp and you’re around the guys who’ve done it before, asking questions and getting a feel for how things go up here.

“When I got here today, it was like I belonged, and just being able to find my way if I can.”

To make room for Lowther on the 26-man roster, the Orioles designated left-hander Wade LeBlanc for assignment. LeBlanc started Saturday night’s game against the Oakland A’s and retired five batters but allowed four runs. He didn’t get much support from his defense.

“It was really hard,” Hyde said about his exit conversation with LeBlanc. “We like Wade a lot. He’s a pro. We talked a lot yesterday. He’s a big-time pro who was great in our clubhouse. He was one of the few veteran guys we have. It’s not easy to have that conversation with somebody like that.”

Notes: Hyde said that Chris Davis, who’s on the 60-day injured list because of a strained lower back, is “just rehabbing.” Hyde wasn’t specific about where Davis is rehabbing, but said it wasn’t in Sarasota. … Matt Harvey (1-1, 5.12ERA ) will start on Monday night against the Yankees’ Deivi Garcia, who will be making his first start of the season. Bruce Zimmermann will face Corey Kluber on Tuesday. Domingo Germán will pitch for the Yankees on Wednesday, and Jorge López will face Jordan Montgomery on Thursday afternoon.