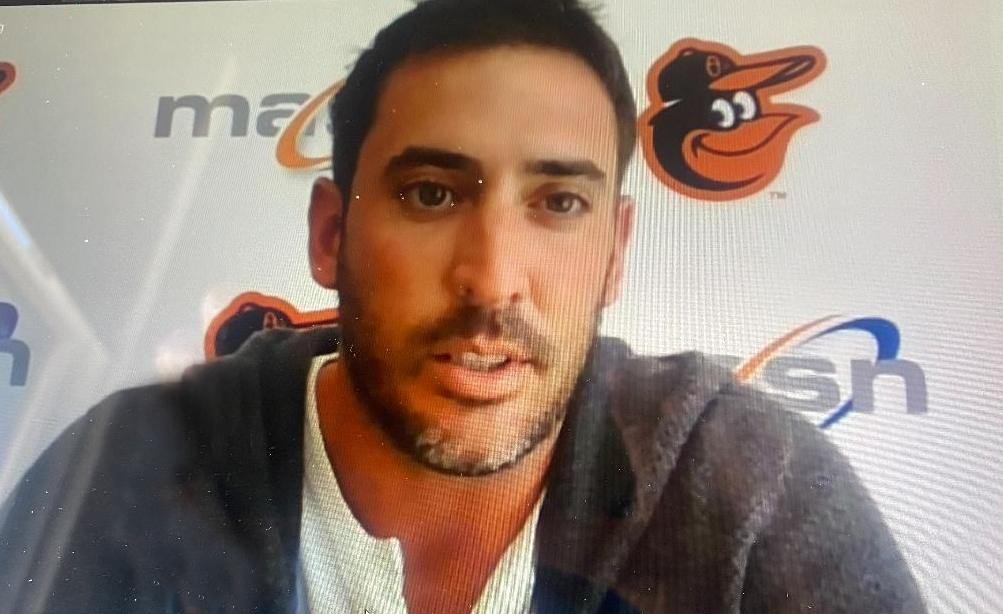 What’s happening? –Veteran right-hander Matt Harvey will make his first start for the Orioles against the Toronto Blue Jays at TD Ballpark in Dunedin, Florida on Friday. Game time is 1:07 pm. Toronto’s starter will be Hyun Jin Ryu.

Keegan Akin, who has yet to pitch this spring, is expected to follow Harvey.

Left-handed pitcher Alexander Wells, who’s been out because of a strained oblique muscle, is playing catch, manager Brandon Hyde said.

Infielder Richie Martin, who had surgery to remove the hamate bone in his left hand, is taking batting practice, and Hyde hopes he can appear in a game next week.

Freddy Galvis was scratched Thursday because of a sore hip. Ramón Urias replaced him at shortstop.

Chris Davis remains day-to-day because of a strain in his  lower back.

What happened? The Orioles defeated the Boston Red Sox, 6-3, in six innings in Sarasota.

Dean Kremer started and allowed three runs on three hits in 1 2/3 innings, walking two and striking out one. As he did with John Means on Tuesday, Hyde removed Kremer with two outs in the first. Minor league right-hander Spenser Watkins replaced him.  Kremer returned for the second.

“There were definitely some positives and some negatives, like in most cases,” Kremer said. “Specifically, I want to throw more strikes, just making sure I’m locked in mentally, more often than not would probably be the difference maker.”

Hyde thought that Kremer “had good stuff. He looked like he was searching for command today. His first outing, I think he was just off with his fastball command, searching for his offspeed stuff, also. It looked good. It wasn’t in the strike zone enough. I thought it was a better second inning than a first inning. We’ve had quite a few of those.”

“Getting a good foundation moving forward for the spring is always a good feeling,” Zimmermann said. “What made it successful was probably going with the plan we set forth, which is, the first couple of outings to really establish being in the zone, attacking the zone and trying to lock in, especially the breaking pitches early … today, I felt like I did a really good job of attacking the zone the entire time, going right at these hitters and challenging them throughout the at-bats.”

“A really good two innings,” Hyde said. “Impressed with the fastball velo. Had a lot of life to his fastball, too, gets on guys and then a lot of really good breaking balls for strikes and for chase underneath.”

Travis Lakins and Eric Hanhold each pitched a scoreless innings.

Urias hit a three-run home run in the fifth inning. The Orioles had just three hits.

What’s up with? Chris Shaw was acquired on waivers from the San Francisco Giants in November. The 6-foot-4 outfielder/first baseman was removed from the 40-man roster in January when the Orioles signed Galvis.

“Chris is somebody that we’re going to be taking a look at,” Hyde said. “A guy that was a top prospect with the Giants. He has power. He can play multiple positions, both corner outfield spots and first base … somebody when you watch take batting practice can really drive the baseball.

“Strong kid, tall left-handed bat. He’s got some big tools. We’re going to take a good look at him over the next month.”

What’s what? Thursday’s game was pure spring training. Not only did Kremer exit the game with two outs in the first and return for the second, but Boston called a premature halt to the fifth inning after Stephen Gonsalves had equaled his pitch count.

Then, with the Orioles leading 6-3, a bottom of the sixth was played so that Phillips Valdez could pitch an entire inning for the Red Sox.

What’s the word? “I do have a lot more confidence this year. I’m not saying I didn’t have any last year, but going out there knowing that I’m competing for a spot, hopefully a rotation spot, and if not, hopefully I’ll still be going north with the team.”-Zimmermann on the difference between 2020 and 2021.

What’s the number? 8. The Orioles have yet to play more than eight innings, which they played against the Pirates. The next three games games were seven innings, and Thursday’s was six.

What’s the record? 2-2-1. The Orioles will face Toronto in Dunedin. The game is not on Orioles or Blue Jays radio.

Call for questions: I’ll be answering your Orioles’ questions early next week. You can leave your questions in the comments or email them to: [email protected]