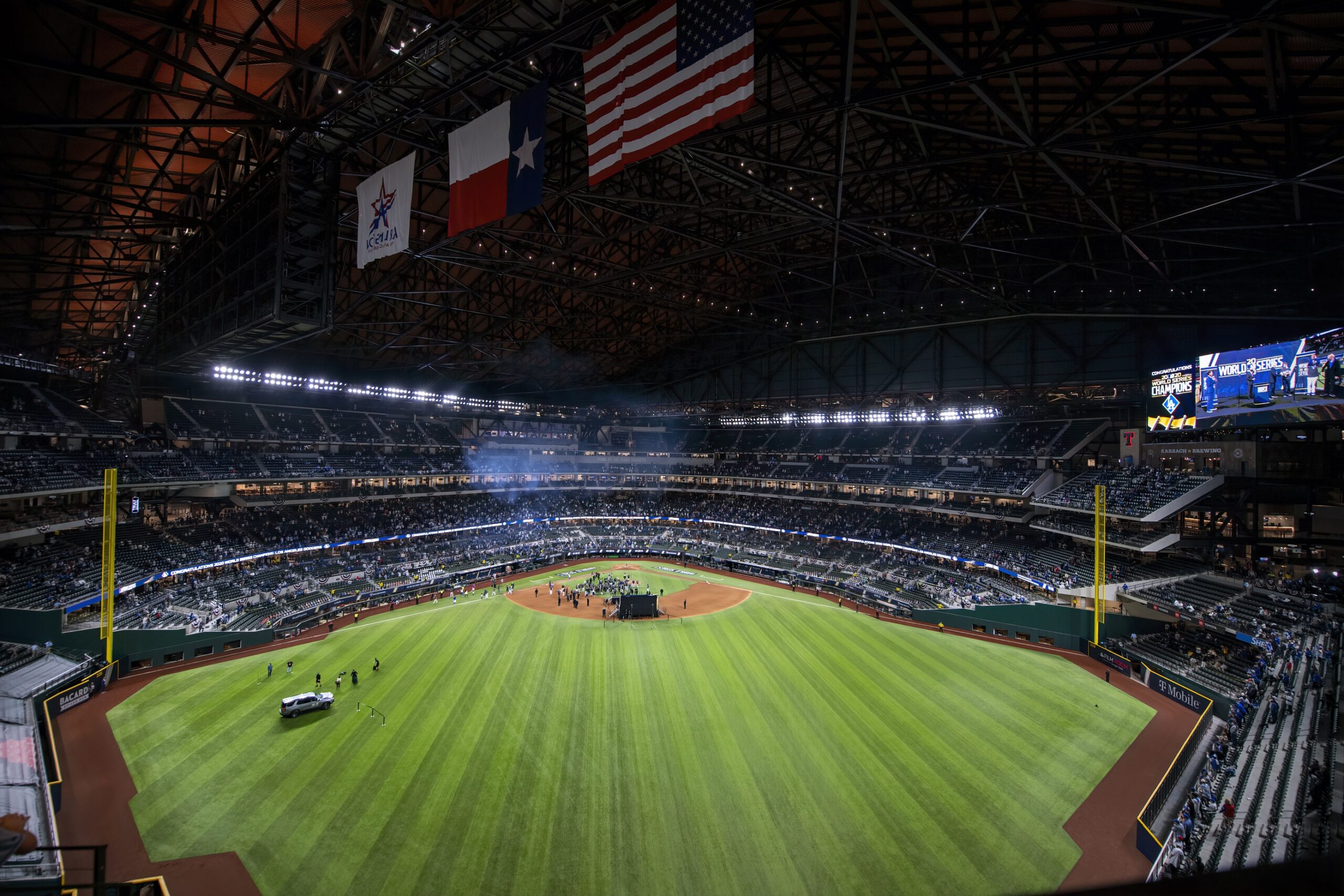 Oriole fans weren’t able to see their team play in Baltimore or anywhere else in 2020. That should change in 2021, and fans hope to see the Orioles play at home, and perhaps on the road.

Last week, we looked at Yankee Stadium. This week, we take a look at the new home of the Texas Rangers, Globe Life Park.

Globe Life Field, which replaces Globe Life Park, opened in July 2020. Because the pandemic changed the schedule, the Orioles didn’t get to play there in 2020 (they were scheduled to play there in late August). It’s the only park in the big leagues I haven’t seen.

As viewers of the National League Championship Series and World Series saw, it’s just across the street from Globe Life Park, which more than adequately served as home of the Texas Rangers for a quarter-century.

Globe Life Park is now used for football and soccer, and next year for rugby.

Arlington, Texas is located between Dallas and Fort Worth, and daily non-stop flights to either Dallas Fort-Worth International or Love Field, home to Southwest Airlines, are available.

The Dallas Cowboys’ home, AT&T Stadium, is just a short walk away from the Rangers’ home, and the new Texas Live! Entertainment complex is also there. It was still being built when the Orioles last played in Arlington in 2019.

Ticket situation: The Rangers haven’t announced single-game ticket prices, but they should be plentiful.

Orioles next visit: April 16-18. Hopefully, the 2021 season starts on time, but if it doesn’t, it would be strange for the Orioles not to play in an American League opponent’s new park for its first two years.

How do you get there? You’ll need a car in the Metroplex, which is what the locals call the Dallas/Fort Worth area. Globe Life Field is about a 25-minute drive from Love Field.

There’s plenty of parking for the ballpark.

Most memorable Orioles moment: Since the Orioles haven’t played there, none in Globe Life Field, but across the street, the Orioles won the first American League wild-card game on October 5, 2012, beating the Rangers, 5-1. Joe Saunders pitched 5 2/3 innings for the win.

What else is there to see: A trip to see the Orioles and Rangers isn’t at the top of many lists, but it should be. The Dallas/Fort Worth area has many great attractions.

Six Flags over Texas is just a few moments away from the ballpark, and it’s a popular amusement park.

For history buffs, there are two can’t-miss museums. The Sixth Floor Museum re-creates the presidency and assassination of President John F. Kennedy. It’s just above the site where President Kennedy was shot.

The George W. Bush Presidential Library and Museum is the newest of the 13 presidential libraries. Currently closed because of Covid-19, it features fascinating exhibits on 9/11 and the rest of the Bush presidency.

Where to stay: Another reason this is an underrated trip is the number of moderately priced hotels just a short drive from the ballpark. Marriott has a number of hotels in the area for under $200 a night. Some offer transportation to the ballpark.

Where to eat: Texas Live! has a number of eating and drinking establishments, including one by Cowboys Hall of Fame quarterback and Fox broadcaster Troy Aikman.

There are a number of moderately priced restaurants not far from the ballpark, including Pappadeaux Seafood Kitchen, which has excellent seafood, cajun and creole food.

It’s Texas, so barbecue is big. The best known stop is Hurtado Barbecue. Mexican food is a big favorite, too, and Taqueria Maria Bonita.

A relative living in the area introduced me to Asian Fusion at the nearby Take a Bao, and if you’re in the mood for catfish, there’s a branch of Flying Fish. Their baskets of catfish and hush puppies are outstanding.

If you’ve wanted to try In-N-Out Burger and haven’t been to Southern California, there are a number of outlets in the area. Locals will debate the merits of In-N-Out versus longtime Texas staple, Whataburger. There are Whataburgers everywhere.

My ballpark rating: Incomplete. Since I haven’t seen it, I won’t rate it. You can’t judge a ballpark by watching on TV, but I really liked Globe Life Park. The only problem with it was that afternoon games were poorly attended because of the stifling heat. Globe Life Field has a retractable roof.