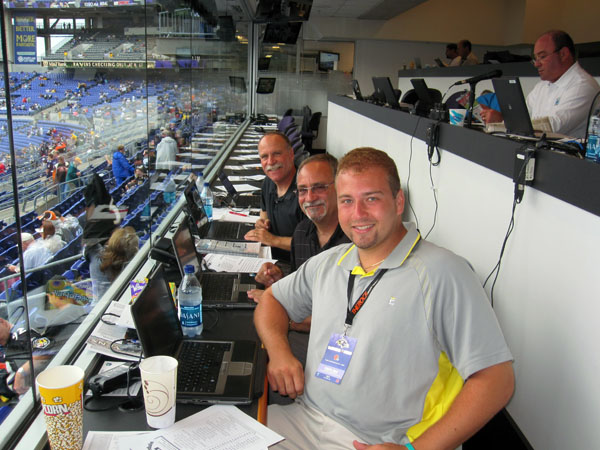 You may not know it, but you’re going to miss David Ginsburg. Everyone in sports in the Baltimore-Washington area knows Ginsburg. It’s just the fans who don’t.

For 30 years, Ginsburg has been the Baltimore sports editor for the Associated Press. That run will come to an end on February 14th.

Earlier this month, Ginsburg, a native of Silver Spring, turned 67 and decided it’s time to stop after thousands of dispatches.

Ginsburg is responsible for coverage of the Orioles, Ravens, the University of Maryland and whatever else comes along in the area. He began his career as a freshman at Maryland stringing high school games. When he graduated from College Park in 1975, he decided he wanted to be a full-time sportswriter.

Even though he was the sports editor for the Sentinel in Prince George’s County by 1980, he didn’t get a full-time job, which was an internship, until October 1983 when he started with the AP in Washington, covering general news. Later he added some sports coverage.

Since sportswriting didn’t initially pay the bills, he also worked at Giant Food for many years because that paid $200 a week. AP ended his food service career.

When Ginsburg began in D.C., the only major league team in Washington was its pro football team, and later he was also responsible for Georgetown basketball.

In 1990, he moved to Baltimore, and his responsibilities increased. Though Baltimore didn’t yet have the Ravens, Landover, where the Bullets and Capitals played, was considered part of the Baltimore bureau, and Ginsburg covered most of those games.

When the Ravens arrived in 1996, Ginsburg had to cover all four pro sports until the Wizards, who were originally the Bullets, and Capitals, moved to Washington a year later. He also had to arrange for coverage at each of Maryland’s Division 1 basketball games and tried to cover some games at Towson, UMBC, Coppin and Mount St. Mary’s.

It was a lot of responsibility and, even though the AP today covers fewer events than it used to, it’s still a substantial workload.

When the Preakness comes to Baltimore, Ginsburg is at Pimlico. When a golf tournament is in the area, he’s there. He covered the Baltimore Grand Prix for its three years.

“You have to get there early, and you have to prepare,” Ginsburg said. “I didn’t know diddly about Indy cars, so I got there early and read up on it and I utilized the PR people with questions that I couldn’t answer myself or find the information. I was just writing for the layman, and I couldn’t get technical. I wrote a story that I would want to read, and not that an expert would want to read.”

Editors who have worked with Ginsburg admire him because his clean and accurate copy that has to be written quickly.

“I still don’t know a heck of a lot about golf, but I can write it,” Ginsburg said. “You put the ball in the hole. Sometimes it matters what club they use, but they’ll tell you what they use.”

Disclosure: I’ve accepted many freelance assignments from Ginsburg over the years and have worked with him at baseball, football, basketball and hockey games.

He’s known for being calm under tight deadlines. Some years back, I was helping him at a Capitals playoff game, and a fan was standing in front of him, blocking his view. The hockey press box at Capital One Arena is located in the rafters, and it’s hard enough to see.

Ginsburg finally had enough, and told the fan to sit down. He did.

If his name is unfamiliar, it’s understandable. His byline is only occasionally included in newspaper stories and not on the most popular sports websites — Yahoo! Sports, ESPN.com and CBSsports.com, all of which rely on AP for game coverage.

While his all-time favorite assignment was Maryland’s win in the Final Four in 2002, baseball is the sport that he likes most. He’s probably covered more games at Camden Yards than any other writer, missing only a few games each year, and once or twice each season, he and his wife, Cyndy, will sit in the stands, and he loves that, too.

Sportswriting is a family business for the Ginsburgs. In the photo that accompanies this story, David is flanked by his brother, Steve, who was for many years Reuters’ sports editor, and his son, Jarren, who’s a successful corporate lawyer in Washington. He enjoyed getting to use his brother and son to assist him at a Ravens game.

“I still love the job,” he said. “I’m only stopping because there are too many other things that are in the background.”

He likes baseball so much that he volunteered to cover Nationals games each year when the Orioles were out of town. He finally got to cover a World Series when the Nationals defeated the Astros in 2019.

Ginsburg has covered three Super Bowls, hockey at the Winter Olympics in Nagano, Japan in 1998 and two Stanley Cups. He twice was named Maryland Sportswriter of the Year.

He’s not going to completely retire, but the pandemic and its restrictions have lessened his enjoyment.

“I now want to cover games when I want to cover games as opposed to having to do 75 a year,” Ginsburg said. “Some of them got to be a grind because the Orioles were sometimes very uninteresting, but the advantage was I could cover the other team, which usually had something going on.”

For years, Ginsburg and I have shared dinner with others before Orioles games. Last year, that changed. The dining room was closed, and we brought our own food.

Now, he’ll be home for dinner every night, and I hope he enjoys the next phase of his life as much as he’s enjoyed the last 30 years.

NOTE: Bob Brown, who was the longtime public relations director for the Orioles, died on Sunday at 89. Brown, who worked for the Orioles from 1957-1993, helped manager Earl Weaver prepare for games by giving him index cards with batters’ statistical performances against pitchers, long before this information was available on computers.