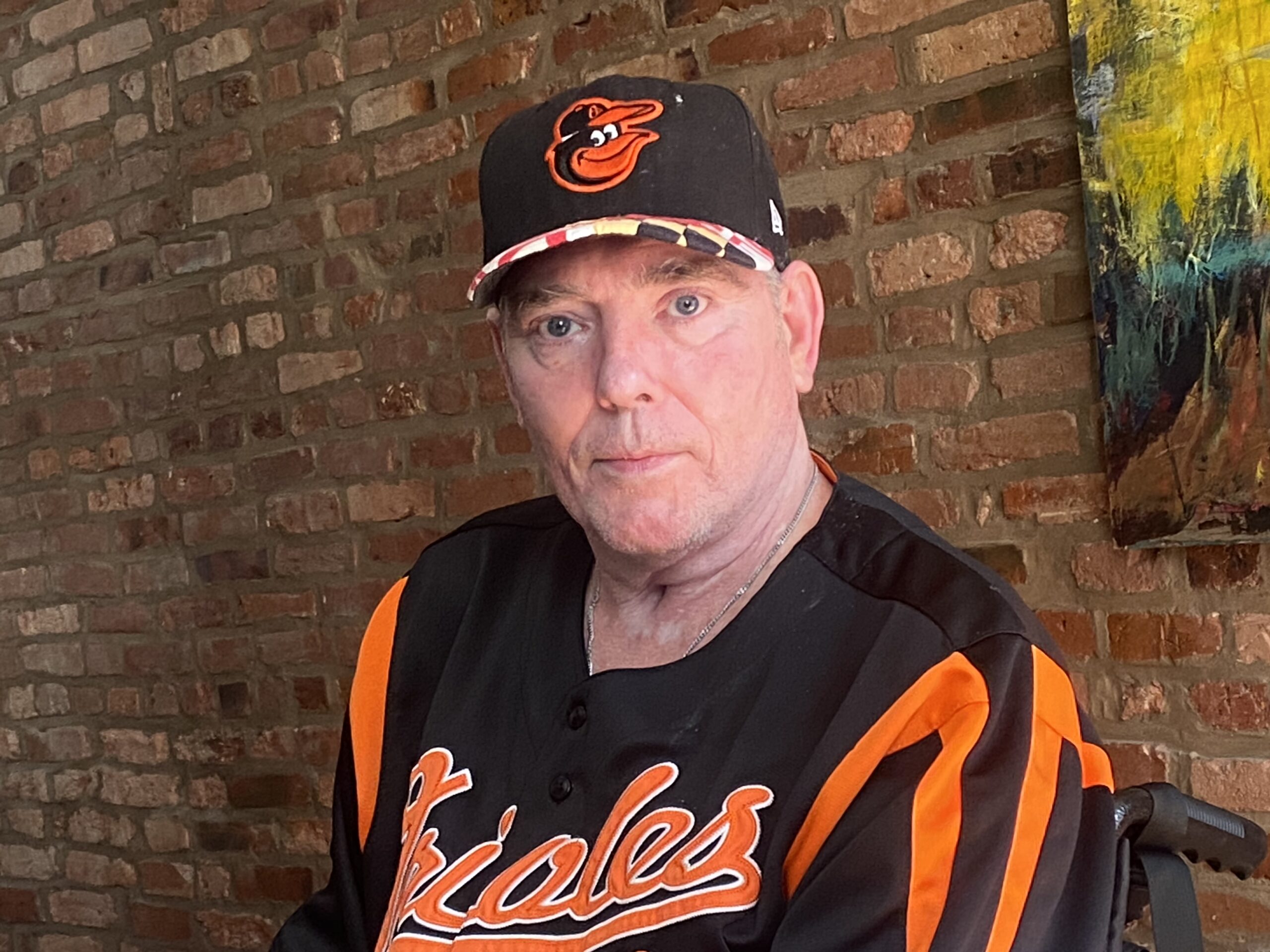 Last September 23rd, Gibbons was watching Monday Night Football at a neighbor’s house when his friend went outside and saw another neighbor’s home on fire.

Gibbons rushed outside and saw 77-year-old Mary Sterling, known in the Patterson Park neighborhood as “Miss Sandy,” waving frantically from her basement.

Sterling’s home was on fire, and Gibbons’ impulse was to help.

“I couldn’t get through the fire to get to her,” Gibbons said last week in a conversation at his rowhome. “So I went up the front stairs into the first floor, went into the basement, picked her up like a football, went back up the steps, got almost into the door to get out. There was an explosion that knocked me down.

“The next thing I know, I’m waking up 2 ½ months later at Bayview burn center ICU.”

Gibbons, who worked in facilities management at Good Samaritan Hospital, suffered burns on 70 percent of his body. Two weeks short of the one-year anniversary of the fire, he has made a miraculous recovery.

His son, Jeremiah, a Baltimore City firefighter, rushed to Bayview when he heard the news. Jeremiah Gibbons is assigned to Engine 6 in the Old Town neighborhood of Baltimore.

Coincidentally, Engine 6 was the second fire company called to the fire.

When Jeremiah got to Bayview, he said Dr. Julie Caffrey, who is the Burn Fellowship program director and specializes in plastic and reconstructive surgery, told him that his dad is “probably not going to make it.”

Pierre had just a 10 percent chance of survival, she told Jeremiah and his sister, Taylor, who plays baritone horn in the Ravens’ marching band.

In spite of all that Pierre Gibbons has been through, he is remarkably upbeat. His voice is strong, and his memory clear. Asked if he remembers anything from the time he was unconscious, Gibbons responds quickly.

“I remember a series of dreams that were scary,” he said. “I didn’t see the pearly gates. I didn’t see any of that. I saw the devil, and I spit in his eye. He didn’t like it, kicked me out, and then when I woke up, I was like …’What am I doing here?’

“But then I had a memory of it after being awake for a day or so and talking to people. It came back to me what had happened. What had happened was I had gotten burned up in the fire. It burned like 70 percent, and they did a wonderful job piecing me back together. I had all kinds of organ failure, and they just kept me alive. I’m still going for surgeries. I’ve got two on the books right now.”

When Pierre began talking with Jeremiah, he found out that Mary Sterling had died two weeks later.

“That was one of my first questions … ‘Where is Miss Sandy?’”

After nine months at Bayview, Gibbons returned to his home in late June, and he has regular intensive physical and occupational therapy. He thrives on tough therapists, and he’s assisted at home by a caring nurse, Tina.

“If I’m not using my legs, I’m not getting better,” he said. A Navy veteran, Gibbons likes it when his therapists bark at him.

“I always knew I was going to make it because I had the right people around me,” he said. “I had rehabilitation specialists who made sure I was going to get home.”

Jeremiah established a Go Fund Me for Pierre and quickly raised $50,000, which was used to retrofit his home. To avoid stairs, a first-floor bedroom with a hospital bed and an accessible bathroom was constructed.

The family is paying out of pocket for nursing care, and they’re afraid funds will soon run out.

Gibbons, a native of Hyattsville, moved to Baltimore in 2003 and has adopted the Orioles and Ravens as his teams.

Watching the Orioles is an important part of his recovery, he said.

“It allows me downtime … where I’m not thinking, worrying about things,” he said.

“Watching a game I grew up playing, I love the fact they make games close. They could be behind and somehow miraculously come back … at least they make a game of it this year.

“To sit here and watch this club rally back and be within winning distance … it’s hard to watch, but it’s still fun to watch because it’s baseball. They make it fun to watch. With these guys and this team, that’s a good ballclub.”

His favorites are Rio Ruiz and Pedro Severino. Gibbons likes Severino because he favors catchers.

He’s been an Orioles fan since the Senators left Washington in 1971. His father, who’s 84 and living in New Mexico, would take the family to Memorial Stadium.

“It was a big deal going up the road to Baltimore to see baseball,” Gibbons said. “I always remember it being hot as hell, man, sitting out there on those hot days in the sun. There was no shade. If you didn’t bring your shade with you, which was a ball cap, you just baked.

“We didn’t have a lot of money. There weren’t sodas. They didn’t have bottled water back then. If you got a cold water, it was a big deal. Dad didn’t have money, just getting tickets was a treat in itself.”

When he began working in Baltimore, Gibbons and his friends would walk over to Camden Yards after work, buy $11 outfield tickets and move to box seats.

Gibbons needs surgery to get the tendons under his arms released. He suffered two strokes in his left arm, and he’s working to get the feeling back.

His life forever changed, Gibbons is left with much time to think. One thing he doesn’t think about is if he’s a hero.

“He was presented with a situation where he couldn’t just walk away,” Jeremiah said.

“He had to act. He could have turned his back and walked away, but knowing the Pierre Gibbons that I know, and if that had happened to me or any other Gibbons I know, you’d be living with guilt for the rest of your life. I feel like that would be the same way for most people or most Americans. Your failure to act in a situation where somebody else’s life is on the line is something we take seriously as people in general, as a family.

“There’s too many things you can be mad at and point fingers, but at the end of the day, I truly believe my dad is a hero.”

Pierre has discovered lots of friends and admirers.

“I found out that the world isn’t such a bad place after all,” he said.

“There’s a lot of loving, caring, good people out there that are genuinely sincere. To this day, I’m still being helped by my neighbors. They do a meal train where they bring food and they drop it off in the cooler. Occasionally, they’ll go out and buy something, but for the most part, it’s handmade with love.”