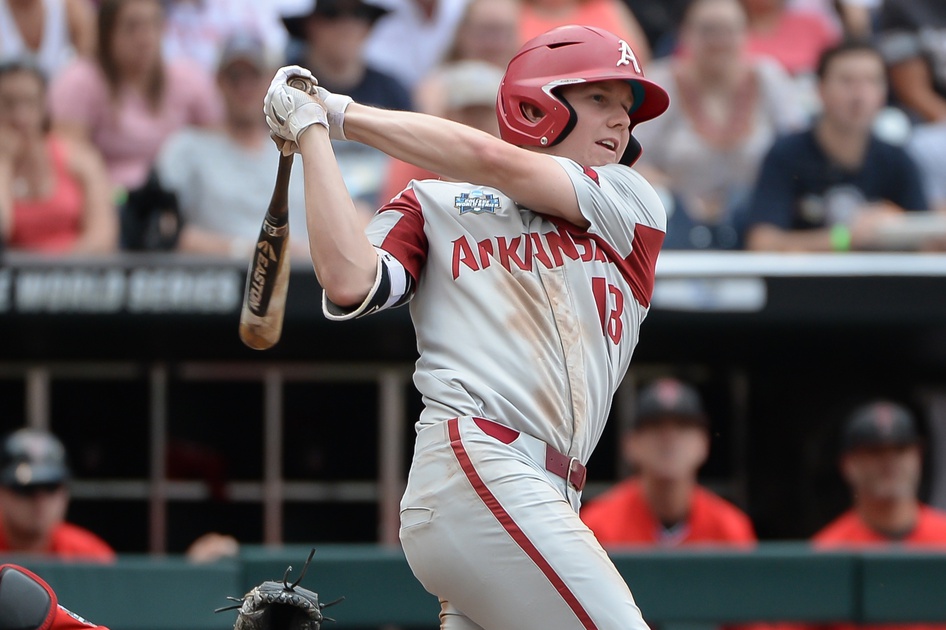 “This is a middle-of-the-order bat profile for us,” Elias said. “We feel that he’s the best left-handed hitter in the country this year. This is somebody that’s going to hit average and power and hit in the middle of our order for a long time while playing a quality right field defense.”

Elias said that he didn’t decide on picking Kjerstad until about an hour before the draft. Although the Orioles liked a pitcher, they decided to focus on position players before deciding on Kjerstad, who’s listed at 6 feet 3, 205 pounds.

He was not among the candidates that Elias met with personally, but instead had a Zoom meeting with Kjerstad during the pandemic.

“He was kind of a dark horse for us,” Elias said. “Part of it is that if I go meet with a guy like that in the wintertime who’s ranked in the middle part of the first round, that can make some waves. That’s part of the gamesmanship of the scouting process.”

Elias dismissed talk that the team selected Kjerstad because of signability. Although the Orioles could pay Kjerstad less than the $7,789,900 slotted for the second pick of the draft, and pay more than the slot amounts for the final five picks, that might be difficult. The Orioles have a pool of $13,894,300, largest in the draft.

“When you’re picking that high, you don’t want to feel like you’re not taking the guy that you want,” Elias said. “We could have gone in a few directions. We like all those players up there … you’re comparing good options.”

There was thought that Orioles might choose Vanderbilt third baseman/outfielder Austin Martin, who slid to fifth when he was taken by the Toronto Blue Jays.

“The tough thing this year is that there are that many draft picks remaining,” Elias said. “We’re going to have to take the best player on the board … and not force anything” in the remaining four rounds.

Overall, Elias thought the draft was a strong one.

“It was a bunch of good choices this year,” Elias said. “It wasn’t like we were sifting through the lesser of two or three evils … If our pick was a pick or two later, we would have happily taken some of these other guys and been high-fiving.”

“If you’re playing shortstop for your high school team or your college team, that’s where the best baseball players on the team usually play,” Elias said. “Naturally, it pushes them up the boards. A guy like Westburg, he can play shortstop.

“He gets into pro ball, and who knows what our roster is going to look like when he makes the big leagues? If there is a better defensive shortstop, he can go play second, he can go play third. That’s the beauty of shortstop. You can go play other positions … It also happens to be an area with a lot of opportunity in our system, so that doesn’t hurt.”

The Orioles have the second pick of the second round on Thursday, the 39th overall, and three more selections after that. The draft begins at 5 p.m.

Elias said that the Orioles could select some pitchers in rounds 2-5. In 2019, they didn’t draft a pitcher until the eighth round.

“Maybe we’ll get some good pitchers tomorrow,” he said.

Normally, the draft is 40 rounds over three days, but Elias said he was able to navigate the selection process with few issues.

“It was not that bad,” Elias said. “We probably got a little fortunate that the players at the top of the draft, as you saw, were all college guys so you had three years’ worth of stats and video and scouting looks and all kinds of history.

“It was really just an abbreviated version of what we normally do with college players. Had it been a bunch of high school players, I think it would have felt a lot different in that regard, but it wasn’t.”

For the first time in draft history, the first seven selections were college players.