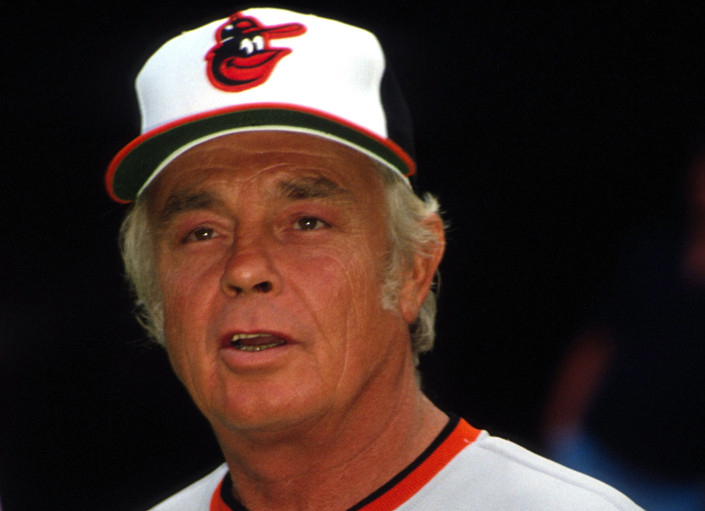 This year, we’ve unveiled all-time Oriole teams — pitchers and position players. Earlier this month, we had our all-time underrated team. A few readers suggested we do the same for managers and coaches, so here’s our all-time Orioles list.

This is an obvious choice. Weaver accumulated 1,480 wins, by far the most in team history. Buck Showalter had the second most, 669, not even have half as many.

Weaver won six American League East titles, four pennants, and the 1970 World Series in 17 seasons. What was most impressive is that in his first iteration as manager (1968-1982), his teams never finished fewer than six games over .500, and won more than 90 games 11 times in 14 full seasons.

He didn’t have a team with a record under .500 record until 1986, the season after he returned to managing after 2 ½ years away.

Weaver has been mischaracterized as a manager obsessed with home runs and a ruthless umpire baiter.

In 1973 and 1974 when he had a team that didn’t hit many home runs (235), he went against his usual instincts and turned his runners loose and they stole 291 bases, winning the AL East both times.

Honorable mention: Showalter broke a 14-year streak of losing seasons in 2012. Hank Bauer, who preceded Weaver, guided the team to its first  World Series in 1966, and Joe Altobelli, who succeeded him, won the 1983 Word Series.

Bamberger had 18 20-game winners during his time with the Orioles. He left in 1978 to become manager of the Milwaukee Brewers.

Honorable mention: Ray Miller succeeded Bamberger as pitching coach and, under his direction, Steve Stone won a club record 25 games in 1980. Miller served as pitching coach from 1978-1985, leaving to become manager of the Minnesota Twins.

Harry Brecheen was the team’s first pitching coach in 1954 and served until Bamberger replaced him in 1968.

Ripken managed the Orioles in 1987 and for the first six games of their 0-21 start in 1988. He became the first manager to have two sons, Cal Jr. and Bill, play for him.

Overall, Ripken was an Orioles coach for 15 seasons. He spent the 1976 season as bullpen coach.

Honorable mention: Billy Hunter had a terrific career as Oriole third base coach from 1964-1977 when he left to manage the Texas Rangers.

Hunter was the third base coach for the first two Orioles world championship teams in 1966 and 1970.

At 91, he’s also one of the few surviving members of the original 1954 Orioles team that moved to Baltimore from St. Louis. After he managed the Rangers, Hunter returned to Baltimore to become the baseball coach and athletic director for Towson University, retiring in 1995.

Bobby Dickerson was third base coach from 2013-2018 and gets high marks for mentoring Manny Machado.

First base coach: Wayne Kirby was the Orioles’ first base coach under Showalter from 2011-2018. Kirby’s gregarious personality and his popular “Cooking with Kirby” videos overshadowed his deep knowledge of outfield play.

Kirby also tutored Trey Mancini, who hadn’t played the outfield, on the finer points of playing left and right in 2017.

Honorable mention: Jim Frey was Orioles first base coach from 1974-79. Like Bamberger, Miller, Hunter, Ripken and Robinson, Frey became a major league manager after coaching under Weaver. He was a hitting and bullpen coach from 1970-1973.

Frey left the Orioles in 1980 and won the American League pennant with the Kansas City Royals. He died on April 12 at 88.

Bench coach: John Russell. The role of bench coach is a relatively new one and didn’t become standard in baseball until the 1980s.

Russell and Kirby joined the Orioles’ coaching staff in Showalter’s first full season in 2011. Russell started 2011 as the team’s third base coach but early in the season switched roles with Willie Randolph and moved to the bench.

Showalter raved about Russell’s ability as a catching instructor, and he worked well with Matt Wieters and Caleb Joseph.

Crowley stayed with the organization for several years as a roving minor league hitting instructor and briefly served as the team’s bullpen coach in 2011.

Bullpen coach: Elrod Hendricks holds a club record that probably won’t be broken. Hendricks was the Orioles’ bullpen coach for 28 seasons from 1978-2005.

Hendricks was beloved by fans for his friendliness and accessibility. He died in December 2005.