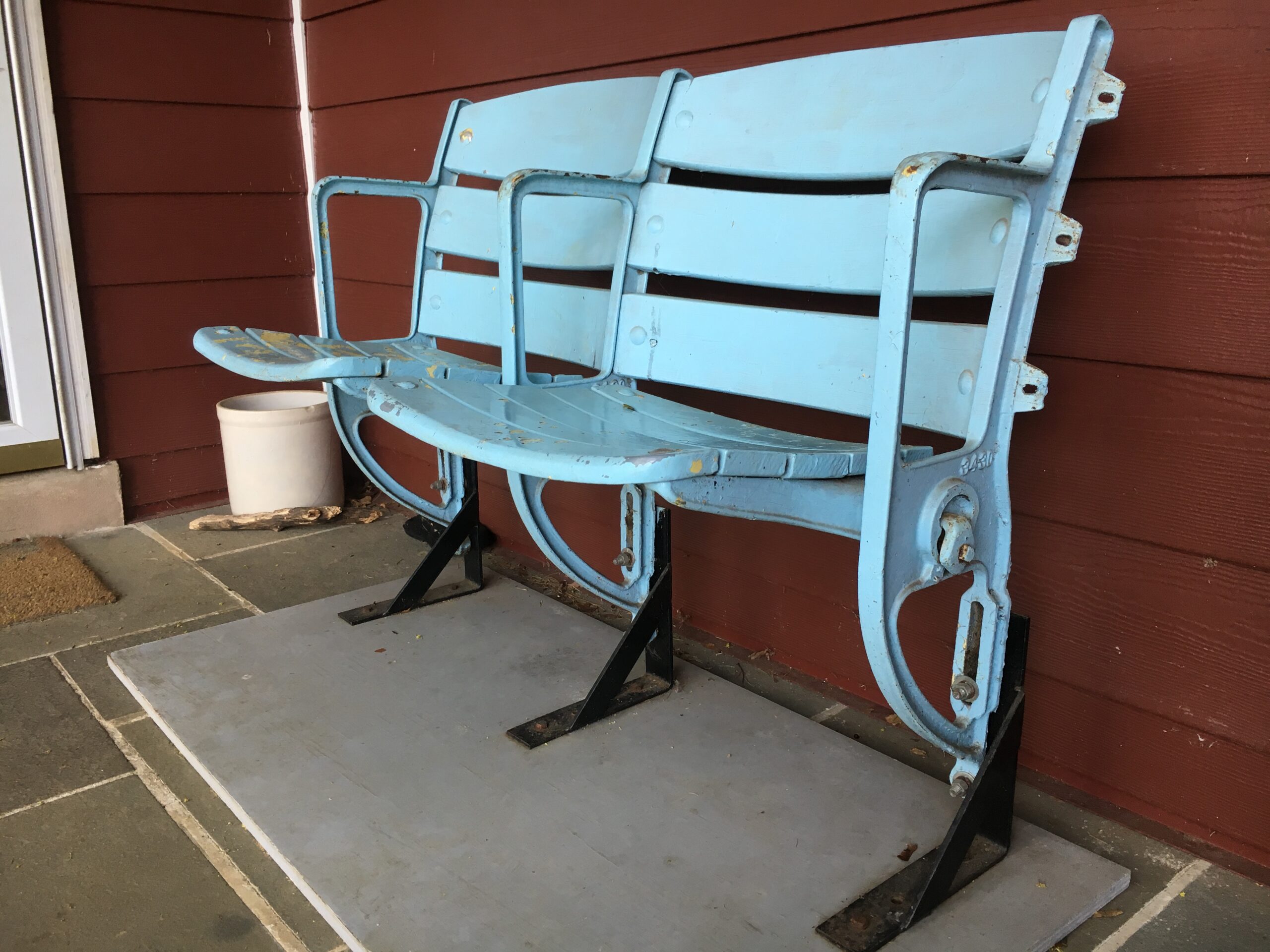 When I went to Orioles games as a child — usually with my parents and a gaggle of neighborhood kids via the Junior Orioles program – we would sit in the backless, metal bleachers of the far reaches of Memorial Stadium’s upper deck. We would listen to Wild Bill and his Roar from 34, and we would stare longingly down at the sky-blue field box seats right behind home plate.

One year, through a family friend, we scored those box seats on the Sunday before Labor Day; I recall thinking it was unfair that I had this seat for a baseball game today and would be in school two days later. We talked with Doug DeCinces and Al Bumbry in the on-deck circle, we heard the pop of a fastball hitting the catcher’s mitt, and we knew that we had, literally, the best seats in the house.

I still have two of those seats, salvaged from Memorial Stadium in its final hours, and now they proudly rest on my front porch as Section 1, Seats 1 and 2 for neighborhood Wiffle ball games.

Baseball, perhaps more than any other sport, has currency in nostalgia. Ken Burns captured that in his epic nine-part documentary, retired stars attract crowds to autograph shows (or did pre-coronavirus) and vintage radio play-by-play announcers such as Chuck Thompson – ain’t the beer cold! – achieve legend status.

The boom in stadium construction over the past quarter century created a side industry in such nostalgia, as fans could claim a piece of their team by acquiring items from a defunct ballpark. When stadiums in St. Louis and Detroit closed, the teams auctioned off pretty much everything, including lockers and vials of infield dirt. Seats from old Yankee Stadium cost upward of $1,000.

By 2000, the Orioles had already been settled in their Camden Yards home – still the crown jewel of the baseball stadium renaissance – for eight years, and the fledgling Ravens had moved into their roost next door.

With Memorial Stadium facing imminent demolition, the Maryland Stadium Authority held a sale of the stadium’s seats — along with concession signs, railings and more. So I made one last trip down 33rd Street to the ballpark to take home a piece of my childhood.

The scene was surreal.

Where thousands used to cheer, the seats had all been removed, leaving a hulking, cracked concrete skeleton that exposed the stadium’s bones. A toppled foul pole rested among weeds beyond where the left field fence had been. One dugout was filled with fencing, and the only cheers came from the ghosts.

One other thing struck me immediately: The rainbow-colored seating scheme I remembered – sky blue for box seats, green for terrace box, pale yellow for the mezzanine level, pink for upper reserved – was gone. All the seats had been painted navy blue or battleship gray, a scheme apparently concocted for the short-lived history of the Canadian Football League’s Baltimore Stallions.

I purchased a pair of the gray seats, and I knew immediately that a uniform change was in order. These were not going to be Baltimore Stallion seats. These were going to be the field box seats of my youth, the ones that matched the color of the sky on a perfect day for baseball.

I reached out to Bill Stetka, the longtime Orioles public relations director, who knew just about everything about the team except the official paint color of the field box seats at Memorial Stadium. He put me in touch with the stadium operations people, but I struck out with them as well.

So I was on my own. I took an old color photograph of the stadium to a paint store, and the patient salesman and I went through about a dozen blues before we settled on one that we figured was as close to the real thing as DeCinces was to me that Sunday afternoon.

I mounted the two seats to a piece of plywood, painted gray to simulate the concrete, and now my lower box seats once again offer a perfect view of home plate, which sometimes strongly resembles a paper plate. I’m actually a lot farther from the Wiffle ball on-deck hitter than I was from Orioles on-deck hitters that Sunday afternoon, but, hey, the beer is cold and the popcorn is free.

As I watch an argument unfold about whether a thrown ball hit a runner – a debate that has raged since probably the first inning of the first game in Wiffle ball history – and as I watch an 8-year-old batter swing away in fading sunlight, I realize that, yes, once again I have the best seat in the house.