For John and Andrea, a love of sports drew them together - BaltimoreBaseball.com 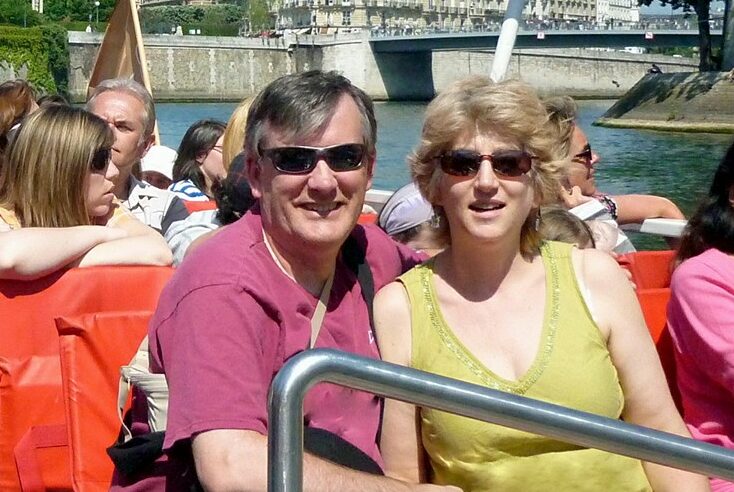 In marriage, as in sportswriting, it’s easy to fall back on clichés. “You complete me,” some are fond of saying. When a couple supposedly knows each other well, they’re said to complete each other’s sentences.

For Andrea Chamblee, it was her duty to complete, and not finish, her husband’s recently published book, “The Capital of Basketball,” a history of high school ball in the Washington area.

Her husband, John McNamara, who was one of five victims of the shooting at the Capital Gazette’s office in Annapolis on June 28, 2018, had nearly finished the book he had worked on for 13 years.

McNamara, a longtime sportswriter who later covered local news, had written much of the book, and what was left were the first and final chapters. Chamblee went through her late husband’s meticulous notes, and with the help of longtime area sportswriter David Elfin, she was able to finish it.

Last Saturday, Chamblee hosted a book signing and talked about The Capital of Basketball, at a Barnes & Noble in Annapolis. The event was taped by C-SPAN2’s Book TV for later airing.

The couple did meet after a Maryland football game, and were married for 33 years.

Chamblee, who’s 58, is a lawyer for the Food & Drug Administration in Washington, and covered sports for the Howard County Times when growing up in Clarksville. “The only one that paid for that sort of thing,” she said.

“I was a bit of a homer, I admit, for my high school teams,” Chamblee said. “John never was. John rooted for Maryland in private, but I thought his writing was very level-headed and even-handed. He was at least as big a fan as I was.”

Both Andrea and John were big baseball fans. As a young boy, he attended the last Washington Senators’ game on September 30, 1971, a game the Senators forfeited because fans, disgusted with the team’s impending departure to Arlington, Texas, stormed the field in the ninth inning.

Chamblee grew up as an Orioles fan and as a teenager caught a foul ball that Dave Duncan hit against the Detroit Tigers in the mid-1970s.

For much of their marriage, the couple attended Orioles games, but when the Nationals arrived in 2005, McNamara was enthralled.

“John observed that he forgot how happy a Washington home team made him every day,” Chamblee said.

The couple lived in Montgomery County, and though McNamara liked the Orioles, he could now be a Nationals fan.

“He loved going to the games,” Chamblee said. “We had exchange students stay with us over the last 15 years and he would like to take them to a game and explain to them why it was not just this slow, boring game to watch. He opened a lot of eyes to baseball.”

McNamara continued to attend occasional Orioles games, and was often a visitor to Bowie Baysox games, where he became friendly with manager Gary Kendall.

But it was the Nationals who captured his heart.

“When Bryce Harper left and everyone was wringing their hands about that, he told me, I didn’t have to worry about the Nationals because they had Juan Soto, who was going to be great,” she said.

In September 2018, Chamblee took her husband’s ashes and with the team’s permission, distributed them at Nationals Park.

“Juan Soto hit the game-winning home run and, of course, he did great in the World Series,” Chamblee said. “I’m hoping I get a chance to take Juan Soto out for a coffee, or now that he’s 21, maybe even a beer.”

The couple had a variety of interests, away from sports, but it was Nationals Park she chose for the cremains.

“I read John a story in the newspaper one day about a guy who completed putting his friend’s ashes where he wanted,” Chamblee said. “His friend was a baseball fan and a plumber, and he went around the country and flushed his friend’s ashes down the toilet of every stadium in the United States.

“I read this to John and asked if that’s what he wanted, and he said, ‘Maybe without the toilet?’ and he said that Nationals Park would be enough. Of course it was a joke then.”

She was glad that she was able to put some of his ashes in left field.

Chamblee enjoyed the Nationals’ World Series run, and during Game 7, a friend texted her from Nationals Park, where fans had gathered to watch the game from Houston.

Her friend was in left field by the begonias, the spot Chamblee had spread his ashes a year earlier.

For her, watching games is another way of communicating with her husband.

“I watch the game, and I ask John how he’s doing, but he doesn’t say he’s here like he did to his friend,” she said. “What I can do is ride my bike because we always rode together.

“’Come on, it’s a nice day for a bike ride, let’s go out there,’” he’d say. “The one time I did it after he died, I just cried the whole way. I couldn’t see where I was going, but games are manageable. I like watching the game.”

On June 13, 2018, McNamara attended what would be his last Orioles game, an afternoon game against the Boston Red Sox.

He’d often come to weekday afternoon games, eschewing the Capital’s seat in the press box’s front row for a quiet view from the back.

“The Orioles were a perfectly fine substitute for a Washington team, but it wasn’t quite the same to him,” she said. “We went to a couple of Orioles games a year, and they were great fun. You can’t see the Bromo-Seltzer clock anymore.”

On the day McNamara died, the Orioles were playing an afternoon game, and just before the game began, word spread that there was a shooting at the Capital Gazette offices.

Had he decided to come to the ballpark that afternoon, his life would have spared.

“That day was right after the primary in Maryland,” Chamblee said. “John had been shifted over to help with the news and he didn’t get home until three that morning because he had been working on the primaries, and he got up at seven.

“I got up with him, and made my coffee and started out the door. ‘Can’t you just work from home today? You haven’t had enough sleep to make this drive.’

“He said, ‘No, the Fourth of July is coming and people are off, and they need people in the office, and I can’t work from home.’ I feel so conflicted about that because I know if I had told him that it was really important for me that he work from home, he would have done it for me, but I can see, conversely, it was really important to him to be there for his colleagues.”

The couple had decided to retire on March 31, 2021, and on that final morning together, Andrea Chamblee asked Alexa how many days were left until their retirement. It was 1,008.

That day, McNamara just had to go into the office.