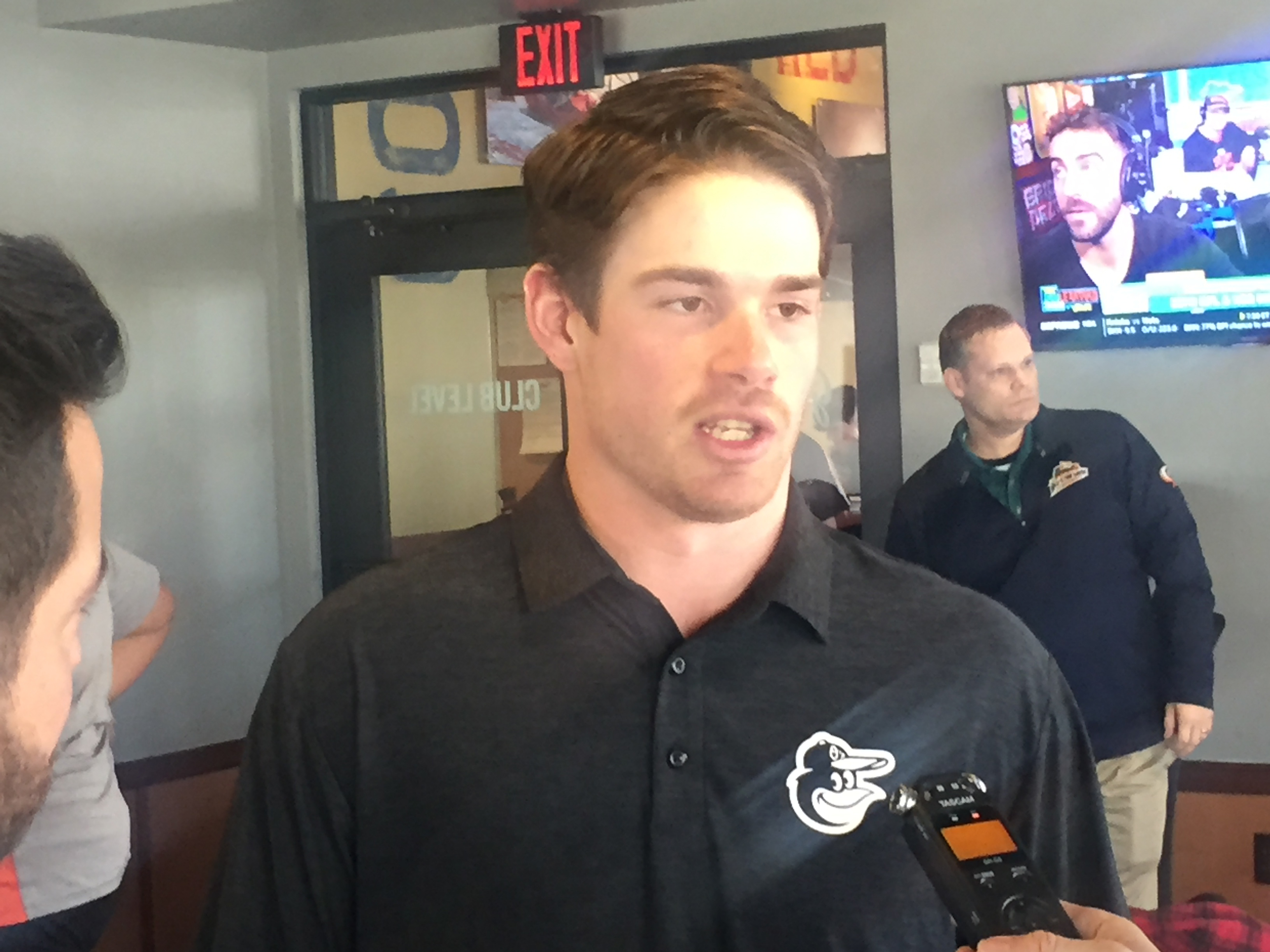 It’s rare for a Marylander to play for the Orioles. Bruce Zimmermann would like to be one of those rare Birds.

In the 65-year history of the Orioles, only 25 Marylanders have played for their home team.

Last season, two pitchers, Ryan Meisinger, who has since moved on, and Evan Phillips, who was born in Salisbury but moved out of state at a young age, made their debuts.

Phillips came to the Orioles from Atlanta in the July 31 trade that sent Kevin Gausman and Darren O’Day to the Braves.

On the day of the non-waiver deadline, Zimmermann was with the Braves’ Double-A Mississippi team.His sister messaged him, wondering if he might be on the move.

“‘No, nothing’s happening with me, I’m doing fine,’” Zimmermann said at Bowie’s Hot Stove Luncheon in Edgewater on Jan. 25.

“Lo and behold, 15 minutes later, I get called to the office, get told I’m getting traded. It’s definitely a shock, but coming back to the hometown team, it feels great, something I always grew up dreaming of as a kid.”

Zimmermann grew up in Ellicott City and could become just the second Howard County native to play for the team. Infielder Steve Lombardozzi, who was from Fulton, played 20 games for the Orioles in 2014.

Zimmermann was an avid fan as a child.

“Through and through, I grew up definitely as an Orioles fan,” Zimmermann said. “As long as I can remember, coming to Camden Yards with my dad, wanting to be the Orioles at the local rec league.”

Zimmermann began high school at Cardinal Gibbons, which closed at the end of the 2010 school year and spent his final three years of high school at Loyola Blakefield.

The left-hander, who will turn 24 on Feb. 9, earned a scholarship to Towson but transferred to Mount Olive College in North Carolina after two years.

The Braves drafted him in the fifth round in 2017. After 11 starts for Atlanta’s Danville team in the Appalachian League, Zimmermann did so well for the Braves’ Low-A affiliate in Rome, Ga., that he was moved up two levels to Mississippi.

Before long, he was at Bowie, where his family and friends could watch him pitch for an organization in the midst of a makeover.

“I also know there’s a lot of opportunity with the way the organization is moving, so definitely a blessing, and glad to be home, and ready to continue my career with the Orioles,” Zimmermann said.

In between moving and getting acclimated to a new team, Zimmermann knew he didn’t have much time before the season ended on Labor Day.

“When I finally got up there, I realized I had about five starts before the end of the season,” Zimmermann said.

“I just wanted to show who I was. I was coming over from Double-A in Mississippi. I wanted to keep doing what I was doing … make my presence known, have a good finish to the season, a strong finish, to move into this year and really move forward with the first season with the Orioles.”

In his five starts with the Baysox, Zimmermann was 2-3 with a 5.06 ERA. He’s adjusting to pitching closer to home.

“There’s more eyes on me with the people I grew up with,” Zimmermann said.

“They don’t really see much of minor league baseball when you’re playing in a different part of the country, but now that I’m home, and all of the Orioles’ affiliates are relatively close … there might be a little extra pressure. I don’t feel that way. I kind of like it, having my parents being able to see me pitch, and my friends that I grew up with. I think it actually adds to the experience of minor league baseball.

“…[When] you’re playing all over the country, you get the fans, but you don’t get the close fans and family and friends.  I think it’s really nice to have the ability to come out and watch me play, and I look forward to seeing them out there.”

Zimmermann is staying with his parents this winter and training in Elkridge. He has extra interest in following the team he’s always watched.

“I grew up an Orioles fan, so I’ve seen the good and the bad and everything in between,” Zimmermann said.

“When I saw the trades starting to happen when I was still with the Braves, I was still excited for the Orioles. I’m still an Orioles fan, so I’m happy that they were starting to make strides to really bring the organization into the newer era of baseball. Once I joined the Orioles and saw the new hires with [manager Brandon] Hyde and [general manager Mike] Elias, I’m very excited about those guys.”

Zimmermann is eager to meet Sig Mejdal, the Orioles’ assistant general manager in charge of analytics.

“He is apparently a guru of analytics and sabermetrics,” Zimmermann said. “I definitely have grown to start to utilize [analytics] in my own game, so I’m definitely excited to hopefully sit down with those guys, at least Sig … see what their plan is for me. I’m very excited about the new direction the organization is moving in. There’s a lot to be excited for in the upcoming seasons.”