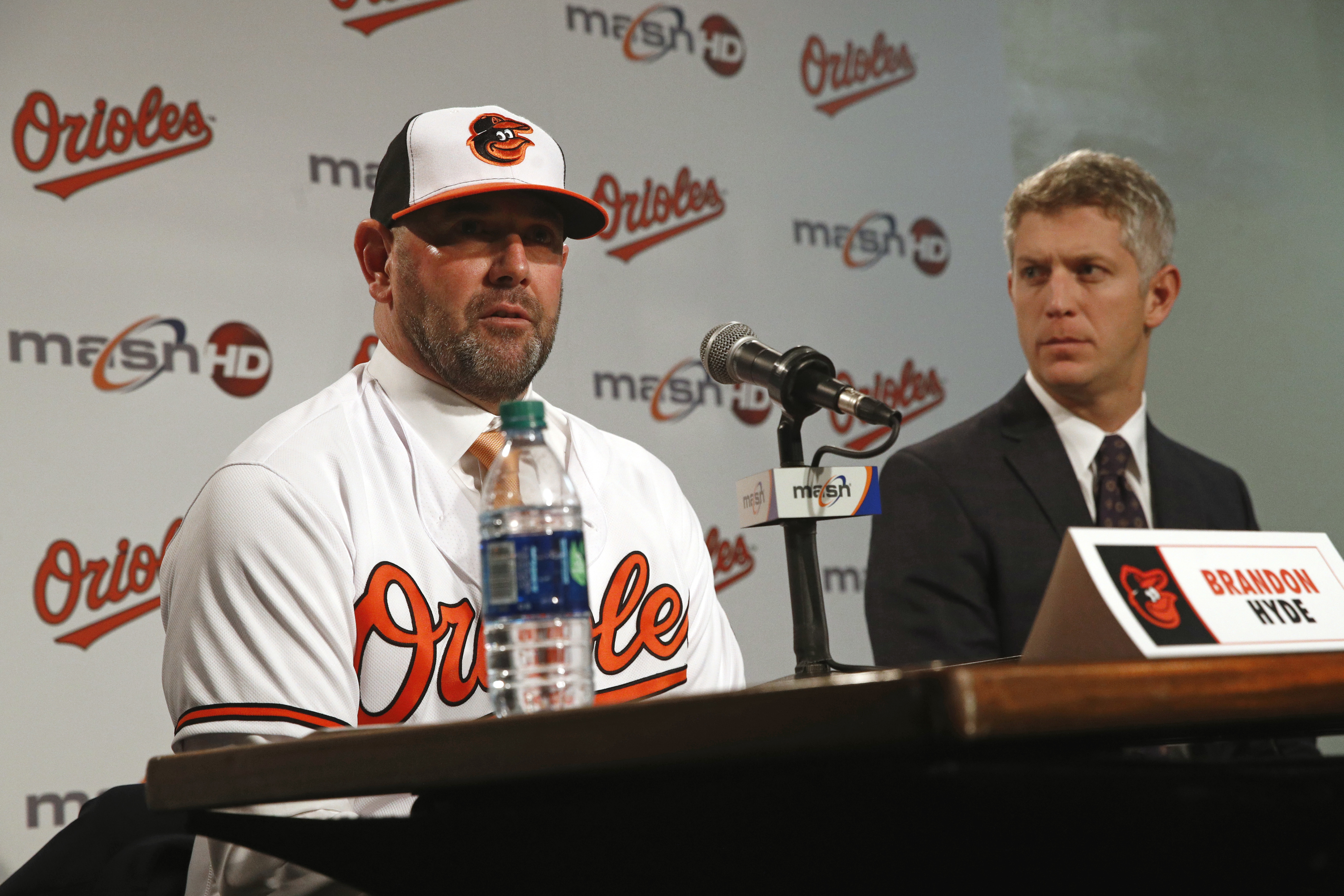 BALTIMORE—As Mike Elias began his search for the new manager of the Baltimore Orioles, the first name recommended to him was Brandon Hyde.

Elias became the Orioles general manager on Nov. 16, and began reaching out.

“Called dozens of people, friends throughout the game,” Elias said. Not only was Hyde’s the first name he heard from the people he trusts, it was a popular name.

“In every phone call that I made, his name always came up,” Elias said. “It was a pretty easy decision to have him on the candidate list. He’s somebody that is viewed as an up-and-coming star in our business.”

Hyde, who is 45, said that he was perfectly content being Joe Maddon’s bench coach with the Chicago Cubs.

“Looking forward to trying to win the National League next year,” Hyde said. “In a great situation, working for unbelievable people with a really good team.”

He had several managerial interviews after the Cubs season ended in October.

“I’m not sure why,” Hyde said. “I think being a bench coach for Joe helped out a lot.

“…I had an opportunity to talk to a bunch of clubs and I wanted to see what it looked like.”

A few weeks ago, Elias and his assistant GM for analytics, Sig Mejdal, met with Hyde, and after spending the day with them, the new manager of the Orioles was convinced.

“It was an easy conversation,” Hyde said. “Really intriguing to me at that point. I really felt like it was a good fit.”

Hyde acknowledged that he wasn’t familiar with the players on hand. He managed Andrew Cashner in the Arizona Fall League many years ago, but hasn’t worked in the American League East until now.

“I just got here,” Hyde said. “This happened pretty quick. My next order of business is going to be [constructing a] coaching staff. I’m going to get as much video as possible of our roster…I’m going to get to know our guys, get on the phone, start the relationship process as early as possible.”

Hyde said that he and Elias will now begin discussing coaching candidates.

“How we slot our coaching staff is going to be about fit,” Hyde said. “We’re realistic in that we’re late in the game. It’s mid-December, and we don’t have a coaching staff, yet.”

Just before his formal introduction, Hyde went to his new office. He saw pictures of Earl Weaver and Cal Ripken Sr. Besides his wife and children, the person nearest him during the press conference was Brooks Robinson.

“I grew up a baseball rat that knew history, knew tradition and to be around history and to be involved in a city like Baltimore is a dream come true,” Hyde said.

Elias felt that there was an immediate rapport with Hyde.

“He has the same view that I do that this is a partnership between the front office and the coaching staff,” Elias said. “We are going to be working towards the same goals, doing so in a collaborative, open manner where we’re communicating constantly. To me, the connection that I felt personally in dealing with Brandon was very important as well.”

Hyde is taking over a ballclub that lost a franchise-worst 115 games in the American League East, but having seen the Cubs rise from 101 losses in his first season in that organization to World Series champs less than five years later, gives him hope that something similar can happen in Baltimore.

“We got better quickly,” Hyde said. “I think that’s very, very possible. [Elias and I] have come from two organizations that have had some down years, but all of a sudden get good real quick. That’s going to be the process here, and we’re looking forward to getting it going.”

Hyde is realistic about his accomplishments. He never played in the majors and wasn’t considered a prospect.

“I was an average to below-average player that had to work for everything he got,” Hyde said. “I started as a Single-A hitting coach, hoping to someday be a big league coach with no expectations.”

He wants to always be positive around his new players.

“I have so much respect for the major league player and to be able to perform every single night,” Hyde said. “I want to help them as much as I possibly can.”

Not only will he call players, but he’ll try to visit as many as possible.

Hyde was a bench coach for two managers who won World Series, Maddon and Jack McKeon with the Florida Marlins.