Friday was the most active day in Mike Elias’ brief time as the head of Orioles baseball operations. He began it by dismissing Brian Graham, who ran the minor leagues for the past six years, and concluding it by not offering contracts to Tim Beckham and Caleb Joseph.

The moves to sever ties with Beckham and Joseph, at least for the moment, seem to be financial. The team is cutting costs ahead of a season or two when they’re not going to contend.

With Graham, things were more complicated but expressed simply. In a typically classy text message to a handful of reporters who regularly cover the club, Graham said that Elias had told him he’d done a great job as the interim general manager between the firing of Dan Duquette and the hiring of Elias. However, Elias wanted a new hire to run the minor leagues.

Earlier in the week, Elias had told scouting director Gary Rajsich that his time with the team was up, too. Rajsich’s termination was expected. Graham’s wasn’t.

Eight days from now, Elias will arrive in Las Vegas for the Winter Meetings, and aside from Sig Mejdal, his assistant GM for analytics, his traveling party’s identity is anyone’s guess.

Tripp Norton, the director of baseball operations, who’s been with the Orioles for 21 years, is expected to be there. So is Kent Qualls, director of minor league operations.

When Duquette was dismissed on Oct. 3, it was announced that Graham, Rajsich and Brady Anderson, the Orioles’ vice president of baseball operations, remained under contract.

Some fans think Anderson’s presence is a litmus test of Elias’ autonomy. It’s not.

Graham and Rajsich had specific jobs, and Elias probably has specific people in mind for those positions. Anderson’s job is more amorphous. He’s been focused on offseason training of players and improving nutrition while also being available to help Duquette, former manager Buck Showalter and players during the season. He also helped negotiate contracts for pitchers Andrew Cashner, Alex Cobb and Chris Tillman.

Elias can figure out Anderson’s role later. He needs replacements for Graham, Rajsich and, especially, Showalter.

It seems unlikely that the Orioles will have a new manager in the coming week, and perhaps Elias will conduct interviews in Las Vegas.

For the moment, the Orioles have 38 players on the 40-man roster, leaving them free to add a Rule 5 draftee or two or pick up a player on waivers. They’ll have first choice in the Rule 5 draft as well as for waiver claims.

Beckham’s departure wasn’t a surprise. He was projected to make $4.3 million in arbitration, and the Orioles were uncomfortable with that.

When he was acquired at the July 31 non-waiver trading deadline in 2017, Beckham had a glorious first month, hitting .394 in August, tying the club record with 50 hits.

He never had more than 24 hits in any month after that. Core muscle surgery cost him more than two months of the 2018 season, and his Oriole career appears to end with a .258 average and .309 on-base percentage.

Beckham’s departure adds another hole to the team, which is about halfway between the end of the 2018 season and the beginning of spring training.

Jonathan Villar, who was tendered a contract, can play second or short. He was better at shortstop in his two months with the team. Fans seized upon the news Friday that Jonathan Schoop wasn’t offered a contract by the Milwaukee Brewers, and expressed hope for a reunion.

Schoop was estimated to make more than $10 million in arbitration. In his two months with the Brewers, he batted just .202 with four home runs and 21 RBIs. He was hitless in eight postseason at-bats.

Schoop is likely to be a desired commodity, and the Orioles seem unlikely to bring him back. Elias wasn’t with the team when Schoop was the Most Valuable Oriole and the team’s only All-Star in 2017, so there aren’t warm memories there.

While he would be fun to have around, the guess here is that Schoop will sign somewhere else for much more money than the Orioles would pay him.

As for Joseph, whose arbitration estimate was $1.7 million, it seems a bit more likely that he could return but at a reduced rate. He wasn’t one of the best catchers in Orioles history. But he was one of the nicest and most pleasant players in a clubhouse full of friendly and interesting guys.

Joseph was the final player remaining on the 2014 team that played in the American League Championship Series. (Chris Davis was serving a 25-game suspension at the time.)

His numbers with the Orioles were far from great. Joseph batted .224 in five seasons with the team. He was there for some crucial moments.

After setting a record for most games played with Double-A Bowie, Joseph was finally called up to the Orioles a few weeks shy of his 28th birthday. He helped compensate for the loss of Matt Wieters to Tommy John surgery.

Joseph’s best offensive season was in 2015 when he hit 11 home runs and drove in 49 runs, and it was followed by an awful year when he came to the plate 141 times and failed to drive in a single run.

That year was truncated when Joseph suffered a scary testicular injury, but he rebounded in 2017 and hit .256 with eight homers and 26 RBIs.

Last season was forgettable. Sent back to Triple-A Norfolk in May, Joseph hit .219, and he had to watch when his brother Corban got called up before he did. Later, the brothers played in the same game together a few times and even pinch-hit for each other.

In Orioles history, only two sets of brothers played in the same game, the Josephs and the Ripkens.

Joseph, who had a reputation as an offensive-first player in the minors, presented himself well defensively in the majors, throwing out a league-best 40 percent of runners who tried to steal on him in 2014.

Overall, Joseph has thrown out 31 percent of runners trying to steal and has a 5.7 Defensive Wins Above Replacement (dWAR). His offensive numbers are just 1.4 for his career.

The Orioles will look for a veteran catcher to try to complement Chance Sisco and Austin Wynns. For now, Andrew Susac remains on the 40-man roster, too, and maybe Joseph could come back as well.

Joseph was always available after games to explain pitching or talk about the offensive woes of the 2018 team, and he was always honest.

Honest about his own abilities, Joseph knew he was fortunate to be in the major leagues for five seasons, and now he’ll try to extend that career—here—or elsewhere.

Perhaps we’ll see him again in uniform or maybe as a broadcaster. Joseph has long been fascinated by broadcasting and his honesty and insights would make him an asset in any booth.

He’s also a skilled impressionist, and he does a mean impression of my loud laugh.

Beckham was enjoyable to have around, but we didn’t get to know him as well as Graham and Joseph.

Elias will hire his own people, and hire well, but Graham and Joseph were two of the best people, and they’ll be missed. 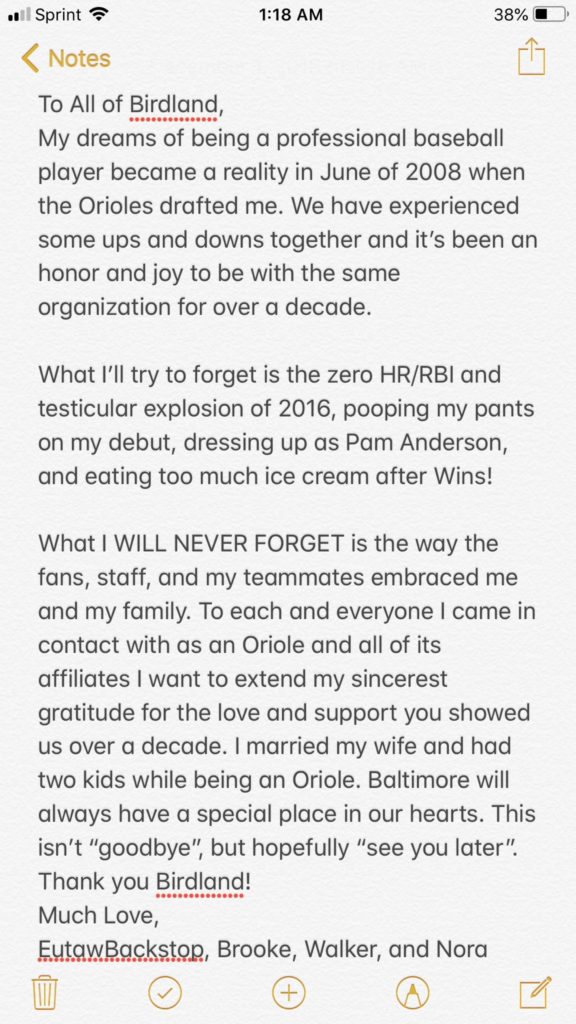