Elias says Orioles can win again if they trust the process - BaltimoreBaseball.com 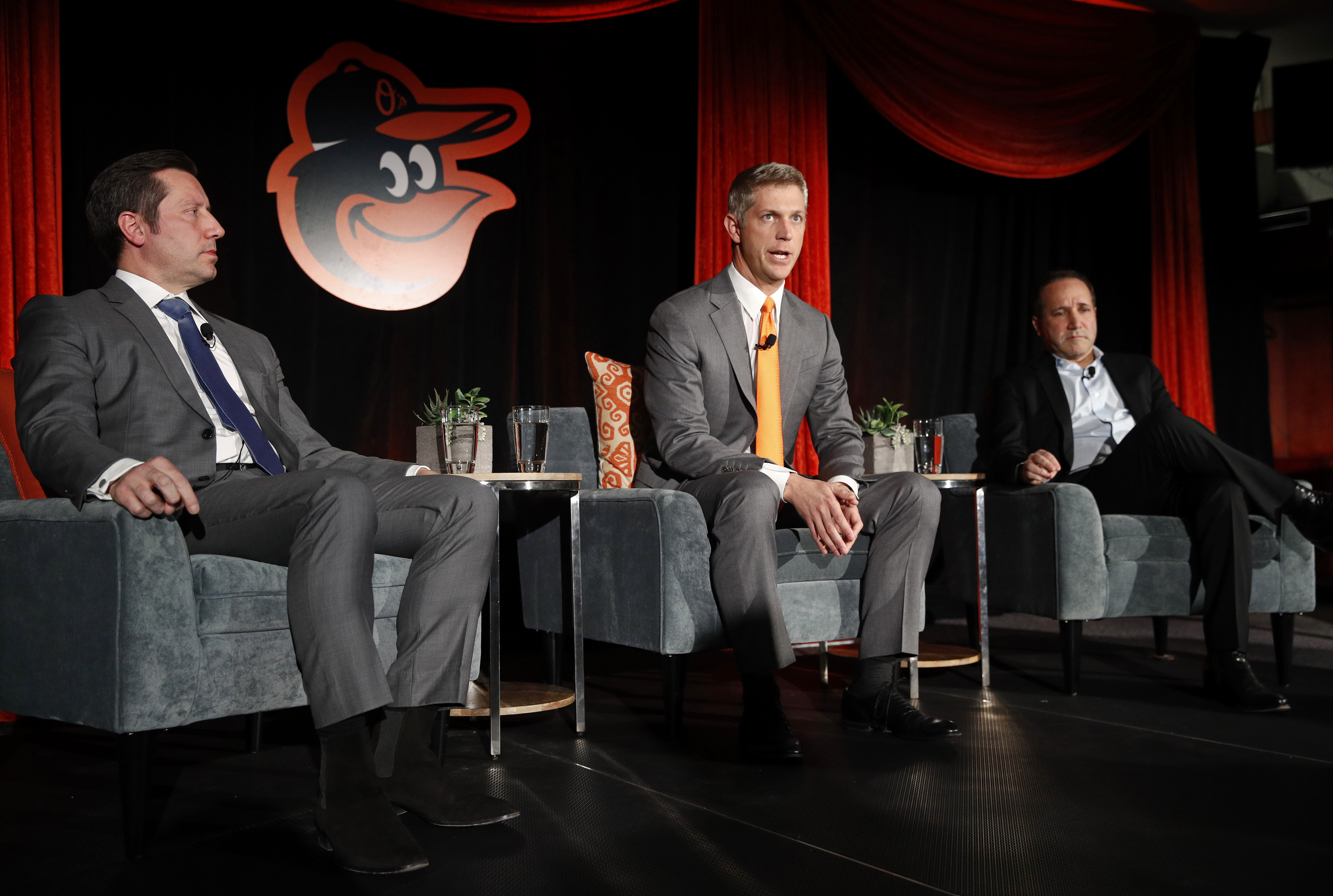 BALTIMORE—The hiring of Mike Elias as the Orioles’ new executive vice president and general manager is important for the team, and his Monday introduction served not only as his debut but as a demonstration that a new era is here.

The 35-year-old Elias, who was appropriately dressed in an orange tie, sat between Orioles managing partners John and Louis Angelos in an armchair in the middle of the clubhouse, an unusual setting for a team event.

Elias was chosen after a six-week search, and the Angelos brothers estimated they had spent 25 to 30 hours speaking with their new GM.

He comes from the Houston Astros, where he served as assistant general manager, and while he didn’t offer many specifics, he spoke with confidence.

“The plan is simple,” Elias said. “We’re going to build an elite talent pipeline that’s going to extend from the lowest realm of our minor league ladder … all the way up to Triple-A and up to the major league roster in Baltimore.”

Elias said that he’s seen the system work in Houston and St. Louis, where he worked before joining his mentor, Jeff Luhnow, with the Astros.

As a boy growing up in Northern Virginia, Baltimore was where Elias came to watch major league baseball, and he says he’s long had an affinity for the city.

“When you’re a kid growing up in Northern Virginia, Baltimore is a place that you come to to have fun,” he said. “I grew up coming to Camden Yards, visiting the Inner Harbor, visiting the aquarium.”

“I already have a lot of positive memories and positive impressions of the city. I love this city … I also got to see Camden Yards during that time. The stadium was filled to the brim and the city was supporting a championship-caliber team, a playoff-caliber team, so I know that there’s no place better in baseball.”

Elias refused to comment on the length of his contract or set a timetable for the team’s turnaround. Nor did he say what he’s looking for in a manager to replace the departed Buck Showalter.

He said that he’s already begun the background work on managers, and wouldn’t say if he hoped to have a manager in place in time for the Winter Meetings in Las Vegas on Dec. 9.

“It’s not something to rush for the sake of meeting artificial dates in the wintertime,” Elias said.

When Elias joined the Astros, some of their key players who helped the team win the 2017 World Series were already in the organization, and he believes that’s also the case in Baltimore.

“There are players, a lot of players on this team right now and in this organization, who are going to be a part of the next playoff team in Baltimore,” Elias said.

“A lot of good players and more coming … There are some future stars in the system, some really good pitchers. There’s more than enough to work with. Part of the attraction of this job to me is that I know there’s already players here that we’re going to be able to lean on over the next few years and watch grow.”

The Orioles have more than $6 million in international signing bonus money remaining. Elias, who has served as an international scouting director, didn’t say if he thought there were prospects worth using that money on, only that it was an important area to focus on. He also said he was accustomed to having a top-notch farm system, and that would also be a priority.

Analytics, an area in which the Astros excelled, is something that’s key to Elias.

“I have confidence that we can do this,” Elias said. “We can do this is in the right amount of time, and the analytics’ part of it is not optional in today’s game.”

Elias said that he thought the team makeover, which began with the trade of Manny Machado to the Los Angeles Dodgers on July 18, was smart.

“Those were the right moves,” Elias said. “I’m glad those moves happened.”

As for first baseman Chris Davis, who still has four years and $110 million left on his contract, Elias was in no hurry to cut ties with the slugger, who had a nightmarish 2018.

Elias seemed comfortable with the new leadership of the Orioles.

“I think very uniquely this organization has in its history, and its DNA, having at one time being considered as the smartest, the most forward thinking, most progressive thinking organization in baseball,” Elias said. “We’re here to restore that reputation.”