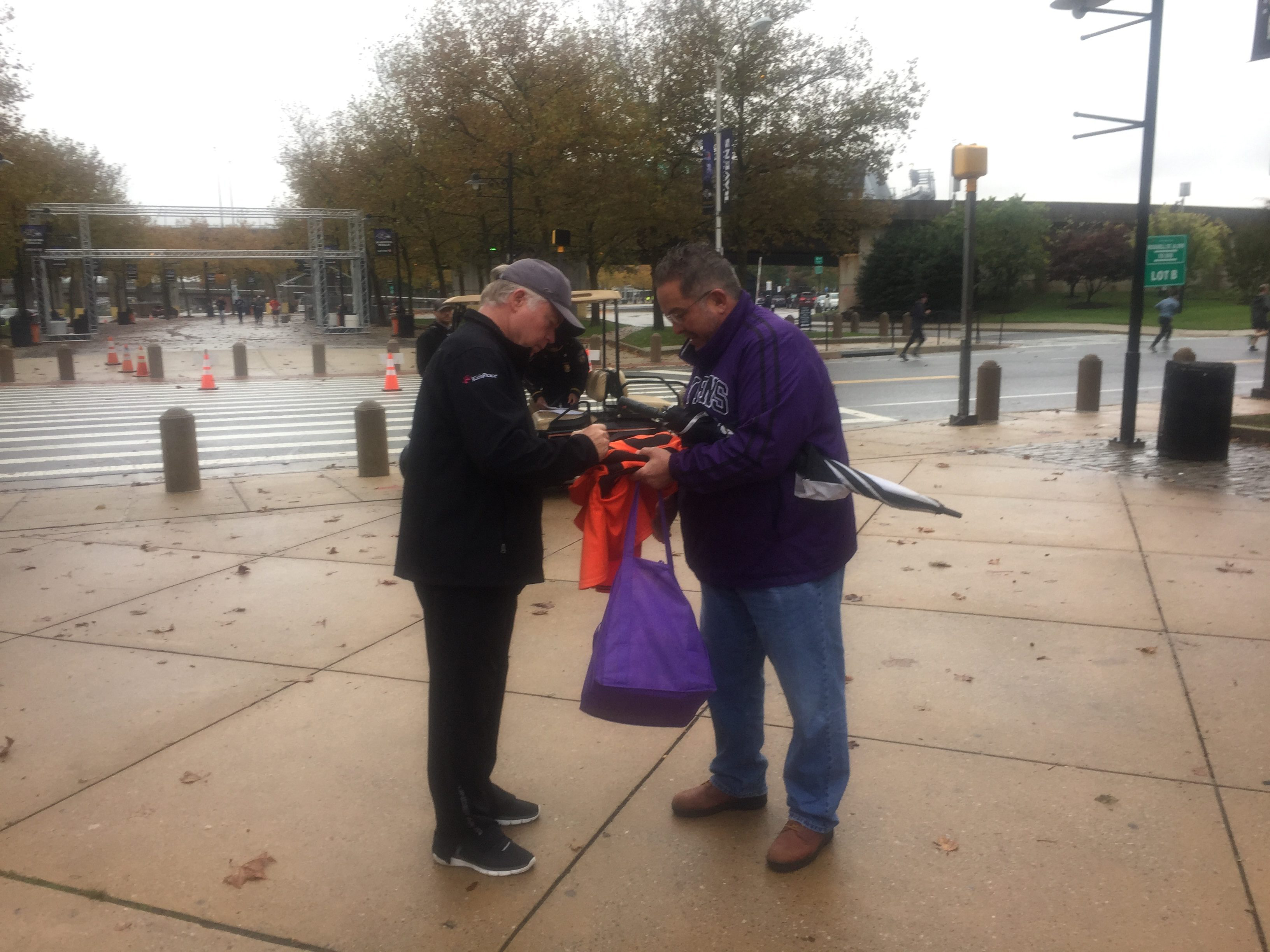 For the years they were in Baltimore, Buck and Angela Showalter’s chosen charity was KidsPeace, an organization that encourages foster care.

Each October, just before Halloween, there’d be a 3.1-mile run and walk designed to raise money and awareness for KidsPeace.

After his Oct. 3 dismissal from the Orioles, there was doubt that the Showalters would return from their Dallas home for the event at Camden Yards, which is held in conjunction with the team.

Showalter felt he had a commitment to the charity and event organizers, and even though he wasn’t as visible a participant as in the past, he and Angela were there on a dreary Saturday morning.

“Love you, Buck!” a fan yelled as he trotted past him. “Thanks, Buck!” others cried. “You’re the man!” another screamed.

A few runners stopped to shake Showalter’s hand, and one briefly chatted with him, thanking him for bringing exciting baseball to Baltimore.

“I had a lot of help,” Showalter told him.

It wasn’t an easy decision for the Showalters to return. The pain is still there, though Showalter has chosen to take the high road and not engage in talk about his firing after more than eight years as Orioles manager.

“We’re bringing closure to a lot of things,” Showalter said. He and Angela are selling their Baltimore County home, a place he very much enjoyed. On Orioles’ off days, Showalter would mow the lawn with his large tractor and delight in talking about it.

Most painful was finding a new home for the couple’s two miniature donkeys, but Angela managed to find a good family for them earlier this week.

“Packing. It’s a lot of stuff you accumulate in 8 1/2 , nine years, whatever it was,” Showalter said about his past few days. “It’s been … a thousand things I’d thought I’d lost.”

Wearing a “KidsPeace” jacket in Orioles’ black and orange, Showalter looked much more refreshed than he did in the final days of the dreadful 115-loss 2018  season.

It was Angela, whose family took in foster children, who introduced Buck to KidsPeace. Because of their commitment to the cause, Showalter felt they had to return, even though Angela wasn’t keen on the idea.

“She didn’t want me to come,” Showalter said. “She’s been very kind of protective about it right now. That’s her.”

In the weeks since he was let go by the Orioles, Showalter has been busy and, yes, Manny Machado’s postseason antics have been discussed.

“I had my hands full trying to get reorganized,” he said. “Talking to a lot of people. There have been a lot of calls about Manny. Lots of teams that are thinking about signing him, I can tell. That’s a tough conversation. I kept telling Manny, ‘You know they’re going to call, right?’”

Showalter wasn’t mentioned for any of the other five managerial vacancies this month. Four of them have been filled. Only the Orioles and Texas Rangers, another team Showalter once managed, are still looking.

He could always return to television, where during two other enforced breaks from managing he worked at ESPN as a well-received commentator.

“I’m too close to it, right now,” Showalter said. “I’ve had a lot of interesting calls, so to speak. I found that … when you want to make good decisions in life, you need to take some time and back off a little bit. Probably a week or so after the World Series, I’ll decide what direction, if any.”

He continues to be touched by the phone calls he’s received from former players wishing him well, and knows how much the fans thought of him. He didn’t want to hold a press conference for the event and decided to pass on the Friday night party, where runners and walkers picked up their numbers and race T-shirts. Being the center of attention is not his thing.

“It’s about the event and the charity,” Showalter said. He admits he’s bad at goodbyes, and that it’s difficult to accept the thank-yous from Oriole fans.

“My wife tells me I’m not good at that, so I’ll continue not to be good at it,” he said.

Four weeks ago when the season came to an end, Showalter knew he was going to be leaving the Orioles. It was also the presumed final day for the only Oriole who’d been with the club longer than Showalter, Adam Jones.

Showalter didn’t want Jones to have to share the attention with him, even though fans and media wanted him to.

“The last day I could tell that people were … I thought it was Adam’s day,” Showalter said. “I really did. I made sure it was all about Adam.”

Ron Johnson, who managed Triple-A Norfolk for seven seasons, will not return to the Orioles next season, according to an industry source. Johnson was named the winner of the Cal Ripken Sr. Player Development Award this season.