Orioles missed Ohtani on the mound, but how have they done historically against rookie stud pitchers? - BaltimoreBaseball.com 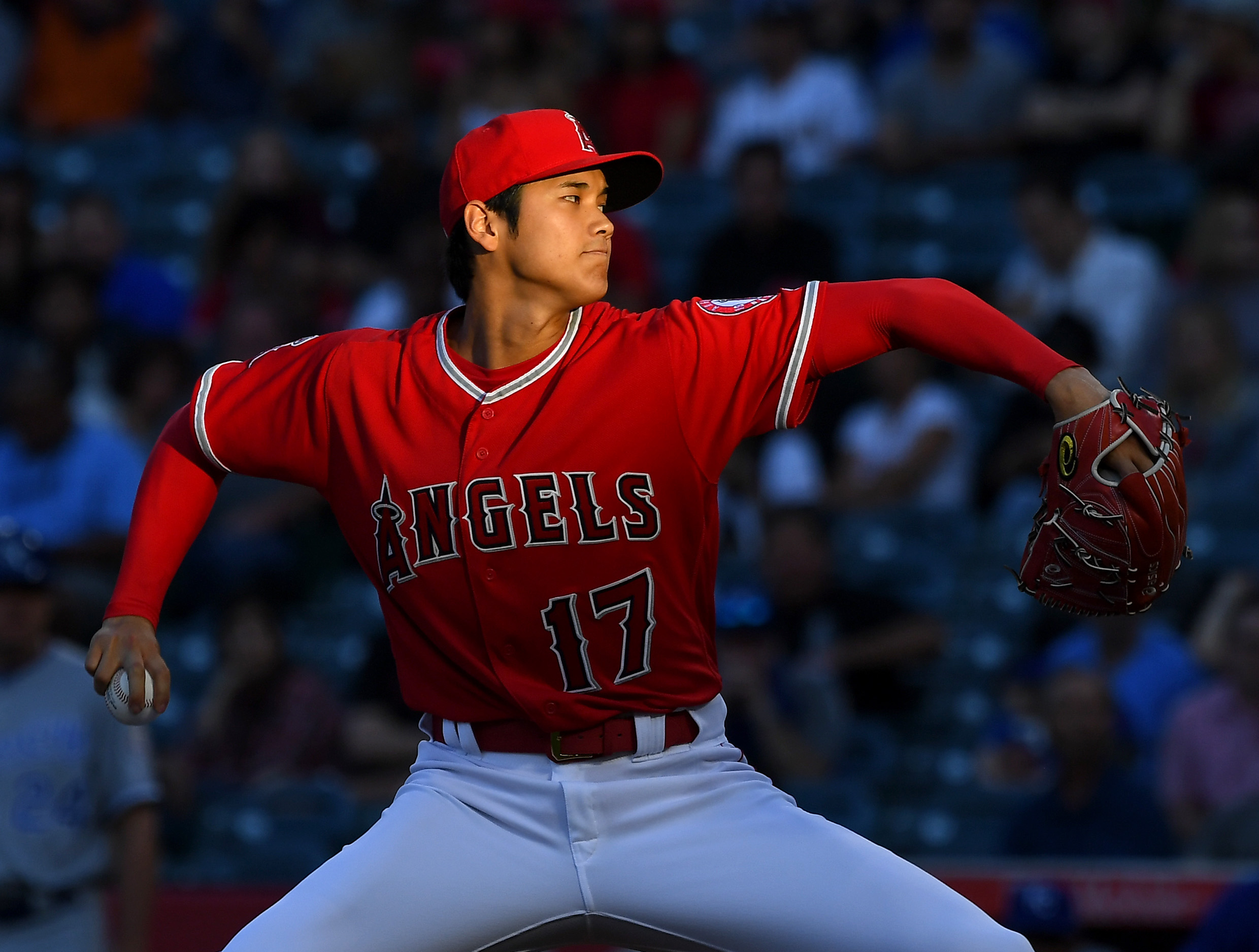 The Orioles finished their season series against the Los Angeles Angels on Sunday, and the Angels’ two-way rookie sensation, Shohei Ohtani, didn’t face them as a pitcher.

Ohtani was originally slated to pitch against the Orioles in the teams’ first series in May, but an ankle sprain scuttled his scheduled start. And by the time the Angels made their lone visit of the season to Camden Yards, Ohtani was on the DL with an elbow sprain he suffered in the first week of June.

He’d been off to a sensational start since signing with the Angels out of Japan, going 4-1 with a 3.10 ERA and an 11.1 strikeout rate as a pitcher (along with a .907 OPS and six homers as a hitter). In the Orioles three-game series in Anaheim, Ohtani was 3-for-11 (.273) with one RBI, three runs scored, a double, a strikeout and a walk.

We’ll never know how the Orioles’ offense would’ve fared against Ohtani in his debut season.

But that got me thinking — how have the Orioles performed in past years when they’ve faced highly touted, heavily hyped rookie pitchers? Have the Orioles’ bats usually been stymied by the promising youngsters, or have they been able to cut through the hype and deliver a strong performance?

Here’s a look at 10 of the most memorable rookie hurlers who pitched against the Orioles in the last 50 years.

Although he’s now a poster child for the dangers of being rushed to the majors, Clyde was a sensation in his rookie season. The fledgling Texas Rangers, in their second year after the franchise moved from Washington, drafted Clyde No. 1 overall out of high school in Houston, where he had gone 18-0 with five no-hitters as a senior. Desperate to boost attendance, the Rangers summoned the 18-year-old lefty immediately to the majors. His debut brought the first ever sellout crowd in Texas, and fans poured to the ballpark whenever he pitched throughout the year.

The Orioles faced Clyde on Aug. 27 at Memorial Stadium, his 13th major league start. The Orioles chased him in the fourth inning, tagging him for three runs and six hits, including a Bobby Grich two-run homer. Clyde finished that season with a 5.01 ERA. His career lasted only 84 games, and he didn’t pitch in the majors past age 24.

“The Bird” took Detroit by storm in his debut season in ’76, when he went 19-9 with a league-leading 2.34 ERA to win the AL Rookie of the Year award and place second in the Cy Young race (well behind Jim Palmer). Beyond his impressive pitching performance, Fidrych attracted notice for his wacky antics, including talking to the baseball and circling around the mound. Sadly for Fidrych, it was all downhill after his rookie year. Knee and shoulder injuries ended his career after 58 games.

Fidrych faced the Orioles three times his rookie season, and he threw a complete game each time. The Orioles, though, managed to win two of those games. On July 29, Fidrych lost a 1-0 game to the Orioles’ Rudy May at Tiger Stadium — and the game’s only run scored on an error. Fidrych’s fielders abandoned him again on Sept. 7, when the Tigers committed four errors that led to three unearned runs in a 5-3 loss. Fidrych, though, did collect one of his 19 wins at the Orioles’ expense, throwing a shutout July 3.

Clemens, the Boston Red Sox first-round pick in the 1983 draft, built a reputation coming up through the minors, not just for his blazing fastball but also for his fiery and often abrasive demeanor on the mound. Although Clemens had major league success at a young age, winning both the AL Cy Young and MVP awards in 1986 at age 23, his rookie season of 1984 was unspectacular, as he went 9-4 with a 4.32 ERA in 21 games.

The Orioles ended up being Clemens’ most frequent opponent in the majors; he made 51 starts against them during his 24-year career, going 22-14 with a 3.53 ERA. His first one came on June 27, 1984, in his ninth major league start. Clemens gave up three runs (two earned) and 10 hits in 7 1/3 innings. Gary Roenicke tagged him for a home run, and Orioles starter Scott McGregor outdueled Clemens in a Baltimore victory.

Perhaps no pitcher attracted as much media attention as Abbott, and it wasn’t because he put up phenomenal numbers; his 4.25 career ERA in 10 seasons was about league average for his era. What was most remarkable about Abbott’s performance is that he did it despite being born without a right hand. The southpaw developed a pitching delivery in which he would balance his glove on the end of his right arm while throwing, then quickly slip the glove onto his left hand to be ready to field his position before the batter put the ball in play.

Abbott, a pitching star in college and the Olympics, drew a throng of press in all his early big league games. More than 150 media credentials were issued for his big league debut for the California Angels in 1989. He earned his first major league win at the Orioles’ expense in his third start, holding them to two runs in six innings at Anaheim Stadium on April 24. The Orioles got their revenge later in the season, tallying five runs in four innings against him June 22.

The legend of the hurler nicknamed “El Duque” grew before he even set foot on U.S. soil. Hernandez was the ace of the Cuban national team, and his half-brother Livan, the 1997 World Series MVP for the Florida Marlins, said, “He was better than me. The best pitcher in Cuba.” Orlando Hernandez was banned from the Cuban team because of suspicions that he intended to defect. In December 1997, he made a dangerous escape from Cuba and arrived in the United States, free to sign with a major league team.

The New York Yankees won the bidding for Hernandez’s services, and the 32-year-old had a sparkling rookie season in 1998, going 12-4 with a 3.13 ERA in 21 starts. Two of those outings were against the Orioles, and Hernandez won them both, allowing a total of three earned runs in 14 innings. In the second of those starts on Sept. 20, though, nobody watching the game was paying attention to Hernandez — because that’s the night that the Orioles’ Cal Ripken Jr., voluntarily took a seat, ending his MLB-record consecutive games streak at 2,632.

Sabathia, the six-time All-Star and 2007 AL Cy Young winner, is still going strong in the majors, carrying a 4-3 record and 3.18 ERA for the Yankees this season at age 37. But he was a 20-year-old pup when he made his major league debut against the Orioles on April 8, 2001. The Cleveland Indians’ former first-round pick, who made the club out of spring, was given a rude welcome to the bigs by coughing up three runs in the first inning, including a double, a walk, a wild pitch and a Jeff Conine three-run homer.

But Sabathia settled down after that and kept the Orioles off the board for the remainder of his 5 2/3 innings, and the Indians came back to win after he left the game. One weird aside to that game. The Orioles starter opposing 20-year-old Sabathia was 33-year-old journeyman lefty Chuck McElroy, who was making his third career start despite logging more than 600 appearances in the big leagues in 13 seasons. McElroy also received a no-decision. Sabathia faced the Orioles again two starts later, earning the win with a quality start in Baltimore. That was the first of his 19 career wins (and counting) against the Orioles.

A national sensation in Japan, Matsuzaka starred both in high school and in the Japan Pacific League, amassing a 108-60 record, 2.95 ERA and six All-Star appearances in eight seasons with the Seibu Lions. When he was made available for posting to the majors before the 2007 season, the Boston Red Sox swooped in with a $51.1 million posting fee and then inked him to a six-year, $52 million contract.

He faced the Orioles twice in his rookie season, both late in the year, and didn’t beat them either time. On Aug. 10, he dominated the Orioles for seven innings and left with a 5-1 lead, but the Red Sox bullpen blew it by giving up four runs in the eighth and a walkoff run in the ninth. On Sept. 8, the Orioles torched Matsuzaka for eight runs in 2 2/3 innings, including homers by notable Orioles’ sluggers Tike Redman and Scott Moore. Matsuzaka lasted eight years in the majors and is currently back in Japan, pitching for the Chunichi Dragons.

A longtime Orioles’ nemesis, Price has pitched for three of their AL East rivals — the Tampa Bay Rays, Toronto Blue Jays and now Red Sox. Price was the No. 1 overall pick in 2007 by Tampa Bay, and with the team closing in on its first playoff berth in franchise history the following season, he was called to the majors that September.

Price mainly pitched in relief down the stretch and in the postseason, but he started one game that year. Guess who he faced? Yes, it was the Orioles, on Sept. 22. Price pitched well, giving up two runs (one earned) in 5 1/3 innings in a no-decision. Lifetime, Price is 13-5 with a 2.77 ERA in 26 starts against the Orioles.

Darvish was one of the most coveted international players in MLB history when the Nippon Ham Fighters posted him before the 2012 season. Darvish had been scouted by big league teams dating back to high school, then cemented his reputation by pitching in the 2008 Olympics, the 2009 World Baseball Classic and seven years for the Fighters in the Japan Pacific League, where he was 93-38 with a 1.99 ERA. The Rangers submitted a record $51.7 million posting fee and signed Darvish to a six-year, $60 million contract.

The Orioles faced him only once in 2012, and it was one of their most memorable games in recent history: the first-ever AL Wild Card game, played in Arlington on Oct. 5. Though Darvish, on paper, had the matchup advantage over Orioles lefty Joe Saunders, the Orioles pulled out the unlikely victory by scratching across two runs against Darvish and holding on for a 5-1 win to move on to the Division Series. Darvish has made only one regular season start against the Orioles in his career, which didn’t come until 2016.

Two years after Darvish, Tanaka was the next big thing to come out of Japan. Tanaka put up video game numbers in his final season for the Rakuten Golden Eagles, going a perfect 24-0 with a 1.27 ERA in 27 starts in 2013 — and even picking up a save in the final game to seal Rakuten’s league title. That capped Tanaka’s seven-year career with the Golden Eagles in which he was 99-35 with a 2.30 ERA. The Yankees swooped in to add him, paying a $20 million posting fee and signing him for seven years and $155 million.

In 2014, before the Orioles faced Tanaka for the first time, Adam Jones sent New York media into a frenzy when he called Tanaka “nothing special” and mocked the hype: “Am I (supposed) to go home and say I faced Tanaka tonight? Just go throw a party that I faced Tanaka?” Tanaka, perhaps trying to prove Jones wrong, threw well in each of his two starts against the Orioles that year, holding them to three runs in seven innings each time. Surely it didn’t bother Jones, though, because the Orioles won both games.

All told, these rookie studs pitched 17 games against the Orioles, and although 12 of them were quality starts, the pitchers had a losing record overall: 5-7 with a 3.30 ERA.

The Orioles, it seems, have more than held their own against highly touted rookie pitchers in their franchise history. Considering the 2018 Orioles’ offense, though, it’s doubtful they would’ve had the same success against Ohtani this year.