A final look at WAR and the 2017 Orioles - BaltimoreBaseball.com

Welcome to the final edition of this year’s “Stats All, Folks.”

To close the book on 2017, I’m doing something a little different today. Instead of introducing a new sabermetric stat to analyze, I’m going to come full circle and call back to the first statistic I looked at this year: Wins Above Replacement.

You can check out my previous story for a complete breakdown of what WAR is and how it’s calculated.

Now let’s apply the stat to sum up the Orioles’ 2017 season. Which players provided the most value to the club, according to WAR? Which provided the least?

As a reminder, there are two versions of WAR that are most commonly used: rWAR (or Baseball-Reference WAR) and fWAR (or FanGraphs WAR). They’re calculated in somewhat different ways, which I’ll discuss in a bit.

The chart below lists 20 of the most prominent Orioles on this year’s club. (I’ve excluded position players who had fewer than 100 plate appearances and pitchers who worked fewer than 30 innings.) I’ve listed each player’s final rWAR and fWAR for the Orioles in 2017, as well as an average of the two WARs. 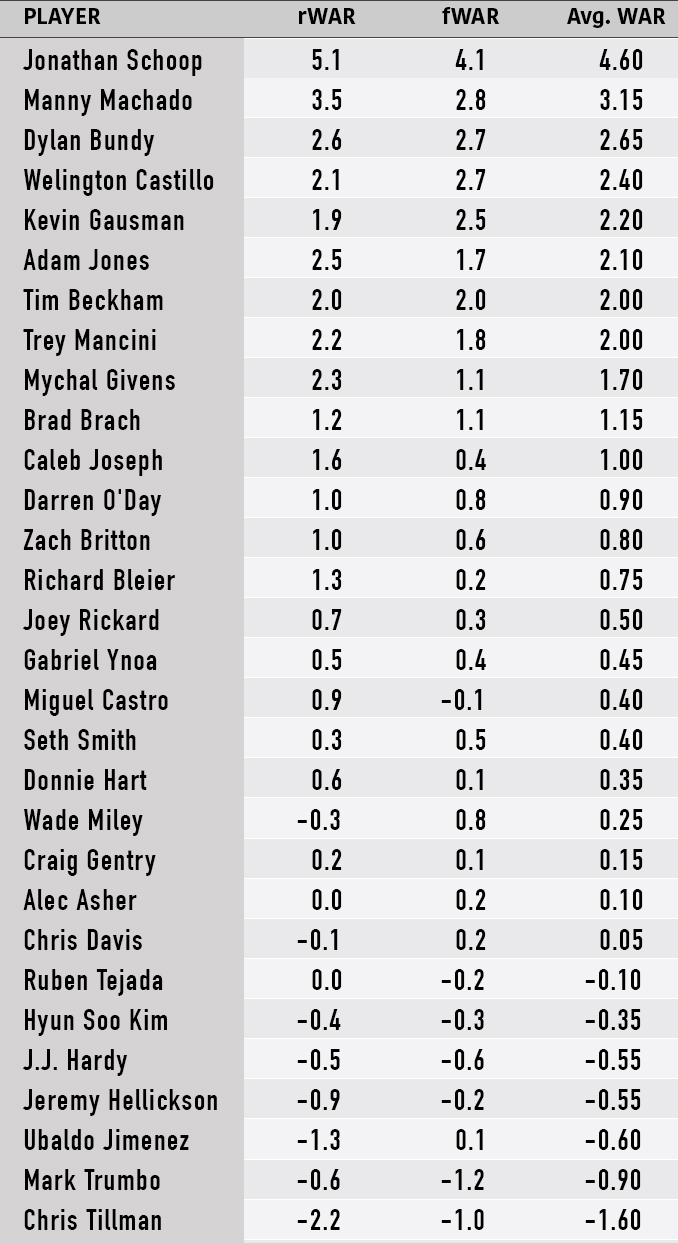 Both flavors of WAR agree that Jonathan Schoop, who was named 2017 Most Valuable Oriole, was deserving of that title. He had the team’s highest WAR by a comfortable margin. Both also rank Manny Machado as the second most valuable.

In many cases, rWAR and fWAR assess a player pretty similarly. For instance, both rate Tim Beckham as being worth 2.0 WAR for the Orioles, and other players have just a one- or two-point difference between the two stats.

But others have a more dramatic gap. Schoop and Machado, for example, rate noticeably higher in rWAR than fWAR. Other players have up to a 14-point difference in rWAR and fWAR.

Why the disparity? The reason is that the two versions of WAR use different metrics and calculations, based on which each site prefers.

One of the main differences for position players is the defensive and baserunning stats used to calculate WAR. rWAR uses Defensive Runs Saved (which I covered in a previous stats piece) while fWAR uses Ultimate Zone Rating, which has slight variations from DRS. Also, fWAR grades runners using Baserunning Runs (BsR, discussed here) while rWAR has its own unique method for evaluating baserunning.

There are other differences for hitters, as well. rWAR treats strikeouts differently from other types of outs; fWAR doesn’t. And the rWAR calculation considers league averages only within a league (AL or NL), while fWAR uses the league average across the entire MLB.

For pitchers, the contrast between rWAR and fWAR is even more stark. The major difference is that fWAR uses Fielding Independent Pitching (which, yes, I previously wrote about) as a baseline for its calculation, while rWAR uses ERA. So fWAR puts more stock into how a pitcher should have fared if he’d had a league-average defense and luck, while rWAR assesses the pitcher’s actual results on the field.

A few takeaways from the Orioles’ 2017 WAR ratings:

*fWAR is far kinder to the Orioles’ quartet of struggling starters — Chris Tillman, Ubaldo Jimenez, Jeremy Hellickson and Wade Miley — than rWAR is. fWAR rates each of them at least seven points better. It pegs Miley as worth 0.8 WAR (better than Seth Smith, among others) while rWAR has him at negative value (-0.1). fWAR also credits Jimenez with slight positive value at 0.1 WAR, a stark contrast to his awful rWAR (-1.3).

fWAR cuts Miley and Jimenez a bit of slack because their FIPs were better than their ERAs (in Jimenez’s case, more than a run better). They also had relatively high strikeout rates — 8.8 for Jimenez and 8.1 for Miley — which is a key element of fWAR. So fWAR suggests that Jimenez and Miley pitched a little better than their ERAs reflected but might have been victimized by bad luck and poor defense, while rWAR suggests no, they really did pitch horribly.

*On the flip side, fWAR gives no love to Richard Bleier and Miguel Castro, a pair of first-year Orioles who became integral parts of the club’s bullpen. Bleier’s 0.2 fWAR is 11 points lower than his 1.3 rWAR, despite a 1.99 ERA. And Castro, according to fWAR, actually had negative value at -0.1, while rWAR rates him at 0.9. That seems like a harsh evaluation for a pitcher who often ate up effective innings in relief to bail out starters who were chased early.

Again, the difference comes down to FIP vs. ERA. Both Bleier and Castro had low strikeout rates — 3.7 and 5.2, respectively — and their FIPs were significantly higher than their ERAs, so fWAR doesn’t see them as nearly as valuable as rWAR does.

*The two versions of WAR disagree on who was the least valuable Oriole of 2017. rWAR saddles Tillman (-2.2) with the lowest WAR, while fWAR ranks Mark Trumbo (-1.2) as the worst.

In fact, Tillman’s rWAR rates as the worst in the major leagues, while Trumbo had the second-lowest fWAR of any qualified position player in the majors, better only than Albert Pujols (-2.0).

It’s a toss-up as to which Oriole was worse. Both were plenty bad in 2017. Tillman went 1-7 with a 7.84 ERA in 24 games (19 starts) and didn’t record a win after his season debut. Trumbo, whose main job was to hit, batted .234 with a .686 OPS and 23 home runs, less than half his total from last year. He also struggled defensively during his infrequent appearances in right field.

The AL MVP and Cy Young votes should be fascinating this year. It appears to be a two-horse race between Judge and Altuve for MVP and Kluber and Sale for the Cy, and there are strong arguments to be made for each of them.