It happens every September.

Tune in to a press conference with Orioles manager Buck Showalter, and you’ll inevitably hear him grouse about MLB’s expanded-roster rules for the final month of the season.

To Showalter, it doesn’t make sense that baseball plays with one set of rules (a 25-man roster) for the first five months, then completely changes the complexion of the game in September by allowing for up to 40 active players per team.

Showalter brought it up during the Orioles’ previous homestand against the Toronto Blue Jays, who used 14 different pitchers — including two who made their MLB debuts – while splitting a four-game set.

“[It’s] September baseball at its best, where people are pitching that are good pitchers, good prospects, but there’s a lot of unknown and you get ambushed this time of the year easily,” Showalter said. “I don’t want it to come out as an excuse, but it’s tough. And it’s another thing that most who play the game don’t like about this time of year. But it is what it is, and we’re all playing under the same rules, so you deal with it.”

Here’s the funny thing, though. For someone who abhors the rules of September baseball, Showalter is one of the most successful September managers in the league.

Not including this season, in which the Orioles are a woeful 4-10 this month, Showalter has managed a club in September 17 times. In only three of those 17 Septembers did he have a losing record. (Regular-season games played in October also count as September games for this story.)

Showalter’s career September record (through 2016) is 264-223, good for a .542 winning percentage. He’s been especially good with the Orioles, going 118-86 (.578). He’s never had a losing September with the Orioles – that, of course, will change unless things improve dramatically in the club’s final 14 games.

How does that rate against other veteran managers? I compared Showalter’s September success to seven current AL skippers who have managed at least five years in the majors. 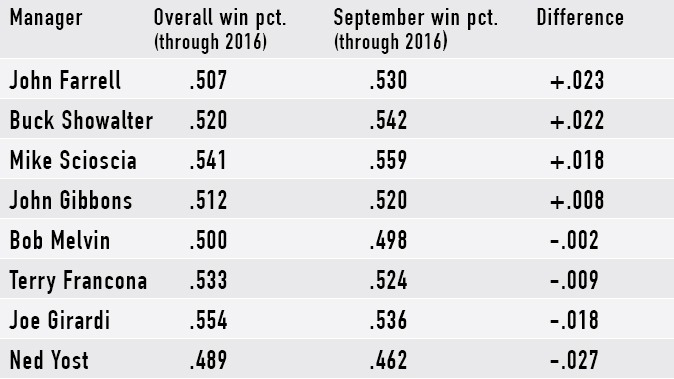 Showalter joins Boston’s Farrell as managers who have really upped their games down the stretch. At a time of the year when many teams are playing out the string or are simply out of gas, Showalter has a way of keeping his teams energized and winning in the season’s final month.

On the flip side are managers like Yost, who has had a winning record in only five of his 13 Septembers. Yost, in fact, was fired by the Milwaukee Brewers midway through September in 2008 — even though they were on their way to a playoff berth — because of a 3-11 slide in September.

Then there’s Francona, who has been a very successful manager overall, but doesn’t have a great track record in September. In 2011, he presided over the Red Sox club that collapsed to a 7-20 mark in September and blew a nine-game wild card lead to Tampa Bay in the final month. (Still, Francona isn’t having any trouble with September this year; his Cleveland Indians started 15-0 to extend a 22-game winning streak, before losing Friday.)

So far in his career, Showalter has mostly managed to avoid the September pitfalls that have victimized other long-time managers. He might not like the idea of an expanded roster, but when he has one, he tends to use it to his full advantage. He can bring in reinforcements for the bullpen

that let him give extra rest to his best relievers. He can load up his bench with pinch-hitters, pinch-runners and defensive specialists to employ at the most opportune moments.

For all his complaints, Showalter has more than made do with MLB’s September rules. When life gives you lemons, make lemonade — even if you don’t know why you’re still getting lemons after all these years, or why a whole new batch was delivered this month.