Just after celebrating the 25th anniversary season of Oriole Park at Camden Yards last weekend, the Orioles have another anniversary awaiting them today.

Except this is one they’d rather forget.

It was 10 years ago this afternoon — Aug. 22, 2007 — that the Orioles were the victims of the most lopsided drubbing in modern major league history, a 30-3 defeat to the Texas Rangers.

Even looking back at that Orioles-Rangers box score now, it seems unfathomable. Thirty runs? How? Are we sure this even happened?

Take it from someone who was there. It happened, and it was one of the most bizarre baseball experiences anyone will ever have.

I was covering that game in the press box and can still remember the surreal atmosphere at Camden Yards that day. As the Rangers’ run tally grew and grew to historic levels, and it became clear that this was no ordinary baseball game, team personnel scrambled to dig up research about all-time MLB blowouts. Reporters searched for the right words to describe the unprecedented carnage they were witnessing on the field. Rangers players seemed almost apologetic about continuing the onslaught, while Orioles players just wondered when the torture would end.

And, out in the stands, Orioles fans were unsure how to react to the unyielding offensive explosion. Their mood seemed to shift with every Rangers runner that crossed the plate. It started with a sense of resignation, then morphed into embarrassment and discomfort, and then transformed into pure curiosity and awe as fans realized they were witnessing history.

Some didn’t know what they were getting into at all. This was the first game of a single-admission doubleheader, so a handful of fans, who had showed up early for the second game, unwittingly walked into a massacre. (Among them were my parents, who called to inform me that they weren’t having a very good time.)

As it happens, I had decided to write my game recap as a live blog, updating my story on the web site at the end of every inning. I lived to regret that decision. By the end, the recap read like a chronicle of one man’s gradual descent into madness.

That story, by now, has been lost to the far corners of the internet. But I still have the scorecard I filled out that day. It’s a cluttered, jumbled mess, and not just because of my terrible handwriting. 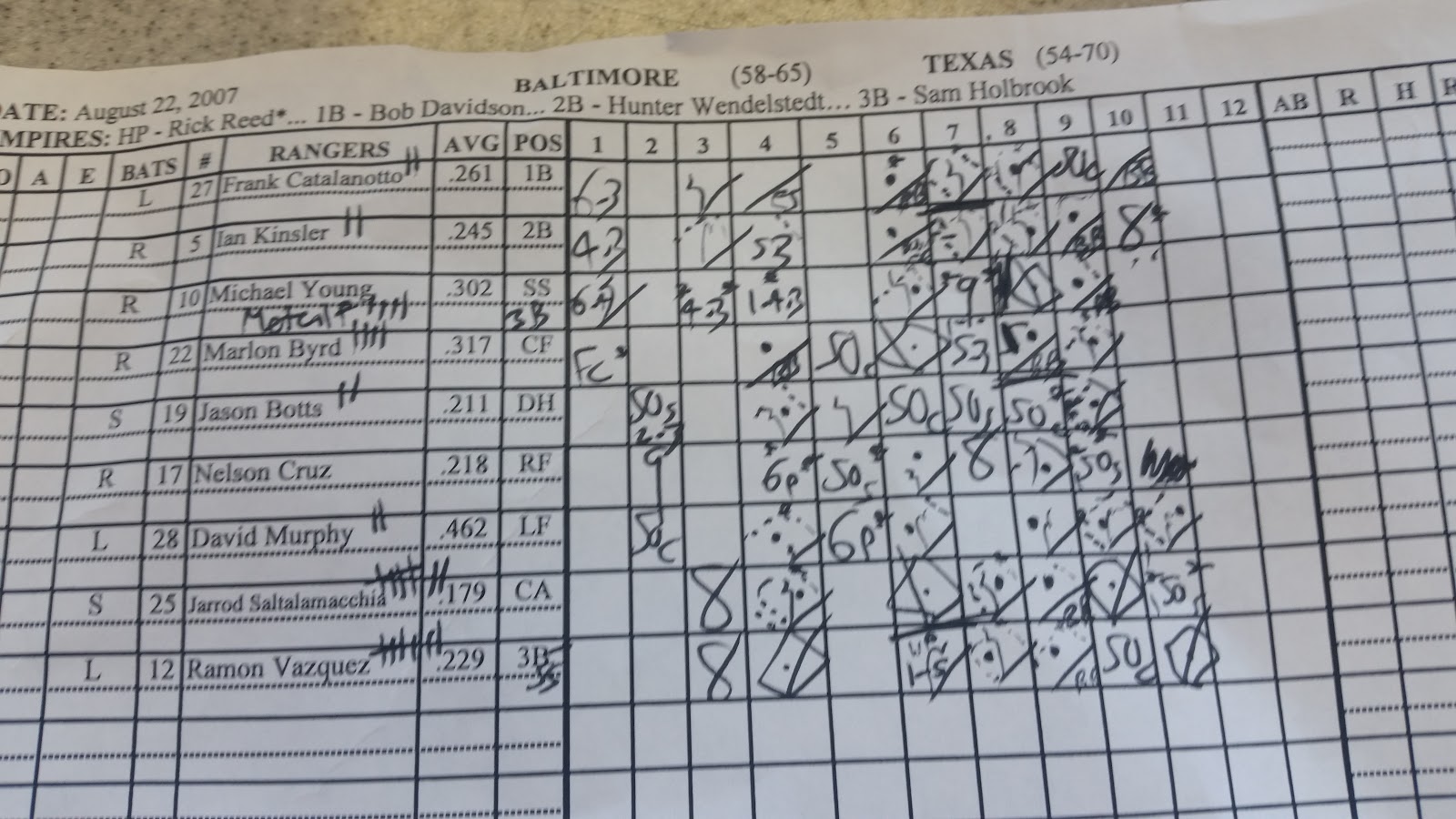 The statistics are staggering. Every Rangers starter had at least two hits (the team had 29). Eight of the nine scored at least two runs; the only exception was shortstop Michael Young, who scored just once (but in his defense, he left the game in the seventh inning). Eight batters had multiple RBIs.

The Rangers hit two grand slams — one by cleanup hitter Marlon Byrd and the other by infielder Travis Metcalf, who didn’t enter the game until the seventh.

And, in that pre-replay era, I distinctly remember a blown call by first base umpire Bob Davidson that extended a Rangers rally on what should’ve been an inning-ending groundout. Nothing could put a stop to the Orioles’ agony that day.

The clubhouse was closed to the media between games of the doubleheader, so players weren’t immediately available for comment. That left manager Dave Trembley to speak for the team.

Trembley began his press conference with a comment along the lines of, “I’ll answer any serious questions you have.” Not that reporters needed the reminder, but the message was clear: This wasn’t a laughing matter. As absurd as the game was, the team wasn’t in the mood for wisecracks or needling.

“It’s been a long day,” Trembley said after the game. “Whatever we threw, they hit it. They say hitting’s contagious, and that certainly was the case in the first game. I’ve never seen anything like it.”

Everyone remained professional, but I couldn’t help but feel genuinely terrible for Trembley, one of the nicest people you’ll ever meet. Earlier that day, the Orioles had named Trembley their manager, removing the “interim” label that he’d held since taking over for Sam Perlozzo on June 19. It was a dream come true for Trembley, a baseball lifer who’d managed in the minor leagues for 20 years before getting his first crack at a major league gig.

What was supposed to be a celebratory day for Trembley was marred by the Orioles’ record-shattering defeat. In hindsight, it might have been an omen for his embattled tenure as the club’s skipper. The Orioles went 187-283 under Trembley before he was let go in June 2010.

None of the players or coaches involved in the 30-3 game are still with their clubs today, but three members of that Rangers lineup are still active in the majors: second baseman Ian Kinsler (now a Detroit Tiger), Seattle Mariners and one-time Orioles slugger Nelson Cruz, and Saltalamacchia, who was released by the Toronto Blue Jays earlier this season.

Only one Oriole who played in that game is still active in the bigs: now-Atlanta Braves right fielder Nick Markakis, who was in his sophomore season. He had one hit in three at-bats.

Here’s just a few of the many ridiculous tidbits about the game:

** The Orioles held a 3-0 lead in the game before the Rangers scored 30 unanswered runs.

** The Rangers actually had more innings in which they were held scoreless (five) than in which they scored (four). They plated five runs in the fourth, nine in the sixth, 10 in the eighth and six in the ninth.

** Against all odds, the Orioles didn’t use a position player to pitch. That’s right, all four of their hurlers that day were guys who were actually paid to be major league pitchers. Each gave up at least six runs — starter Daniel Cabrera allowed six in five innings; lefty Brian Burres, eight in 2/3 of an inning; righty Rob Bell, seven in 1 1/3 innings; and 36-year-old veteran Paul Shuey, nine in two innings. It was the final big league season for both Bell and Shuey.

“I had one buddy call and ask me if I was trying. I said, ‘Yeah, I really was,’” Shuey later told the Associated Press.

** Incredibly, Rangers reliever Wes Littleton was credited with a save. He finished the game with three scoreless innings, and by the letter of the rule, that’s enough to earn a save — even in a 27-run victory. (In fairness, the Rangers were only leading by 11 runs when he came in. So, you know, it was a totally different ballgame.)

Before that, the largest margin of victory in a game with a save was 19 runs. Coincidentally, it was also in a Rangers win over the Orioles, a 26-7 decision April 19, 1996. Left-hander Ed Vosberg got the last out of the eighth inning in a 10-7 game before the Rangers scored 16 runs in the bottom half.

** The Orioles introduced their newly signed draft pick, Matt Wieters, to the crowd during that game. He was supposed to go into the clubhouse to meet the players in between contests, but, as the nightmare escalated, Wieters smartly decided to bag that idea.

** Finally, a few thoughts from then-Orioles second baseman Brian Roberts, courtesy of Dan Connolly’s 100 Things Orioles Fans Should Know & Do Before They Die: “People are going to laugh about it and say, ‘Is that even possible?’ or ‘How did that happen?’ That’s just the way it is. It was just one of those nights. It’s not like we were a joke. We didn’t kick balls around, make 15 errors. It was just one of those nights where nothing went right for us, and everything went right for them.”

Roberts was putting it mildly. It wasn’t just “one of those nights” — it was an unforgettable night, one in which the Orioles made history for all the wrong reasons.