With just a few days until the Aug. 1 non-waiver trade deadline and the Orioles sitting atop the American League East, trade talk in Birdland is in full swing. An acute need for starting pitching and a thin farm system could be a tricky equation for GM Dan Duquette, which is why one of the team’s only upper-echelon prospects – Chance Sisco – appears to be prominent in discussions.

There are plenty of reasons to deal the young catcher if you’re the Orioles. It’s a position of depth in their minors, with Jonah Heim and Alex Murphy a few rungs lower on the depth chart. And, more important, adding an extra piece or two right now for the major league club could help push the Orioles back into the playoffs for the third time in five years. There are plenty of legitimate reasons to trade Sisco, but that’s not what this is.

This is a case for keeping him.

It’s easy to talk about what Chance Sisco can’t do. We’ve heard the reports about his defense; that he might not be good enough to stick behind the plate. We’ve heard about the lack of power; he’s hit just two home runs in 357 plate appearances this year.

But if we’re going to talk about what he can’t do, it’s only fair to highlight his strengths as well. And Chance Sisco has one major strength: he can flat-out hit.

As a 21-year-old playing a full season at the Double-A level, Sisco is hitting at a .322 clip. And it’s not a hollow .322 either. It comes with a 12.3 percent walk rate, adding up to a .410 on-base percentage. You know, the skill the major-league Orioles always seem to need more of.

A guy this young hitting this well against Double-A competition sounds awfully good, right? But just how good? Let’s attempt to answer that by putting the performance into context.

Since 2006, there have been 3,068 individual player seasons of at least 250 plate appearances at the Double-A level. Just 233 of them (7.6 percent) have been by players 21 or younger. In other words, playing regularly at Double-A as a 21-year-old is plenty rare and a real accomplishment. But here’s where things really get interesting.

Filtering the list further to reveal the 21-or-younger players with on-base percentages of Sisco’s caliber (let’s say .390 or better) leaves you with just 16 names. Sixteen players out of more than 3,000 over that span, or 0.5 percent. They are: 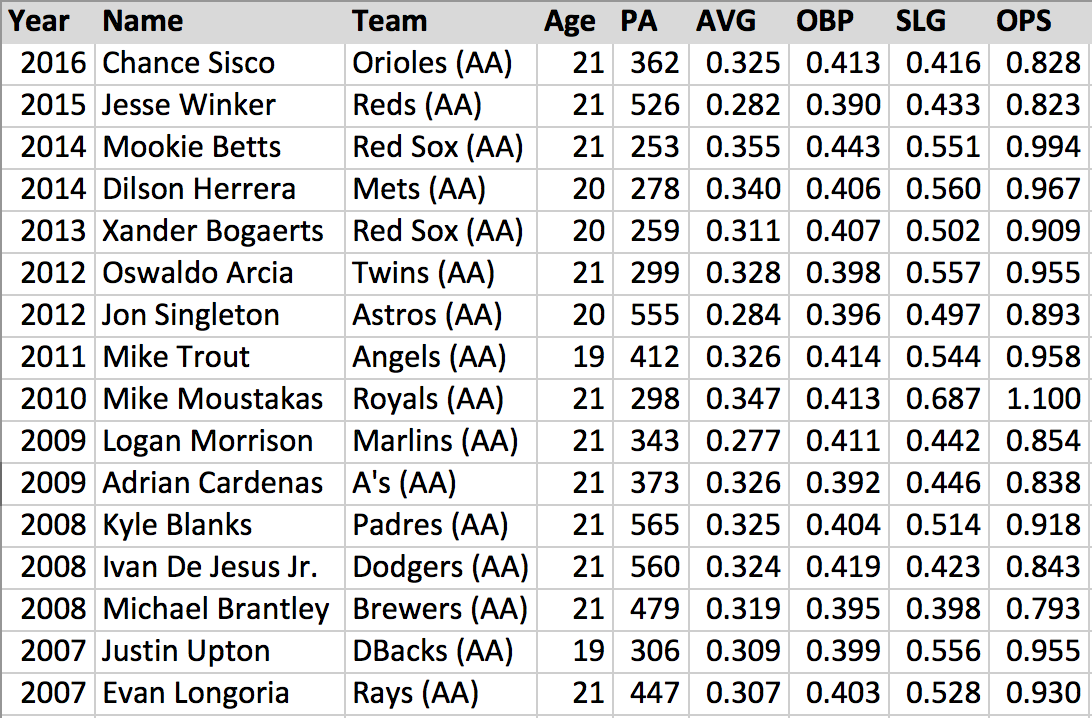 I’ll let the numbers speak for themselves, but this is a pretty impressive group. Nearly half have become bona fide, elite-level hitters in the majors, along with a few solid regulars sprinkled in. For Sisco and a few others on the list, it’s simply too early to know.

What we do know is that Sisco, even despite Matt Wieters’ pending free agency after the season, could be available on the trade market as the Orioles attempt to fortify their starting rotation. It remains to be seen whether he’ll be the next Jake Arrieta or Zach Davies or Josh Hader or Eduardo Rodriguez – a painful, long-term sacrifice at the expense of potential short-term gains. There seems to be a split within the organization on whether Sisco should be next in line. It’s easy to see why.