Brooks, Boog and Palmer reminisce about the 1966 title - BaltimoreBaseball.com 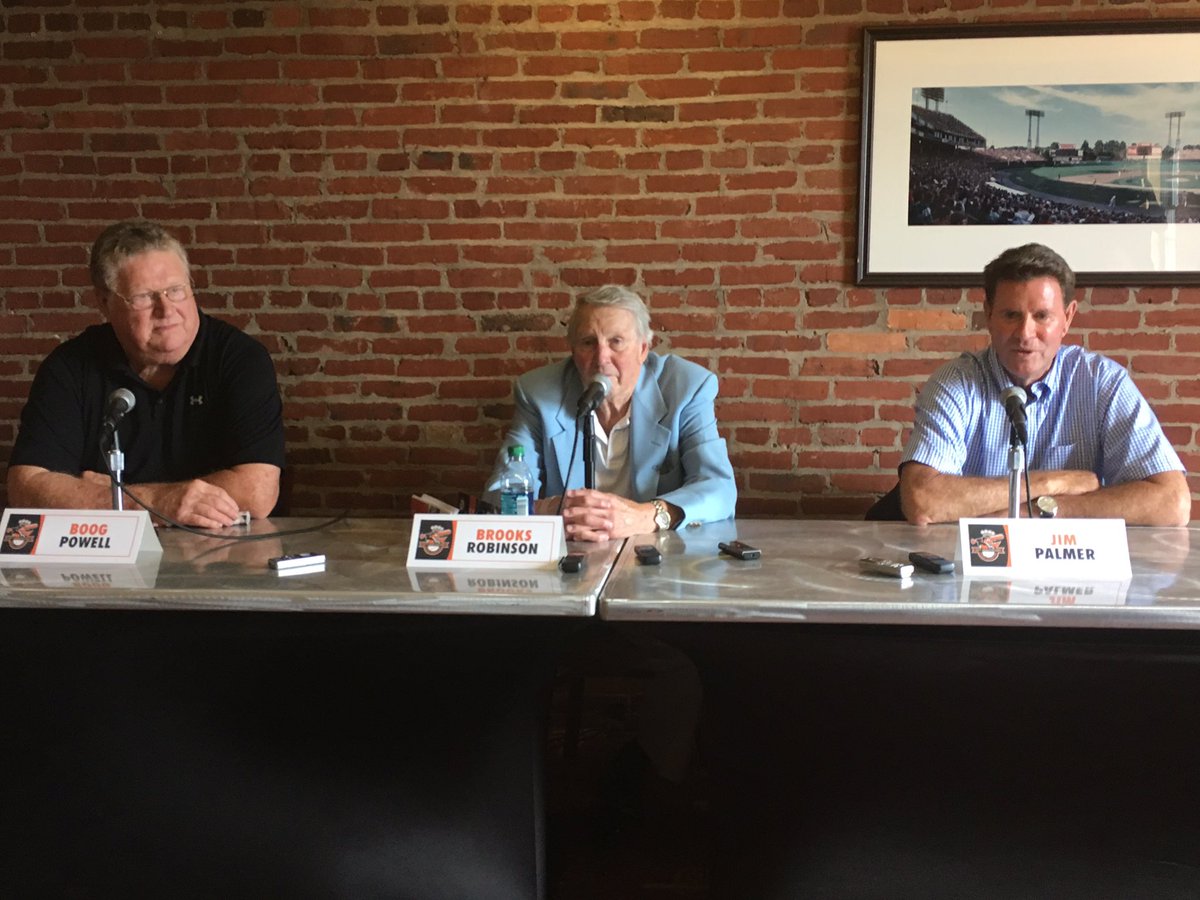 The Orioles will host their 50th anniversary celebration of the 1966 World Series team tonight at Camden Yards.

This afternoon several members of that team were on hand for press conferences at the warehouse. They talked about beating the mighty Los Angeles Dodgers in four games after being the underdog, what that season was like and how that club started a run of four Orioles’ World Series appearances in six years.

Here are some quotes from the conference that featured Boog Powell and Hall of Famers Jim Palmer and Brooks Robinson:

Powell on what was the coolest thing said to him so far today: “Thanks for the memories. (And I said), ‘Thanks for remembering.”

Robinson answered the same question: “Thanks for being here,’ mainly. I saw a lot of people I haven’t seen for some years. That was nice.”

Palmer on the experience of the 1966 World Series: “It’s pretty surreal to go into a World Series for the first time. I don’t care if you are young or old or older. And four games and you walk out (with a title), especially the way the games were.”

Powell on the last out of Game 4: “It was like, ‘When is this coming to an end? Is our bubble going to burst now?’ And then the fly ball goes to Paulie (Blair) and it’s all over.”

Robinson on 20-year-old Palmer’s victory against Sandy Koufax in Game 2 of the World Series: “I didn’t think much about it really. We thought about Koufax and what a great pitcher he was …. (But) Palmer just pitched like Palmer pitched.”

Robinson on facing Koufax in the Hall-of-Fame lefty’s last start: “I don’t think hitting off of Koufax — that wasn’t like Nolan Ryan. When I hit off Nolan, he scared the hell out of me, because he didn’t know where it was going all the time. Koufax, you knew it was going to be right on the corners and he just gets it there a little faster than anyone else and you’ve just got to be ready.”

Palmer on facing Koufax: “I was born in New York, but I went to the Coliseum, I went to Dodger Stadium, it was Sandy Koufax. … I just didn’t want to really embarrass myself for the club.”

Palmer on pitching on the biggest of all stages: “I don’t think anything changes. I think that’s the great thing. If you’re prepared, you just go out and compete. To me that’s the great thing about the game. We were all good athletes, we played other sports. You played with the big boys when you grew up. That was a big boy moment when you’re pitching against Koufax.”

Palmer on Moe Drabowsky’s outstanding relief performance in Game 1 (one hit and 11 strikeouts in 6 2/3 innings): “Moe set the tone. Mow came in and Moe could pitch… Everybody talks about the Frank Robinson trade. We got Moe for $25,000. … I don’t think anybody when Moe came in felt like we weren’t going to get as good of a performance as we did. The Orioles were real good at adding players.”

Robinson on the legacy of those four World Series teams: “The disappointing thing was losing two of them, which we were favored to win. If we would have won those two, I mean our group would have gone down as one of the greatest ever, that’s the way I feel. … But you’ve got to win in this game, you can’t be second best and we didn’t do it (all four times).

Robinson on if it seems like 50 years ago: “Sometimes, honest to God, I don’t remember even playing.”

Palmer interrupted Robinson: “By the way, you were pretty good.”

More Robinson, a 16-time Gold Glover: “I see Machado make a great play, and I said, ‘Man did I ever do that?’ I know I did, but I just don’t think about it. It just goes by like that.”