The 2022 Orioles surprised in the season of the 'reverse lock' - BaltimoreBaseball.com 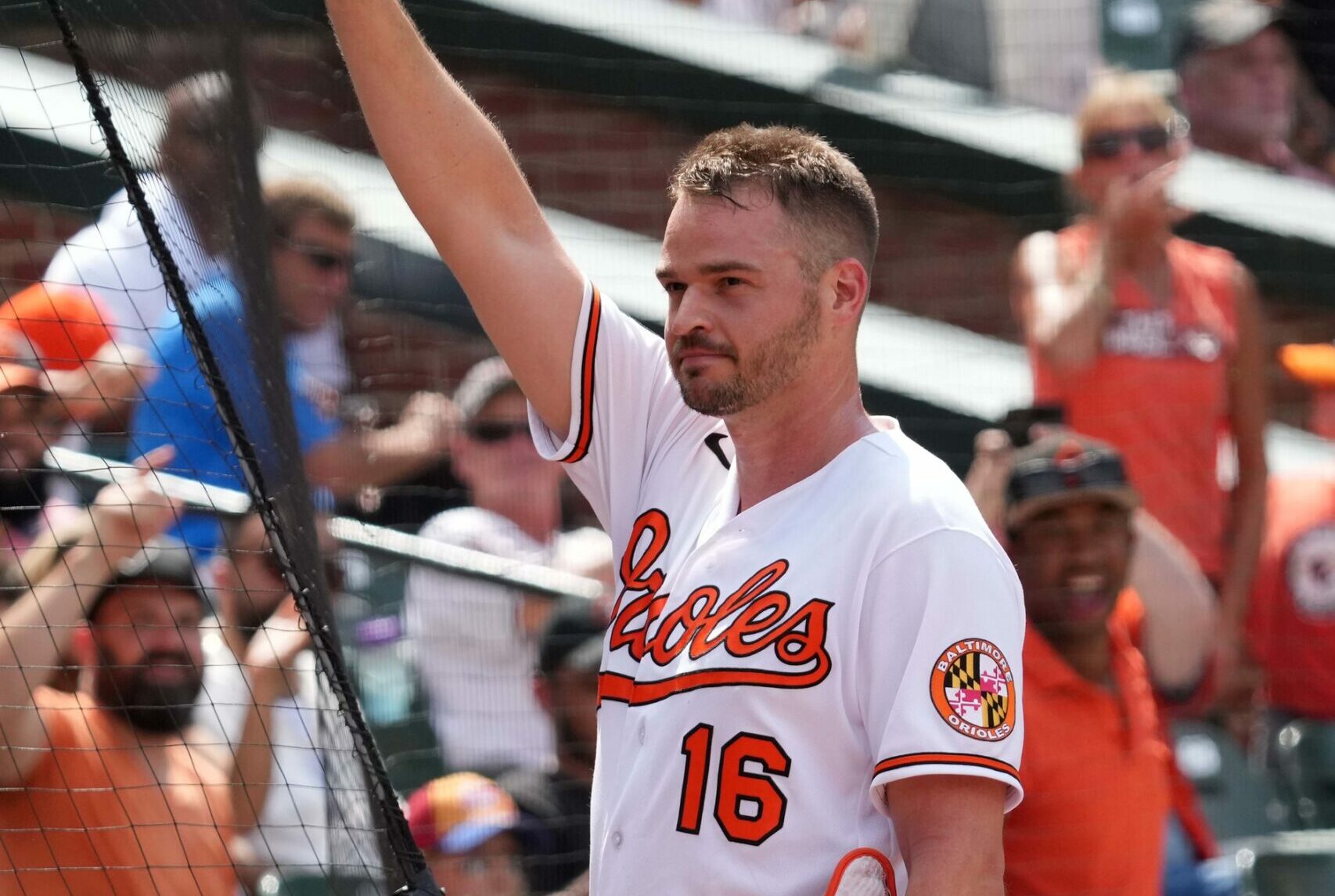 Longtime Baltimore baseball writer Jim Henneman coined the phrase “reverse lock.” That’s when a team is so assured of losing that it’s a lock to win. When the 2022 season began, most predicted the Orioles would be slightly better, but could still lose nearly 100 games. It turned out not to be the case.

As we put 2022 behind us, let’s look at the storylines and datelines of the surprising Orioles season, the season of the reverse lock.

After a three-month plus lockout by Major League Baseball, the Orioles reported for spring training and prepared for a 162-game season that would start in less than a month.

John Means, the Orioles’ player representative, thought it was a fair deal. Trey Mancini, a year removed from his season away because of colon cancer surgery and chemotherapy, echoed Means’ sentiments.

Cedric Mullins, who revealed during the lockout that he had surgery for Crohn’s disease in November 2020, said he chose not to share details about his illness because he didn’t want to take attention away from Mancini.

“His accomplishment surely outweighs mine,” Mullins said. “That was his moment for sure.”

Just five days before their season opener, the Orioles surprisingly trade two of their top relievers, Tanner Scott and Cole Sulser, to the Miami Marlins.

The Orioles are swept in the first three games of the season against the Tampa Bay Rays and outscored, 15-4.

DJ Stewart strikes out in each game and will never play again for the Orioles. Dean Kremer injures his left oblique muscle and will miss two months.

Because of the Scott and Sulser trades, there are some openings in the bullpen and an enormous young right-hander — 6-foot-8, 280-pound Félix Bautista — makes his debut against the Rays and throws a scoreless 1 1/3 innings.

The Orioles’ home opener is scheduled for the next day.

“I think we’re looking forward to being home,” Hyde said.

The Orioles record their first win of the season and much attention is on the new left-field wall, which is about 30 feet higher and nearly 6 feet higher. The team hopes that fewer home runs will mean more wins for the Orioles.

“It’s large,” Mancini said. “It was a little more jaw-dropping than I though. It will take a little bit of getting used to.”

Mancini won’t ever get used to it.

Means, who started the season opener, leaves after four innings because of forearm tightness.

“There’s not a ton of concern,” Means said. “I told them I could go back out there. I wanted to make sure.”

Two days after Kyle Bradish strikes out 12 in seven innings and records his first major league win, the Orioles pull off an unlikely 3-2 victory over the Cardinals.

Hyde belatedly finds out that St. Louis is starting left-hander Stephen Matz. Had he known ahead of time, he would have started right-handed hitting catcher Robinson Chirinos, who played the night before.

“We pieced it together there,” Hyde said. “We give up two runs to these guys on a bullpen day. That’s pretty good.”

After missing the start of the season because of a sore right triceps muscle, catcher Adley Rutschman makes his major league debut.

He triples in an 8-1 loss, but the crowd of 17,573 is on the smallish side. It’s Preakness Saturday and Rutschman’s addition was only announced 11 hours before gametime.

“Obviously special that a lot of people were cheering tonight,” Rutschman said. “I can’t wait to get to that normal, everyday team aspect.”

News breaks of a lawsuit by Louis Angelos, who sues his brother, John, the team’s chairman and CEO, and his mother, Georgia, over control over the team.

The Orioles are 24-33 when the suit’s news is revealed. Three days later, John Angelos is thrilled by the sellout crowd at Oriole Park for a Paul McCartney concert. More thrills await the Orioles.

After closer Jorge López takes two ninth-inning losses in Minneapolis, the Orioles win, 3-1. In a July 4th home game, the Orioles win in 10 innings when shortstop Jorge Mateo is hit by a pitch with the bases loaded.

“There’s a lot to unpack in that game,” Hyde said.

The Orioles would go on to win 10 straight, their longest winning streak in 23 years, and concluded it with a two-game sweep at Wrigley Field.

Trade talk envelops Mancini, who chats about Notre Dame football as he dresses before a Thursday afternoon game. He began the day by catching a first pitch from Sonsy Gaba, whose son Mo died exactly two years ago.

Mancini ended it with an unlikely inside-the-park home run in what was expected to be his final home game with the Orioles.

“I had some help from somebody,” Mancini said. “That was absolutely insane.”

In their first home game since Mancini and López were traded, the Orioles celebrated the 30th anniversary of Camden Yards.

Among those who were back were Rick Sutcliffe, who pitched the first game in the park in1992; Mike Mussina, who was the best pitcher for the Orioles during their years there; and Robert Andino, whose 2011 heroics knocked the Red Sox out of the postseason.

Among those who weren’t there were Cal Ripken Jr., Adam Jones and Nick Markakis.

“Those fans that were here 30 years ago, they’ve got an exciting team to watch again,” Mussina said.

Drew Rasmussen retires the first 24 Orioles before Mateo doubles to begin the ninth. The Orioles are one-hit in the 4-1 loss.

“It was quick innings. I barely had time to sit down,” Lyles said. “Outings like that are special. You need to have some luck on your side.”

The Orioles defeat the Boston Red Sox at tiny Bowman Field in the Little League Classic. Early Sunday morning, the Orioles arrived in Williamsport and spent a few hours chatting with Little League World Series participants, sliding down a hill with cardboard and waiting out a hard rain that let up a few hours before gametime.

Former President George W. Bush was one of the 2.467 spectators.

“It started to feel like a playoff game in this a lot smaller stadium,” Hyde said.

The Orioles face Mancini for the first time since the trade. Dillon Tate strikes out his former teammate on three pitches to end the game.

“I’ve been kind of thinking about that for a few weeks,” Tate said. “Didn’t know how it was going to play out and it was funny that I found myself on the mound face-to-face with him.”

Gunnar Henderson makes his major league debut and his first hit was a home run. When he ran around the bases, his helmet flew off.

“Every time I swing it comes off,” Henderson said “I guess I’ve got too much hair going on.”

Mancini returns to Baltimore. He’s not hitting, and Astros manager Dusty Baker will sit him later in the series.

“I know on the field we had our share of struggles during my time,” he said. “There were a lot of good times throughout, too.”

The Orioles arrived at Yankee Stadium determined to avoid allowing Aaron Judge’s record-breaking 62nd home run. Before the first game of the series, it felt like a postseason event with plenty of people on the field.

“I’ve never seen a potential milestone like this,” Hyde said. “I’m hoping he waits until next series.”

Judge doesn’t come close to homering in the series, and after the final game, he passed a group of Oriole reporters in the hall. He said hello and asked for directions to the visiting clubhouse. He didn’t sign with the Orioles.