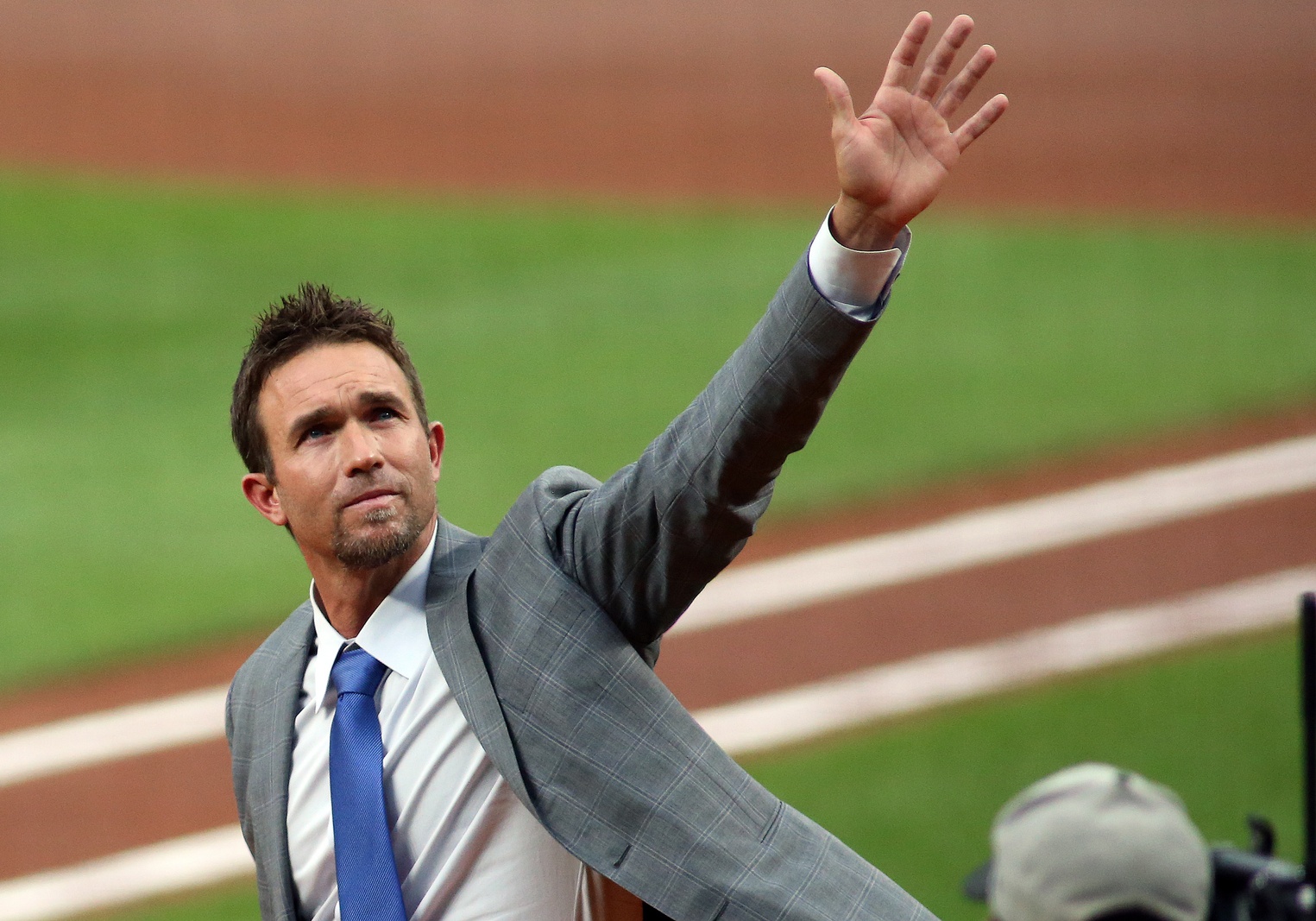 J.J. Hardy isn’t a Hall of Famer. He might not get a single vote for the Hall of Fame, but the longtime Orioles’ shortstop is on the ballot sent to 10-year members of the Baseball Writers’ Association of America on Monday.

Hardy is the first key player of the last group of Orioles who played in the postseason to appear on a ballot. In coming years, Jim Johnson, Matt Wieters, Nick Markakis and Adam Jones could get that opportunity.

In order to appear on a Hall of Fame ballot, players must play 10 years in the major leagues and be approved by a screening committee. Ubaldo Jimenez, who pitched for the Orioles from 2014-2017, was one of those whose numbers weren’t deemed good enough, but Hardy’s was.

There’s only one other former Oriole on the 28-player ballot, but Francisco Rodriguez barely qualifies.

“K-Rod,” the longtime excellent reliever threw only 22 of his 976 career innings in an Orioles uniform, and his 24.2 WAR (Wins Above Replacement) is the third lowest on the ballot, above only Los Angeles Dodgers outfielder Andre Ethier and reliever Huston Street.

Rodriguez, Ethier, Street and Hardy are among the 14 first-time finalists. Of those, only Carlos Beltrán, who had a 70.1 WAR, nine All-Star Game appearances, 2,725 hits, 435 home runs and an .837 OPS, is given much of a chance to get into the Hall of Fame.

Werth was the Orioles’ first-round pick in 1997 as a catcher and was traded to Toronto in December 2000 for pitcher John Bale. He converted from catcher to the outfield and had an outstanding career, primarily with Philadelphia and Washington.

Most of those 14 won’t get enough votes to be considered a second time. Among the 12 first-timers up for consideration a year ago, only three — David Ortiz, who was elected on the first ballot; Alex Rodriguez (34.3 percent); and Jimmy Rollins (9.4 percent) exceeded the 5 percent threshold for continuing.

Candidates can stay on the ballot for up to 10 years. Only Kent is in his final year of eligibility.

Beltrán’s involvement in Houston’s electronic sign-stealing scandal in 2017 might cause some voters to shy away, at least for now.

His Defensive WAR (17.5) was nearly as high as his Offensive WAR (19.4) and, like Markakis, Hardy was the antithesis of a self-promoter and the forceful captain of the infield.

He was so well respected that Manny Machado, who grew up playing shortstop, willingly moved to third until Hardy left the Orioles after the 2017 season.

It was fortunate for Hardy, who was elected to the Orioles’ Hall of Fame in 2021, that he wasn’t around to witness the embarrassing 2018 season when the team lost 115 games and began the painful rebuild, which is now beginning to pay off.

No, Hardy’s not a Hall of Famer, but just being one of a few who get on a Hall of Fame ballot is cause enough to salute an excellent Orioles career.

Kjerstad gains notice: Because the Orioles played surprisingly well in 2022, there wasn’t as much attention paid to the minor leaguers who played in the Arizona Fall League. One of them, pitcher Noah Denoyer, was added to the 40-man roster last week. Another, outfielder Heston Kjerstad, was named the Arizona Fall League’s Most Valuable Player.

Kjerstad was the second overall pick in 2020 and didn’t play that year because of the canceled minor league season. He missed 2021 because of myocarditis, an inflammation of the heart muscle.

Kjerstad didn’t play this year until June because of a hamstring injury, but he put up video game numbers at Single-A Delmarva when he hit .463 with a 1.201 OPS in 22 games. He struggled at High-A Aberdeen, hitting .233 with three home runs and 20 RBIs in 43 games.

Two other recent high draft picks, Gunnar Henderson and Colton Cowser, also had disappointing numbers with the IronBirds, but did better when they moved up.

In 22 games in the Arizona Fall League, Kjerstad hit. 357 with a 1.007 OPS, five home runs and 17 RBIs. He struck out 31 times and walked just five times. As a left-handed hitter, his swing could be built for Oriole Park, and although he’s a year behind where he should be, Kjerstad is quickly catching up.

The guess here is that he begins the year at Double-A Bowie. He doesn’t have to be placed on the 40-man roster until a year from now, but it will be interesting to see his progress in 2023 and how quickly he moves from Bowie to Triple-A Norfolk. His Arizona Fall League performance should allow him to return to the Top 100 prospect list soon; Kjerstad is MLB Pipeline’s ninth-rated Orioles prospect.