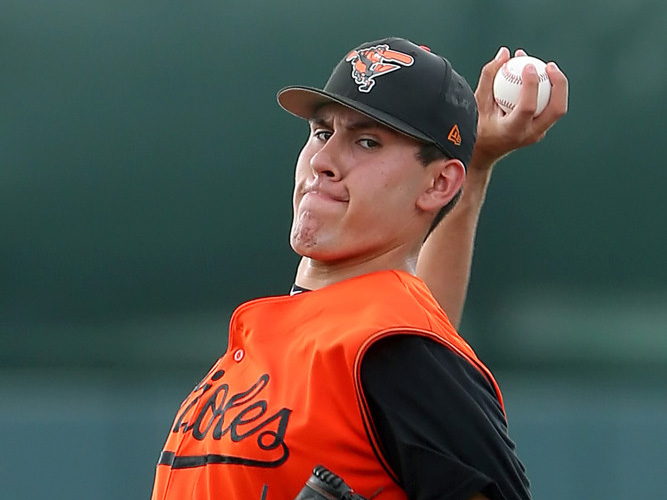 Baseball’s top pitching prospect, Grayson Rodriguez, turned 23 on Wednesday, one day after the Orioles placed him and four others on their 40-man roster. The move was expected, but in some ways disappointing because had Rodriguez not suffered a lat strain when he was pitching for Triple-A Norfolk on June 1st, he would have been called up to the Orioles in 2022.

“It was close, getting sidelined there for a little bit,” Rodriguez said in a Zoom call. Rodriguez wasn’t able to pitch for three months. After six starts, one for High-A Aberdeen, two for Double-A Bowie and three for Triple-A Norfolk, his season ended, and there was no call from the Orioles asking him to pitch in one of the final games.

“Not getting the call lets you know the season is over,” Rodriguez said. “I was waiting tor it. It didn’t come, and obviously from a player’s perspective, it’s pretty disappointing, but all you can do is look forward to the next opportunity.”

The next opportunity will come in about three months when pitchers and catchers report to Sarasota for spring training, and Rodriguez is expected to be in the Orioles’ starting rotation come late March.

“It’s full speed ahead,” Rodriguez said. “We’re focused on the big leagues. Of course, injury kind of derailed it last year, but moving forward, that’s definitely in my focus.”

While Rodriguez was out, the Orioles played well, and he was disappointed he couldn’t play with the team that made him its first-round pick in 2018 and improved by 31 games in 2022.

“I’d say it’s tough to watch, but also I watch the Orioles games every night,” Rodriguez said. “There’s a lot you can learn from them on TV, just watching those guys play. It’s a tough situation, no matter when you’re injured. Got through it and watching a lot of baseball.”

Rodriguez wants to make sure there’s no recurrence of the injury.

“Focusing on the lat and getting it stronger,” Rodriguez said. “In the weight room, making sure the body’s right going into spring training. I guess anything that the Orioles will see fit from bullpen videos, mechanics-wise,  working that speed. Right now, making sure we get a good base in the weight room.”

Rodriguez says he feels 100 percent. “Halfway through November, and that’s all you can ask for,” he said.

“Obviously it’s an honor to get put on anybody’s 40-man, especially ours,” Rodriguez said. “Pretty excited, pretty pumped up for it. I can’t wait for spring training. Just looking forward to what this year has in store, just getting back out there, throwing the baseball.”

After Rodriguez’s first full pro year in 2019, he didn’t get to pitch the next year because of the pandemic. He pitched simulated games at the alternate site at Bowie.

“That’s up to them,” Rodriguez said. “It’s something that’s out of my control. There’s a lot of important people that we have that work for the Orioles that determine that. If it was up to me, it would be as many as I could throw. I’ll figure that out when we get to spring training.”

Rodriguez said his best games came early in the 2022 when he appeared on the verge of a recall. He struck out 109 batters in 75 2/3 innings, walked 28 and allowed two home runs.

“I think it’s just a little added experience,” he said. “That being my third full season in pro ball, understanding your strengths and your weaknesses. The Orioles have done a good job of getting information on me and what I do the best and go out and using that each and every start. Getting a little bit older, getting a little bit smarter with the game.”

Much is expected from Rodriguez, who has waited nearly five years to make his major league debut.

“This is a big project that’s nowhere near complete,” he said. “Maybe we’ll look back at that at the end of my career and see that we’re good. Right now, all aspects of the game, mechanics, pitch movement, speed, velocity, everything, that’s what we’re working on.”